Giorgio De Chirico and the Myth of Ariadne

Giorgio de Chirico and the Myth of Ariadne

Giorgio de Chirico's (1888-1978) enigmatic, haunting paintings of deserted city squares, shadows, sleeping statues exerted an important influence on modern art. His Metaphysical works began around 1912 with a series of eight paintings of the Greek myth of Ariadne. In these works the artist depicted a reclining statue of princess Ariadne in an empty Piazza.

According to classical legend, Ariadne, daughter of Pasiphae and the Cretan king Minos, fell in love with Theseus, the Athenian hero. By giving him a length of silk thread she helped him to escape the labyrinth in which the man-eating Minotaur lived. Theseus promised to marry Ariadne during their journey to Athens but instead he betrayed her, abandoning her on the deserted island of Naxos. She was later rescued by the god Dionysus.

The melancholic story appealed to classical artists who typically portrayed her slumbering upon empty shores. For Greek born, Italian de Chirico, the abandoned princess took on a rich metaphorical meaning. She represented the classical past of his homeland and was also singled out by Friedrich Nietzsche, with whom de Chirico had an artistic affinity, as being a symbolic figure with contemporary relevance. For Nietzsche the labyrinth from the Greek myth could be equated, in contemporary terms with the complexity of life's enigmas. The thread, according to Nietzsche, was a necessity in life, enabling a path through the confusion of certain crises in life. Ariadne is portrayed as a statue in de Chirico's paintings, based on the famous marble masterpiece in the Vatican.

Painted first during de Chirico's early years in Paris, when he was intensely lonely, Ariadne became a symbol of exile and loss. The works resonate with the loneliness of the dispossessed; they were influential on Salvador Dali, Max Ernst and René Magritte. In the wider context of Surrealism they were very important works.

Giorgio de Chirico and the Myth of Ariadne, brings together key works (18 paintings) from the Ariadne series from private and public collections around the world, as well as related drawings and sculptures. This is the only European venue for this important exhibition organised by the Philadelphia Museum of Art. The exhibition confronts the contentious issue in de Chirico's career, where, having painted the myth of Ariadne in 1912-13 he then returned to it later in his life and produced what were virtually copies of the earlier works. Referring to the intense creative insight experienced on an early trip to Versailles, de Chirico wrote:

The curator of this exhibition, Michael Taylor, Associate Curator of Modern and Contemporary Art at Philadelphia Museum of Art states:

Press reactions to the show in London belong to the ongoing debate as to the value and authenticity of response of de Chirico's late Piazza d'Italia paintings, whether or not they were a form of self-plagiarism. In The Man Who Faked Himself, Rachel Campbell- Johnston (The Times, 22 January 2003) wrote:

Of the late work she continues,

Martin Gayford (The Sunday Telegraph, 26 January 2003) concludes that where the early work was poetically inspired the work produced between 1950 and his death in 1978 (some dated decades earlier than they were painted), "look like student copies, and give the impression that the poetic obsessive of 1912 had metamorphosed into a cantankerous, talentless old nutter". Charles Darwent (Independent on Sunday, 26 January, 2003) is a little kinder than Gayford, 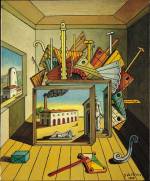 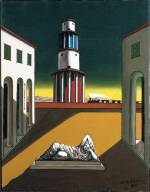