The Universal Addressability of Dumb Things

The Universal Addressability of Dumb Things

In recent years, there has been an increasing trend for artists to take on the role of curator, encouraged by a number of high-profile exhibitions, such as Grayson Perry’s The Tomb of the Unknown Craftsman at the British Museum (2012) and Hayward Touring’s series of artist-curated shows, including successes by Michael Craig-Martin, Richard Wentworth, Susan Hiller, Tacita Dean, Mark Wallinger and now 2008 Turner prize-winner Mark Leckey (born 1964).

The idea of such exhibitions, according to Hayward Touring, is to open up new and unexpected approaches to exhibition-making, as well as to give special insights into the artists’ own deeper preoccupations. In the case of Leckey, the visitor is treated to a spectacular cabinet of curiosities, ranging across the categories of human, animal, and technology, exploring a mind that is as much scientist as it is artist, as much crazy inventor as it is mad professor.

The exhibition’s title, The Universal Addressability of Dumb Things, comes from a concept in computing that refers to a network of everyday objects, all communicating with one another, and Leckey’s main precept for the show is his belief that the further technology evolves, the more our minds devolve back to the imaginings of our superstitious past. What, he ponders, differentiates our present, in which fridges talk to us, phones give us directions and websites predict what we want, from our ancient past, when stones were imbued with magical qualities and animals and plants carried mystical associations?

“I think of this show as a work of fiction,” Leckey explains. “A non-realist, anti-realist, magic-realist, speculative, slipstream fiction, a sort of sci-fi show. An inflation or amplification of the way the world appears to me now, a shape of ‘things’ to come … Call it an animistic future or techno-atavism. The Universal Addressability of Dumb Things is a world beyond tomorrow when every ordinary, unthinking object – tinned meat, refrigerators, paving stones – becomes an active participant in the Great Connection.”

As such, the exhibition places alongside one another such curious objects as a Hapi canopic jar (c664-332BC), shaped like a baboon and once used to preserve a set of human lungs; Jonathan Monk’s stainless steel Deflated Sculpture V (2009); and a boli from Mali (date unknown), which is an odd, dark, cracked zoomorphic shape, made, according to tradition, from the undigested contents of a human stomach: bones, vegetable matter, honey, alcohol, porridge and chicken blood, all packed together with clay and mud.

Also in this “animal” room, there is an homage to the cat. The totemic creature is shown, in Elad Lassry’s print Devon Rex (2011), against a green-screen background: a place of potential, where anything might happen. Godhead or devil, he also appears in mummified form (c332-30BC, Ptolemaic period), as well as being represented by a large tin of Felix cat food (2013).

The green-screen of open potential is carried over into the “human” section as well, where it offers the backdrop for a space filled by anatomical curiosities, ranging from Jim Shaw’s Dream Object (Digestive Tract) (2007), set against David Musgrave’s Animal (1998), a bisected model of Snoopy, showing his internal workings in much the same manner; to Stéphanie Rollin & The Plug’s Uterus Vase (2003) and Herman Makkink’s Rocking Machine (1969-70), a large white phallus, positioned like the base of a child’s rocking horse. In the corner, Robert Gober’s Man Coming Out of the Woman (1993-94) scarily gives birth to a realistically hairy grown-man’s leg, while, in a small Perspex case right under the visitor’s nose, the remnants of Christ’s circumcision are preserved for posterity in The Holy Prepuce (2013).

This juxtaposition of ancient and modern continues with a 13th-century hand reliquary displayed next to Touch Bionic’s state of the art i-Limb Ultra (2012), and three faces uncannily producing a cacophony of strange noises, mixing those of an animal with the low moan of a human, with a singing stone gargoyle (1200) on the left, a replica of William Blake’s death mask in the centre, and a Cyberman helmet (1985) completing the triad.

Upstairs, the visitor is transported back to prehistoric times, with cave drawings and the Cerne Abbas giant projected on to the walls of an otherwise darkened room, full of eerie noises and shooting-star-like lights. The curious twisted figure of a mandrake root (1501-1700) looks oddly at home near to Louise Bourgeois’ equally contorted NATURE STUDY (1984) [2001], a headless pink hybrid animal-human, male-female form. Brian Bess’s Beadman (Parker) (2012) lollops about like a creature made from jumping jelly beans, while an x-ray of a sculpture of Saint John of the Cross (1675) by Francisco Antonio Ruiz Gijón looks hauntingly like the print of a ghost, capturing the spectral vision of a spirit.

The “technology” section is furnished with everything from Miroslav Tichy’s handmade camera from the 1960s, through a Wurlitzer sideman drum machine (1959-65), a solar panel, a set of organ pipes, Richard Hamilton’s early Diab DS-101 Computer (1985-89), to Leckey’s own contribution to the eclectic menagerie, in the form of  “a big surrogate voice box”, aka Soundsystem (2013). In the farthest room, a Nissan Design Centre clay concept car (2012) (looking like a large melting chocolate confection) stands next to the blue crystal magnificence that is Roger Hiorns’ Nunhead (2004), a copper sulphate-coated engine.

But Leckey is not even content to stop in the present day. His zeal extends far into the future too, with a room of short videos and animations incorporating computer-generated avatars and the populace of times to come. This is an exhibition about the wonders of creation and existence, by and of both God and man. It is a freak show, yet all somehow disturbingly real. No stone is left unturned as he catalogues religions and spirituality from all corners of the globe, cave paintings to TV screens, moaning gargoyles to hip-hop soundtracks, the basics of animalistic sexual drive to advanced studies in anatomy and engineering. By looking at beliefs and traditions, science and technology, and the co-existence of the real and the virtual, Leckey considers the state of humanity past, present, and future.

As the writer Erik Davis notes, the rise of curation – gathering, filtering, selecting, framing and juxtaposing – as a self-conscious cultural and political practice might be seen as a response to informational complexity and data overload of the world today. With this particular act of curation, Leckey has produced an intriguing and idiosyncratic collection where nothing – yet somehow everything – belongs.1 The Universal Addressability of Dumb Things brings together inanimate objects from across the centuries and invites them to converse with one another, drawing out interrelationships, some expected, some unforeseen. In his role as curator, the artist here has but set the green-screen scene, allowing for his subjects to interact freely and create an artwork and archive into which the visitor can’t help but be drawn. 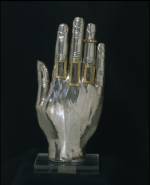 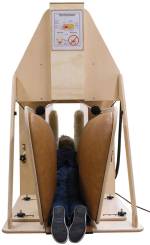 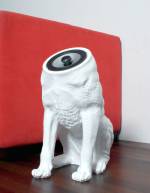