On industrializ­ation and machinery in The Red Desert; on 'Ecogame' designed as a continuous interactive game-like situation; and on Support Languages/Art Language.

ANTONIONI AND INDUSTRIALIZATION
It was interesting to see again Antonioni's film The Red Desert (now some six years old) just after the Hayward kinetics exhibition. This is not Antonioni's best-integrated film but it contains some powerful images of industrializ­ation and machinery: the grey factory chimneys smoking white or a sulphurous yellow, and the robot toy which batters itself against the wall of the little boy's bedroom.

Antonioni's aesthetic fascination with tech­nology is evident from this film : the shots of the huge radio-telescope at Bologna can only be described as romantic. But the poisoning of nature is more strongly stressed. It is hard to forget the image of the factory complex where (we are told) no birds fly, as they know the sulphurous fumes are lethal to them; or of the heroine (Monica Vitti) munching at a sandwich she has just hysterically bought from a workman, amid scrap and detritus—she in the most elegant Parisian dress, some of the factory workers in protective clothing; or the shack beside a polluted river, where the executives and their women come for obscure weekend recreation; or the greyed fruit and vegetables sold on a barrow; or the arrival of a ship in the fog flying a quarantine flag.

The poisoning of nature, and the physical experience of this, are paralleled by the poisoning of family and sexual relations. Despite the dullness of the script and of the character played by Richard Harris, this film will surely keep a classical status. As a French critic wrote, ‘...ce que surtout Antonioni met en question, c'est l'habitabilité même du monde.' (Maurice Pons, Les Temps Moderns, December 1964).

ECOGAME
The Computer 70 exhibition at Olympia in October was not the first trade exhibition to have included an art contribution as the centrepiece. The idea seems a good one, and could become a traditional medium of pat­ronage. Such occasions involve the exchange of large sums of money, so that the costs of financing the art contribution (whatever it may be) can be absorbed. The bulk of such exhibitions can be very tedious, and they provide an opportunity to interest intelligent people who may for various reasons profess little care for artistic matters. Commissioning by the organizers of a trade exhibition has some advantages over commissioning by an individual firm, which is usually done through its public relations budget. (How, incidentally, can Olivetti seriously present in 1970 some­thing as pointlessly grandiose as their 'Concept and Form' exhibition, recently in Edinburgh and London?)

The organizers of Computer 70, the Business Equipment Trade Association, invited the Computer Arts Society to contribute a project, placing only two constraints on it. These were : '1) it should demonstrate one unusual, but potentially important, application of computing in a social context, and 2) it should do this in a pleasant, well-designed environment'. The environment was certainly OK—a small air-conditioned geodesic dome. The application was called 'Ecogame'. It was designed as a continuous interactive game-like situation. A number of players, seated at terminals con­nected to a time-shared computer, made decisions about the use of resources in a simple model of a socio-economic system. Any one player's use of resources affected all the other players in the game, so that competition and collaboration were possible.'

At the beginning of each decision interval, every player received a given amount of 'wealth' (indicated at his cathode-ray display terminal). A project was then presented to him, with four alternative action choices. His task was then to select a project which would provide enough of a return to keep him within the game, yet where social effects did not deplete the overall resource level. The social costs of a project affected the efficiency with which the investment value of the project chosen by him was converted into new re­sources.

The deviser and programmer was George Mallen, an associate of Gordon Pask, who is researching into simulated computer models of human learning. Mallen writes of the game :

In this system, the effects of players' decisions interact so that it becomes extremely difficult to predict system behaviour at any time. As in real life, success in the game is difficult to define. A player may adopt a socially (i.e. good for the overall resource level in the system) beneficial policy at personal cost or he may adopt a self resource grabbing policy for himself at great social cost.

Players were able to select one of a number of social contexts within which they made their decisions: for instance, industrial development, science and technology, and natural resources. The computer system was also programmed to control slide projectors showing sequences of slides to illustrate pictorially the state of the game. For instance, if the social context chosen is the natural environment, then as the resource level falls from high to low, a sequence of pictures is shown—starting with pictures of natural abundance and beauty, then pictures of urban development and congestion, and finally pictures of deserts, clogged cities, ruined valleys and so on.

The overall plan is undoubtedly brilliant. Unfortunately some technical problems were experienced, mainly due to overloading of the central computer; and on the occasions when I visited the Ecogame it was almost grinding to a standstill without ever actually doing so (systems men call this 'graceful degradation'). Another criticism is that the explanatory material was more rhetorical than factual. Great care should have been taken with the documentation of such a project—not merely because it is the only surviving record of a very expensive event, but also because we have all become alerted recently to the importance of the 'support languages' in which art is presented.

At the same exhibition, the Computer Arts Society showed its familiar collection of com­puter graphics, with some new work by Auro
Lecci and Waldemar Cordeiro.

SUPPORT LANGUAGES
Conceptual Art as a whole—if it is possible to regard as a whole the motley crew that sail under its elusive colours—I find extremely boring. However, I sympathize with the wish of artists to control the presentation of their work more closely. The following remarks by the Art-Language editors seem to me admirably clear (though their subsequent conclusions do not) :

Nonetheless, one can see a place for writers on art when one sees the terrible job that some visual artists make of presenting in words their own work. It is kind to them to give relatively little attention to their 'statements' and con­centrate on the medium that they are at home with.

This applies to the work of Malcolm Carder, who showed a large electronic piece at the Hayward kinetics show, and several smaller perspex and kinetic works at the ICA during October. Visually they are complex and elegant; but the introductory folder by Carder himself for the ICA show—about yin, yang and mandalas—serves only to mystify, and leaves one in doubt about the experience.
Art-Language Volume 1 number 2 contains a most original article by Michael Thompson, who is not a conceptual artist but a social an­thropologist. He has also written for New Society3 about his theories on rubbish and human culture. Briefly, his argument is that there are three categories of object communicated between people in our society: Transients, Rubbish and Durables. Good Art comes into the category of durables; Bad Art into the category of rubbish, but rubbish can be reclaimed into the durable category at any time (as, for instance, when there is a sudden craze for Victoriana or art deco). I find Thompson's application of anthropological techniques (derived from Rodney Needham, Mary Douglas and others) to the study of art most interesting, though his specific espousal of conceptual art is questionable. Since I understand he is currently revising his arguments for a book on Rubbish Theory, I shall not take up this point at the present time.

1 Hardware notes. Ecogame was run in the PDP 10-based time-sharing system operated by Time Sharing Ltd. Interface between the players and the computer was by Tektronix T4002 Video Display Units. Input decisions by players were made by means of joysticks controlling the position of cross-wires in the screens. Programming was in the TELCOMP 3 language. A second system (an Idiom Graphic Display) controlled the slide pro­jectors and displayed information about the game state at any time.
2 Art-Language, Vol. 1 no. 1, May 1969, Introduction.
3 Michael Thompson, 'Conceptual Art: Category and Action', Art-Language, Vol. 1 no. 2, February 1970; 'An Anatomy of Rubbish: from junk to antique', New Society, 10 April 1969; 'The Death of Rubbish', New Society, 28 May 1970. 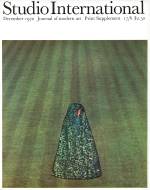 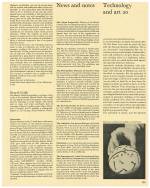 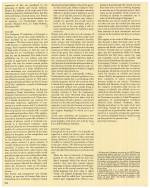