The 20 prints in this show are a product of pure chance, says Fabrizio Poltronieri, who as both artist and programmer, positions himself in the tradition of truthful and direct computational experimentation between man, code and computer

Within the idiosyncratic and technically savvy world of what is known as computer art, there is often a tendency to fetishise its medium as the harbinger of a new dawn. Inspiring both utopian and dystopian narratives, the computational apparatus, it seems, lures people into thinking of it as a tool, a magical abacus that can, for the initiated, formulate the kind of dreams and nightmares that only scientists and programmers can fully comprehend. Occasionally, however, these antithetical readings disappear. When that is the case, we find something new in the playground of computer art. Fabrizio Poltronieri’s Teogonías (Theogonies), on display at the Oi Futuro Ipanema in Rio de Janeiro and curated by Alberto Saraiva, is one such example.

Born in 1976, Poltronieri has the kind of background one might expect of a computer artist of the 1960s. He initially studied mathematics before joining a graphic design school and, as he became aware of the computer’s aesthetic capabilities, his career moved away from commercial application towards pure aesthetical experimentation, both practical and philosophical. Also, similarly to previous computer artists, he has been highly active in both the arts and academia and, in fact, his philosophical work is what usually drives his artistic practice. Chance, or the ontology of chance, is recurrent in his artworks. Being either with Teogonías or with his participations in the group he founded [+zero],  Peircean semiotics is central to his artistic practice. According to the artist: “[Charles Sanders] Pierce reminds us that science becomes exact only when it is dealt quantitatively. Since science is a web that aims to capture that which is general and not particular, chance, pure chance, is not the object of science. Chance or randomness is then the object of art, which also does not need a reason to be. That is the ontology of art and, consequentially, chance; it is potentiality and not definition.”

The prints exhibited here at Oi Futuro are not the product of some collaboration between artist and programmer. Poltronieri is both and, consequently, positions himself in the tradition of truthful and direct computational experimentation between man, code and computer. Written painstakingly in Ruby (a programming language), the prints shown are, according to the artist himself, “a true product of pure chance”. There are 20 prints in the show, all written in the same programming language. Put together, these have taken more than 60 hours to be resolved by the computer running the code. There is also a computer video installation, Zeus, and a 12-metre-long print, Hesíodo, which greets the visitor at the main entrance.

Teogonías itself, as the title of the show notes, evokes the narrative poem of written by the Greek poet Hesiod in around 700BC. In the work of Hesiod, the gods and the world are given an origin, a story: Cosmogony and Theogony, respectively. Hesiod’s narrative and prose, then, provides a structuring account of the state of the universe as seen by its Hellenic compatriots. It is a genealogy and a narrative of that same universal hierarchy but, also, an ontological account of the Beginning since, as one might expect, there is no such a thing as a causation in its beginning: things just are. The poet is then placed in a position that is paradoxically divine and profane. Poltronieri explains that: “Its power, embedded in its speech, narrates facts that are outside our mortal, chronological scope. Given directly by the muses, his speech attempts to describe the sublime experience of the sacred that should not and cannot be described. The poet hence possess the highest form of communication: the knowledge of the gods.”

The show is divided between two floors. On the first one, in a darkly lit room, we find the muses. It is a simple, symmetric and quiet location that reinforces the quasi-religious overtones of both the prints and their descriptions, taken directly from Theogony and fed into the Ruby program in order to generate each one of these muses. Above, on the second floor, are the gods themselves, this time positioned in a high-ceilinged room with the same symmetry but for one very telling distinction. Zeus, king and father of the gods and goddesses of Olympus, overlooks his subjects made flesh by prints, but, unlike them, he is not finished. Embodied by a matrix of four LCD screens, Zeus is constantly changing, in an infinite program that is constantly and slowly being recreated. Again, as always, the artist is powerless over this constant transformation.

The result of pure chance, such as the creation of all is no small matter. Fabrizio, with his Presentation of the Computational God, is not recasting or retelling the origins of the world or yet, as postmodernists used to say, creating a simulacrum of reality. This is not an act of representation but something ontologically different – of presenting, of creating a new existence. Hence, Poltronieri’s new god is really new, and not, as one might suspect, a revision of some old entity. Similarly to Hesiod, who use Hellenic culture to engender his Hellenic universe, Poltronieri’s code, embedded with chance as much as the Beginning itself, creates and does not recreate a world; it presents and does not represent anything. The very idea of representation, of mimesis, cannot be applied to his work. In fact these prints, philosophically and aesthetically, rethink the notion of representation by murdering it. How can one think about representation when something does not exist a priori?

In an artistic world full of new technological gimmicks, it is refreshing to find a pure new endeavour such as this. This is an exhibition that serves not only the senses but also the spirit, in that it provides not only a new way to think of the artistic processes of technologically oriented artists (if there is such a thing) but also the creative act itself. Chance is not part of a game in this process. Chance is the game. And Poltronieri, like other great artists of our troubled and beautiful new epoch, is not only ready to acknowledge the importance of this game, but is also prepared to let it be and to follow its own unpredictable course and not be tempted to control it. In a sense, like Hesiod, Poltronieri is also a poet for a new Pantheon: the computational one. 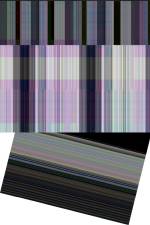