Beyond the Visible: The Art of Odilon Redon

Beyond the Visible: The Art of Odilon Redon

As part of a broad anti-materialistic and anti-rationalistic trend in art and ideas towards the end of the 19th century, Symbolist art also marked a rejection of the naturalistic aims of the Impressionists. The art of Odilon Redon can be linked to the poetry of Baudelaire and Edgar Allan Poe, and the music of Claude Debussy. In the same way that Symbolist poets believed that there was a close connection between the sound and rhythm of words and their meaning, artists such as Redon saw in colour and line the capacity to express ideas. The full range of Redon's masterly symbolism was shown at the recent exhibition at the Museum of Modern Art in New York (MoMA) of over 100 works from their collection. Based on the major gift from The Ian Woodner Family Collection, 'Beyond the Visible' reveals the cultural milieu of late 19th-century France, and the impact of Redon's remarkable work on subsequent artists. Dark visions and bizarre fantasies, charcoal works and lithographs, and life-enhancing flowers in pastel and paint reveal the range of Redon's extraordinary oeuvre.

Odilon Redon (1840-1916) sought to evoke a sense of mystery equivalent to that which he felt in the presence of nature. He wrote, 'I have placed there a little door opening on to the mysterious. I have made stories'. Redon believes that art cannot be analysed, and is not subject to systems. In a note of 1887, Redon lists three sources from which art can be created - tradition, the legacy of art, containing 'the entire thinking and moral life of humanity', reality or nature, 'outside of which our own ambition to create remains in a state of dream, of abstraction', and personal invention, 'the original intuition that combines and summarises everything, seeking support in the past and in the present in order to give to the contemporary world a new organisation'.

Odilon Redon was born in 1840, in Bordeaux, and lived there until 1870 when he moved to Paris. He had a reflective, solitary childhood, in which nature and dreams played an important part. He later expressed the view that society wanted to control natural phenomena, and in the process suppressed its dreams. Until his 50s, he worked almost entirely in black and white, in charcoal drawings and lithographs. It has been said that he chose charcoal and lithographic chalk as an alternative to what he perceived was the dull daylight colour of the real world. Graphic shadow was his defence against Impressionism, which he rejected. He later told a younger artist, Paul Serusier, 'I refused ... for I found its ceiling too low'.

As a young man, Redon made visionary charcoal drawings, which he named 'les noirs'. He acknowledged the role that any art material would play in the creative process: 'Products are agents that accompany [the artist], collaborate with him, and have their say in the fiction he is to furnish. Matter reveals secrets, it has its own genius; it is through matter that the oracle will speak'. 'Les noirs' cannot be compared to anything else in art, although the series of satirical fantasies drawn and published when Redon was a child in the 1840s, by Jean Ignace Isidore Grandville, appear to be connected. However, the 'noirs' were not amusing, nor were they illustrations. They did not tell a continuous story either. Redon made a series of lithographs for Flaubert's The Temptation of St Anthony. In these early drawings, he developed an easily recognisable repertoire of menacing subjects; these included odd amoeboid creatures, and insects and plants with human heads. Furthermore, there seem to be numerous pictures of severed heads ('Head of St John the Baptist') and it is also evident that he had a fascination in death ('Through the crack in the wall, the head of death was projected'). In her catalogue essay, The Secret Life of Monsters, Marina van Zuylen discusses Redon's place in art, somewhere 'between the rational and the irrational, norm and deviation, bringing to the public the wonders of the hybrid and the grotesque'.1 In the tradition of Hieronymus Bosch (c.1460-1516), Pieter Brueghel (c.1525-69), Matthias Grünewald (c.1480-1528) and Francisco Goya (1746-1828), Redon produced remarkable and bizarre images of monsters and dreamlike fantasies. 'His monsters unwittingly came to symbolise the staunchly idiosyncratic trajectory: art, like the monster itself, would prove us wrong in our will to distinguish between human and non-human, ugly and beautiful. Redon's monsters, like Poe's psychopaths and ETA Hoffmann's doppelgängers, suggested a new and disturbing way of viewing self and world. Familiar and unfamiliar, attractive and repellent, they became lenses through which to examine a different, infinitely complicated 19th century'.2

The artist was able to create astounding variations through his choices of charcoal, from the warmer-toned oiled type that adheres more easily to paper, to the newly available manufactured version that came in a range of colours, and degrees of hardness and compression. Redon was also able to multiply charcoal's effects in the way he chose to use it, from bearing down on the sheet with the stick's point, to turning it on its side, from wiping the powdery medium across the paper with his hand or a rag, to using a stump to pond the crystals down. To vary the black's texture, tonal values and hue even further, Redon added black chalk primarily as an outlining device, and black pastel to intensify velvety surface effects.3

Redon could not bear a blank piece of paper. He had to apply line and mass to it. Of black he wrote: 'Black is the most essential colour ... [it] should be respected. Nothing prostitutes it. It does not please the eye and does not awaken sensuality. It is the agent of the spirit much more than the splendid colour of the palette or of the prism'.4 Redon himself interpreted his later adoption of colour as follows: 'In ceaselessly making myself more objective,' he wrote in 1913, 'I have since learned, with my eyes more fully open on all things, that the life that we can unfold can also reveal joy. If the art of an artist is the song of his life, a grave or sad melody, I must have sounded the note of gaiety in colour.' Of his 'noirs' he wrote, 'They were executed in hours of sadness, of pain and ... for this reason, are probably more expressive. Sadness, when it is without a cause, is perhaps a secret fervour, a sort of oration, something vaguely like worship, in the unknown ... The secret, vital ardour that gives birth to charcoals depends on good diet and rest ... It is exhausting later in old age when nourishment is less assimilated'.5

He was 60 years old when he abandoned the black and white of his graphic work and turned instead to oils and pastels. He began expressing himself in radiant colours, in visionary subjects, flower paintings and mythological scenes (The Chariot of Apollo was one of his favourite themes). In particular, his flower paintings were well received by Matisse. The Surrealists found Redon's work fascinating, as they, too, took their inspiration from dream imaginary and the subconscious. Furthermore, he had a number of young artists that admired his work greatly, which made a significant impact on Redon.

Natural perfection and ideal beauty were central to Redon's late painting and pastel works and butterflies. In 1903, Redon wrote that painting depended on, 'a gift of delicious sensuality, which can with a little of the most simple liquid substance reconstitute or amplify life, leave its imprint on a surface, from which will emerge a human presence, the supreme irradiation of the spirit'.

The exhibition at MoMA has made public works that were conceived privately in an idiosyncratic language, against the general climate of Impressionist painting in late 19th-century France. The catalogue that accompanied the exhibition is fully illustrated with excellent, scholarly essays. Central to Redon's private vision was a desire on his part to transmit his imagery to a wider audience, and he did so by making etchings and lithographs. They captured, of course, the essentially graphic qualities achieved by charcoal that he worked on at the same time, and they enabled him to work in editions, which were economically viable, and to illustrate ideas that were central to his literary form of Symbolist thought.

During his lifetime, he made some 30 etchings and 170 lithographs. The majority were produced in a 20-year period from 1878 to 1900. Working in printmaking is a valuable exercise in aesthetic terms, as one learns a great deal of the potential and limitations of the picture plane. The manipulation of the line and mass in etching and lithography informs all work in two dimensions. The catalogue essay by Starr Figura, Redon and the Lithographed Portfolio, gives an informed and detailed account of Redon's most important portfolio projects: Homage to Goya (1885), The Temptation of St Anthony (1896) and The Apocalypse of Saint John (1889). A study of these subjects represents the important phases of Redon's artistic development and the essential themes in his work. Although the late pastels and paintings are splendid expressions of Redon's discovery of colour and joy, a detailed study of the lithographs enables one to see the development and expression of one of the most fascinating and independent artists of the late 19th century. 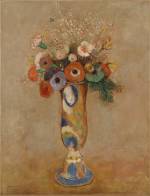 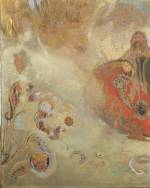 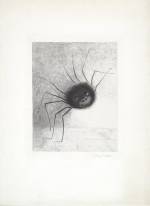 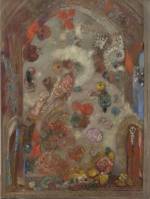 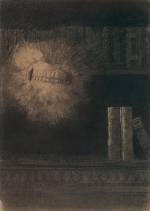 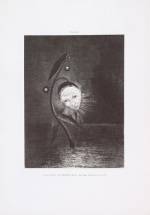 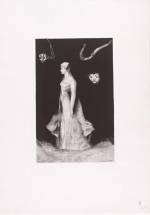 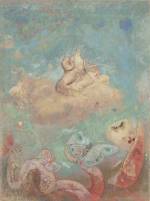 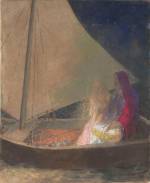 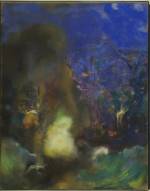 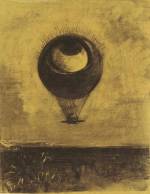 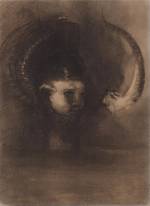