A treatise on the pneumatics of Hero of Alexandria illustrates the working of various mechanical automata: a whistling bird whose voice is generated from the pressure of air in the pipes underneath its pedestal, a flagon that emits a tone upon being filled with liquid, and a trumpeter who plays a string of notes, his body concealing an array of water-filled pipes.

In 1645 John Evelyn made a journey through Italy, stopping frequently to enjoy the beauty of the Italian gardens. In his diary entries, he describes in detail the features of these ornate gardens, in particular the waterfalls and the fountains and how they were positioned in the garden, and what effect on the senses, especially those of vision and audition, they seemed to produce. Around these water features were mechanical singing birds, roaring monsters and hydraulic organs, all of which were said to be powered by the force of the water.

As described later by Evelyn: the Italian garden had a certain beauty brought about through the unification of the senses. But one could also say that the Italian garden championed the aesthetics of efficacy. That the water organ played its melody by virtue of the flow of water directly through it can be seen as an essential part of the beauty of the garden. The aesthetics of efficacy could also be said to apply to those 17th and 18th century gardens which through their features, such as the firing of a canon near to a cliff, exemplify the qualities of the landscape by the capacity to produce an echo effect.

Efficacy has been a subject for many artists, some of who use traditional mechanical means, others use the medium of technology to realise their objective. Rafael Lozano-Hemmer is of the latter camp.

In an exhibition at the Haunch of Venison, Lozano-Hemmer explores the way the viewer is able to affect an art work through the use of electronic sensors and computerized surveillance systems. In Pulse Tank (2008) viewers are invited to place their hands, or their fingers, on sensors placed at five points around a shallow tank filled with water. The tank itself is illuminated in such a way as to produce a reflection on the ceiling. When a person makes contact with the sensors, a pump sets the water in the tank in motion, and this in turn creates reflected lines of moving light that coruscate across the ceiling. Moreover, the sensors with which the hands or fingers are in contact pick up that person's pulse, transforming it into a rhythm, a variable and unpredictable rhythm.

Pulse Tank is an embodiment of the sum total of causally related actions. And yet, each of these actions can be seen as an aesthetic element in its own right, so, for example, the rhythmic sound issuing from the mechanism of the water pump can be appreciated for its own sake, or, in relation to the wave motion of the water, or to the lines depicting the pulse rate that are projected on a section of the wall.

With 'Reporters With Borders' (2008) the viewers' participation in the piece can be seen as more of a two-way interface. The piece, consisting of an entire wall of video footage sectioned into squares and containing news reporters and politicians, is brought into life by the presence of the viewer or viewers. One can by the sweeping arch of an arm bring about the animation of a section in a manner that resembles the sweep of an arm. If one stands at a particular distance from the piece one can similarly activate a figure-like section, so that each person represented within the designated area starts to move, to speak, and to gesticulate. What is heard are not individual words or strings of meaningful sentences but a cacophony resembling the sonic texture created by a flock of migrating birds. Without the presence of viewer the piece falls silent, the only movement seen is by suggestion: that the action of the individuals depicted becomes frozen, their faces shaped in readiness for the next syllable.

Feedback is an integral element to Lozano-Hemmer's work, and it is exemplified particularly in Microphone (2008) and Alpha Blend, Shadow Box 7 (2008). The former work consists of a lone vintage microphone standing in the midst of a circular spotlight. Only when a viewer speaks into it does the system 'respond' by first throwing back the sentence uttered, and then reflecting some other utterance, an utterance made earlier in the day or the week by some other person, so that the present participant appears to be engaged in a strange and disjointed communication.

In the case of Alpha Blend, Shadow Box 7 (2008), the idea of feedback is a way of conflating past and present moments. A screen sectioned into four components and depicting, through its in-built surveillance camera, a part of the gallery space, is able to display persons that come within its camera range, as well as persons that have, at some point, passed through the space. And the image on the screen is such that it can place two or more moments in time together in a seamless way. One may inhabit the space alongside others who have inhabited the space, but who appear to be inhabiting the space alongside the image of yourself. Moreover, one's image may inhabit a space with an image of oneself at a former time. The only difference between present and past is that images rendered as present are animated, whereas those of the past are rendered as still moments. If the present images are discernible through motion, it is the capacity for motion that appears to make these images almost translucent: persons moving through the space will seem to melt into the furniture of the room, as if they are mere ghosts.

Lozano-Hemmer has created subtle interplays between present and past, viewer and art-work in ways that seem to go beyond the technology itself. 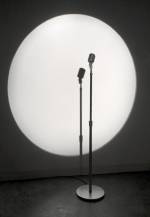 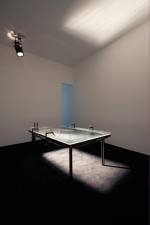