Blurring the line between reality and fiction, performance artist Tsuneko Taniuchi tries to change our preconceptions of society through “Micro-Events” that include her dressing as a homeless bag lady and taking part in mass weddings

Japanese-born artist Tsuneko Taniuchi’s solo exhibition at Le Forum in Ginza Maison Hermès, Tokyo holds a mirror up to our norm by muddling reality and fiction.

Performance is central to the art of Taniuchi, who since 1987 has lived and worked in Paris. The artist herself becomes the medium. In Le Forum, clothes, a punchbag, boxing gloves, platform shoes and so on are laid out on the stage. Each afternoon during the exhibition, Taniuchi appears in the gallery for two hours. She arrives in her ordinary clothes and then begins to change her outfit and makeup. Visitors watch as she transforms herself into one of six female characters from contemporary society: a waitress, a gymnast, a female boxer, a homeless woman, a ganguro girl (a Japanese fashion trend from the late 1990s, in which girls sport a dark tan and wear contrasting makeup), or a ninja girl. One day, Taniuchi will be a gymnast doing radio calisthenics in her gym outfit. Another, she will be a female boxer furiously punching her sandbag.

These performances, which Taniuchi calls “Micro-Events”, make up a series of art expressions that she has been developing in various countries since 1995. They refer to the personal everyday occurrences that shape people’s lives, in contrast to macro-events such as international conflict or famine that affect society as a whole. “Living in Paris since 1987, I could not avoid facing issues such as ethnicity, racism or gender, individuality. I felt the divide between my common sense and how society frames gender, or certain occupations. It was imperative for me to somehow address these social issues as an individual living in Paris. While I thought of the most appropriate form to incorporate these issues, the most direct way is to use myself as a medium,” Taniuchi explains.

As she proceeds with her act for Micro-Event n°45: Six Female Characters + A Woman / Seven Days, becoming the bag lady, the female boxer and the other recognisable female figures, we are reminded of our familiar preconceptions of these characters. But the artist cynically defies expectations and forces us to move away from our fundamental notions of how these female personae are regarded in our society. “My performance connects reality – it becomes a form of expression by my participation, as well as the group’s, and the fiction – which is developed from the scenario and its staging.”

Her performances, which traverse the space between notion and values, display a vividly critical spirit and subtly disrupt familiar realities, enabling us to discover something that usually escapes our awareness. She plays with the relationship between the artist and the audience. “My performance only exists with the participation of the audience,” Taniuchi explains. While the audience watch her do her radio calisthenics, she will start to watch one of them as if she is trying to communicate with the audience. At this point, the audience are no longer an audience but become part of the act. One student watching the performance said: “I became confused [about] whether to respond to her performance as well, or [was] I simply supposed to watch? This sort of confusion will not happen when looking at painting or sculpture.”

In Micro-Events n°46: Weddings in Tokyo, which took place on 3 August, Taniuchi considered the relationship between people with different religious backgrounds, or different sexualities. Through the website of Hermès, she called for people who wanted to marry her. The Micro-Events seemed in no way different from authentic weddings. The marriage vows were made in front of a priest and the marriage certificates were signed. This is the artist’s statement about what marriage means in her adopted country, France, where the Pacte civil de solidarité (a contractual form of civil union between two people of the same or opposite sex) has been in force since 1999.

“Marriage shouldn’t be about possession. It doesn’t have to be between two people either,” says Taniuchi. Once you feel you possess or have control over your partner, jealousy and agony will arise. If you accept marriage as an accord, a commitment between people who care about each other, relationships between couples will be much easier and peaceful. In Ginza, Tokyo, Taniuchi took part in 18 ceremonies. There were couples from China and a man from Scotland. There were people from different religious backgrounds. One engaged couple, Shinobu Tanaka and Juri Shimizu, were due to marry next autumn but decided not to hold a wedding of their own and instead to have one with Taniuchi. Four young men married Taniuchi in a group. One of them said: “The four of us work together. I decided to get married on this occasion so as to show a clear line that I am taking charge of three other mates’ lives. But the others may have taken this wedding differently. Each of us will have different thoughts on the wedding.”

Just like any other weddings, these were full of joy. The difference was that most of the people who gathered to get married and their attendants were strangers to one another. Even though they didn’t know anyone who was getting married, the audience were joyous and the mood was festive. The event was a medium that allowed those getting married, as well as the audience who attended the ceremonies, to rethink human relations and the meaning of happiness. What in normal life would have raised eyebrows, taken through the filter of art, allows people to be tolerant. That is where the magic of art lies. 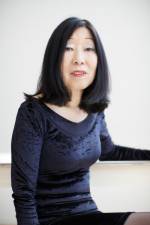 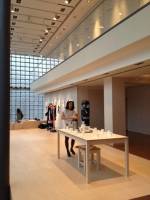 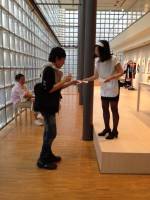 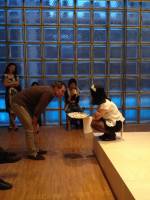 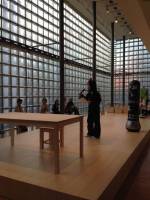 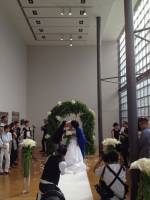