During the course of his expedition to the North Pole, Fridtjof Nansen, in his journal, describes the features of the arctic icescape. The last stages of this epic journey are undergone on foot, and in conditions that contrived to thwart his progress. Like many of his predecessors, Martin Frobisher in particular, his writings are often taken up with detail of the various sounds that ice and snow produce.

During the course of his expedition to the North Pole, Fridtjof Nansen, in his journal, describes the features of the arctic icescape. The last stages of this epic journey are undergone on foot, and in conditions that contrived to thwart his progress. Like many of his predecessors, Martin Frobisher in particular, his writings are often taken up with detail of the various sounds that ice and snow produce.

His sensitivity to these types of sound is made all the more poignant in one passage, when blinded by a snow blizzard, he describes the small and delicate janglings created by a thin ice encrusting his clothes as his only sense of self. Other passages focus on the visual displays before him: of snow and ice and the blanket of grey sky overhead. If not blinded by the snow-storms, his travels were made difficult by the lack of any observable features by which he might chart his progression: “…one is apt to run into the largest ridges or snow-drifts without seeing them; everything is equally white under its covering of new snow, and the light comes from all directions, so that it throw no shadows.” (Nansen: 1999, 306)

For Nansen, light and reflected light conjoined, the glare off the snow hills and ridges, of the things that distinguished one portion of landscape from another, were obliterated. He simply failed to see them; although one could say that those features of the landscape may well have appeared in some manner or other to him. And yet, he failed to observe the hills and valleys, the ridges and clefts, because the manner in which he perceived excluded that which cast these features in relief. Or perhaps his field of vision was taken up with an expanse of light, through which he was unable to pass; and hence, his perceptions were those of light and light alone.

Questions of whether one perceives light, or the object generating light, or whether light is just that, which illuminates, are partly why the current exhibition at the Hayward Gallery, The Light Show, is so fascinating. This exhibition brings a number of artists together who have produced works whose visual output is primarily light and/or shadows. I say primarily because the works are not free-floating light spectacles, although some have the appearance of being so. For some of the work at least, the supporting structure to which the light-generator is fixed is as much a feature of the work as the light itself. The glass filament columns (entitled Superstructure (2010) by Cerith Wyn Evans) stretching up to the ceiling, three in total, each of which has its own rate of change, from unlit to fully lit, from the appearance of being columns of delicate tubing, each containing its own electrical filament, to that of heat-emitting orange illuminated columns is one such example.

In the case of Leo Villareal’s work Cylinder II (2012), it is the cascading droplets of LED light which dominate the viewer’s vision: one experiences the light as a shower of phosphenes, as a light array severed from its source. Central to both Ann Veronica Janssens’ and Anthony McCall’s pieces is the way the projected light is directed; and the making of the work through the beams and intersections of projected light. The viewers’ position in relation to the light-source, in Janssens’ work, determines what structural properties are seen, since the viewer’s position determines whether he sees the shape of a star protruding from the surface of the wall behind or an array of entangled light-beams. With McCall’s work, the light beam gradually changes as it draws out elemental shapes on the opposite wall; and if one stands within the light beam, one experiences its gradual change as alterations in light surfaces, constituted by the fine swirl of mist and the reflective properties of dust particles.

Exploded View (Commuters) (2011) by Jim Campbell also involves the viewer being in particular positions in relation to the work; it consists of a multitude of blinking LED lights of various sizes, which can be viewed as such, without any apparent organisation, or as a hazy image in which the silhouettes of persons can be observed moving, in both directions, across the picture plane. This visual ambiguity between moving image and flashing light is at the heart of Olafur Eliasson’s work, Model for a Timeless Garden (2011). The work itself, contained within a darkened room, is a row of 27 fountains, each of which produces different shapes, from the thin jets of water creating arcs and towers, to the ones that produce skins of water creating delicate translucent objects, illuminated by strobe lighting. The effect of the light on the piece is to temporarily still the water’s movement and in doing so allow the viewer to experience a detail, a certain sculptural form, a perfect ring of droplets for example, which would not be possible under a constant light.

There are works in the exhibition that are themselves an environment; that immerse the viewer in colour, in coloured spaces, as is the case of Carlos Cruz-Diez’s Chromosaturation (1965-2013); and there are works, such as Untitled (1969) by Doug Wheeler that use diffused light and curved frames in order to create works that seemingly lack edges. And there is another category of work, which requires the viewer to attend to the way an object casts its shadow, or how two light sources, in counterpoint, produce alternate patterns of shadow and light, such as Nancy Holt’s Holes of Light (1973). Or how a shadow of intersecting lines across a room forms the dominant part of the work, rather than its physical components. All in all, this exhibition is both spectacle and sensational. 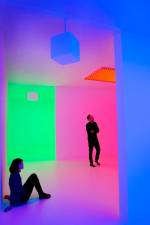 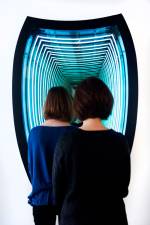