United Visual Artists (UVA) was formed in 2003 by Matthew Clark, Chris Bird and Ash Nehru. Since then, the practice has expanded and currently numbers 12. With team members coming from various disciplines, including visual arts, architecture, engineering, production and software programming, this is a collaboration that pushes the boundaries of contemporary art, producing works that incorporate sculpture, installation, live performance, digital art and architecture 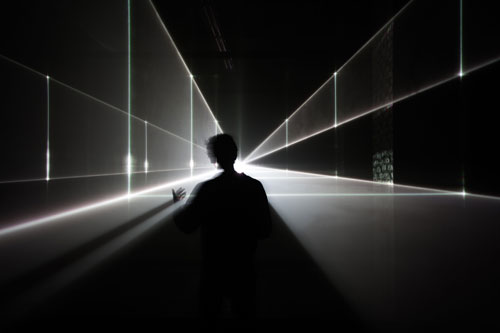 Working as a collective allows ideas to be challenged and developed throughout their creation. What all members share is a fascination with the physical presence of light and a desire to capture this ephemeral presence to create transient structures. “It’s the flexibility that light offers, especially in the context of digital control, that makes it so attractive. No other material is so easily and utterly controllable, while having such an enormous impact on a space, or surface.”1 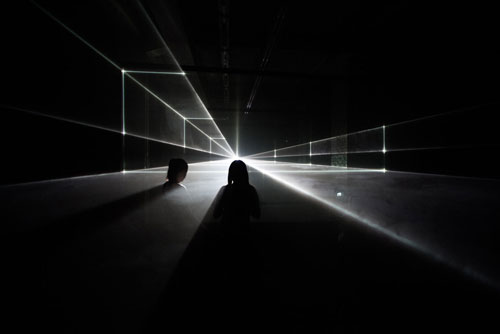 Their current exhibition at Towner derives from an interest in the sketches of Leon Battista Alberti (1404-1472), Leonardo da Vinci (1452-1519) and Albrecht Dürer (1471-1528), each a master of perspective in his own right. Sending lines and shafts of light, seemingly far into space, from an arbitrary vanishing point, UVA uses perspective as both a tool and a visual outcome. The light draws boxes, creates rooms within rooms, turns otherwise flat and smoky darkness into voluminous space within which worlds collide, paths diverge, walls are built and broken down.

Vanishing Point, which premiered last summer at the Olympus OM-D Photography Playground in Berlin, has been reconstructed especially for Towner, a venue that drew the artists for its architectural qualities. The latest digital, laser and light technologies – UVA uses white laser diodes (RGB) and a Pangolin system – create a truly immersive experience, similar to Anthony McCall’s light drawings, but somehow more 3D. Blades of light bisect the space, alternately horizontal and vertical, creating planes that draw you in like railway tracks to the vanishing point on the horizon – seemingly far away, but defying logic, since your head knows the room is only relatively large. Frames, or windows, recalling the work of Alberti, pull you in to the pictorial space. You become both subject and object, an integral part of the work, with each movement adding to the overall effect and questioning the relationship between passive spectatorship and active participation. “Our use of perspective is in essence a pure comment on – or interpretation of – Alberti’s window, where through projection planes this pictorial space intersects with the real space. The perspective we draw is an artificial one, with lines converging at the laser device.”2

Grappling to accustom yourself to the dark, and then being momentarily blinded as the swinging ray falls directly on you; transfixed, unable to move, yet minutes later feeling called on to dance, to reach for the distance, as if chasing the end of a rainbow; standing and staring, bewitched, allowing the light to itself dance on you, a surface, or canvas, as much as any other. 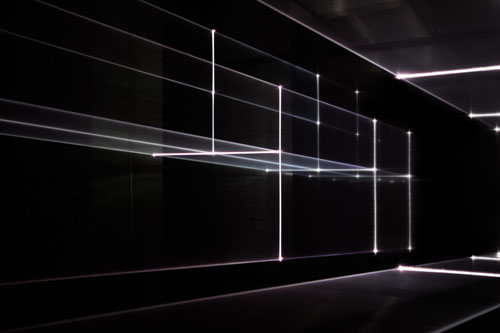 Questioning our relationship with modern technology, UVA distils it to its essence, creating something pure, timeless, stellar. “It was interesting how the different lasers we experimented with required different drawing techniques,” the artists explain. “Depending on the quality of the laser, the effort required to trick it into drawing evenly lit, straight planes can be quite considerable. Though at the same time, part of the fun is to play with the medium, and adjust the animation of the programming to work with it – not against it.”3

UVA is concurrently showing at the Curve Gallery in London’s Barbican, but Towner, with fewer people tramping through, offers a more suitable venue, one in which you can truly stand and meditate, breathe in the sweet smell of stage smoke, listen to the sound of the mechanics sampled directly and in real time from the laser via a contact microphone, be swept away in a dream, surf on the moonbeams, spiral into the vortex and enter the frame.

Drawing on their studies in programmable architecture, there is further material on display outside this installation, also part of the exhibition. Drawings and prints that elucidate UVA’s planning stages, and a film that, although interesting, cannot hold a candle to the central light installation – a veritable pièce de résistance.