Between Embodiment and Identity

Between Embodiment and Identity

King’s College has purchased the East Wing of Somerset House – a row of Georgian buildings next to the Temple hidden behind the College’s street front. While photographs of eminent alumni (from Thomas Hardy to Desmond Tutu) cover the Strand facade, circular plaques celebrate associates along the East Wing (Sir Edward Victor Appleton, Nobel Laureate 1924, ionospheric radio). King’s department of Law is housed in the East Wing and among the seminar rooms and offices are the Inigo Rooms. Opened in January this year (2012) Between Embodiment and Identity is the second exhibition in this new space.

Beginning with a large glass display case, diagrams and drawings of body parts alongside plastic replicas of the same introduce us to the overlap of art and science. While Joseph Beuys might arrange rows of fat and felt referencing his “history” of plane crash and rescue – a doctor’s surgery would likely display body-part models as visual aids to explain a physical condition. The first may be enticing us to participate in his story through found or constructed objects; the second might be following a series of sequential narratives within a Victorian aesthetic. And while an artwork may or may not chime with societies consciousness, and a medical procedure might only be judged in hindsight, the fact that both science and art are concerned with the stuff of mystery is clearly evidenced in this exhibition.

Interesting then that this work is showing in a department whose discipline is more inclined towards proven evidence. Medicine has travelled a rough and terrifying journey through the centuries. A testimony to an early investigation into anatomy is the exhibition Leonardo Da Vinci: Anatomist – Inside his mind, inside the body, currently on show at The Queen’s Gallery, Buckingham Palace. One particular terror in this medical landscape lies in the gap between the patients experience and the doctors understanding of that experience. Too much empathy might disable a response, too little could result in false diagnosis.

In her film Out of Body (2009) Susan Aldworth goes far towards bridging this gap. Remembering her own brain procedure (treatment for an embolism), Aldworth recalls that she seemed to float to the ceiling and watch the doctors working on her: “I was completely at peace”. Aldworth also had the presence of mind(extraordinary considering the circumstances) to examine her condition. “I realised I was without pain… I was hearing with an echo… and I felt as if I was in a tunnel.”

This information may impact on the actual procedures of brain surgery but more important is the fact that all frontline reports are valuable in weaving substance into spaces of ignorance. Aldworth describes her experience while scans of the brain, drawings and photographs of childhood float through the frame, life fleeting past – music, song and dancing. Is this grasping at screen memories what it is like to think you are dying? We are told that when drowning people recall their lives in a flash, yet today so many of our memories are constructed through photographs and movies that it is difficult to be sure whether any memory is really our own.

Dr Richard Wingate in his catalogue text for this exhibition outlines the development of imagery in biomedical research: “…Technological interventions … have altered the material stuff of biomedicine and human anatomy, from the slab of dissected material and collection of glass slides, to a three dimensional, digital theatre of the spectacular….”

That medical and artistic images have been affected by our technological revolution concerns not only the aesthetics of the imagery but significantly the places we can now see into. “…visualisation techniques … have harnessed optical physics to give a dramatic window into living cells and the functioning system….” In the light of these changesWingate asks: “… what effect does the mechanics and aesthetic of visualisation have on our sense of our own biology?” Influenced by our technological and image-filled environment we are, in general, familiar with visualisations of the surface of ourselves, and while a visualisation of the inside of our own body would, I propose, fascinate the viewer, it must be said that the process of watching a screen – there being no tactile connection – carries with it a dislocation from the physical body, echoing Aldworth’s sense of floating and looking down at herself.

While Windgate asks how visualisation influences our sense of our biology, the broadcaster Dr Aleks Krotoski in her programme The Digital Human is also concerned with how technology impacts upon us. “…We live within it [the digital world] every day. The question really is who are we now because of it?”1

In this multi-dimensional collective society embedded with ever expanding methods of visualisation we might also ask whose memory is it we are sharing? The how, what and where we see,must influence a reassessment of ourselves. Perhaps this touches on Aldworth’s concept behind her series of lithographs, Reassembling the Self (made in collaboration with Stanley Jones at the Curwen Studios), the large black and white images suggest Victorian medical diagrams and the macabre.

Hindsight narrative and extraordinary viewpoint feature large in Karen Ingham’s work Narrative Remains (2009). Made in collaboration with the Hunterian Museum Inghan brings life to specimens – cancerous body parts suspended in glass jars – how could I have guessed before I visited this exhibition that I would look through a Bishop's rectum from the inside point of view? While a voice (speaking the words of the Bishop's diary) bemoans his painful experience we examine the aforementioned piece of him, transfixed by the narrative and charmed by hindsight – this is The Big C2of the 1800s.

Andrew Carnie’s work Seized: Out of This World also features a floating – bodies layered one over the next emerge and disappear suspended on large screens, standing among the display is to almost share in the suspension.

This exhibition illustrates the value of science art relationships and leaves us hoping there will be more such engaging cross-disciplinary works to support us in our confused contemporary condition of sensing ourselves. 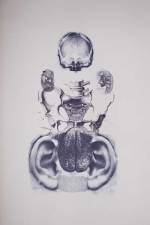 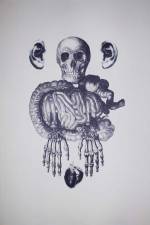