The Royal Scottish Academy (RSA) in Edinburgh has got in before the Royal Academy in London with its summer show. The RSA 2007 exhibition powerfully develops the 'Highlands and Islands' theme in contemporary art and sits well within global aspirations and directions.

The special but unwritten message of this exhibition is that the arts community and wider public must cherish more than the Highlands and Islands region of Scotland as a global priority, not just as a romantic appendage of North Britain, as the Victorian establishment renamed the region of Scotland itself. The narrative of this area has been subtly woven here across the several rooms or galleries of this Neo-classical building. Specially demarcated exhibits are dispersed throughout, as 'Highland'. The conceptual art, land art, and photographic assemblages make this point emphatically, more so than if this regional preoccupation was erected rhetorically. 'Highland' cleverly spreads throughout, identifiable visually by a pale change in wall colour. Large text panels help to maintain this sequence, which enhances but does not diminish the value of this more routine survey of just what the Scottish indigenous arts community gets into frame. 'A Window to the West' forms part of this seam: Will Maclean and Murdo Macdonald are closely aligned in this venture. The former shows a challenging but moving assemblage of closely-honed timber and metal elements. The latter also contributes to 'Selection from a Visual Notebook' and joins Will Maclean in 'Ribwright Rite' with Arthur Watson.

A large minority of the artists exhibited (several of whom are Gaelic speakers) emerge to formulate the basis of a new art narrative for the Highlands. Prehistoric carvings fulfil an important role. Artists like Calum Colvin, in his major work 'Ossian' (2002), which is composed of nine vertically disposed, identical rectangular panels of canvas, still show the resonance of the past, and especially its pre-Reformation culture (of which little now remains to sustain us). Romantic colourists and picturesque sourcing over the past 200 years barely scratch the real narrative of this monumental cultural edifice. But it remains a compelling force. Then in the l970s, Richard Demarco brought the European 'shaman' figure, Joseph Beuys, to Scotland, and the deeper memory seam of this past was again opened up and quarried. (The travelling documentation of the land artist Hamish Fulton here should also be remembered.)

Richard Demarco looms over the Highland recovery of the contemporary arts as a result, as catalysed by his numerous summer schools of that time treading his 'Road to Meikle Seggie' itinerantly through these northern lands in the l970s, a venture so impeded by the institutions of the time, it must be said. And here in the RSA the visitor can find a whole wall of his intricate miniature sketches assembled in memory of Beuys. On a smaller scale, the 'Road to Meikle Seggie' itself is planned out on a wall in his inimitable script, an artwork all of its own. Thankfully, through the support of the Arts and Humanities Council, and Dundee University, Demarco's own archive, from which these items are drawn, curated by Dr Euan McArthur, with a grant of over £300,000, is now securely based and under digitalisation.

The exhibition also establishes its Highland credibility by the investigation in superb colour photography of stretches of landscape, which have been prepared by Lei Cox and Mel Woods as a basis for a camera obscura project on Cairngorm Mountain itself. Alexander and Susan Maris also display remarkable photographic skill in capturing the poetry of a primeval Highland woodland first visited by Susan Maris two decades previously. She searched anew for a stunted hazel whose moss-covered hollow trunk transfixed her then. Now she finds it gone, but in its place a new limb has grown, a mythic reappearance. As with all evocation of terrain there is a mood connoting 'dwelling'. The Scottish population is defined with a large majority being urban/metropolitan, and yet spiritually and mentally it still inhabits this landscape, as it has of old, even if it cannot yet possess it. This parallels the situation in Finland, where only a century back, the Finns found themselves in a land of forest and lake, as of the epic Kalevala poetry saga based in the region of Karelia, which became a symbol of Finnish identity, also portrayed visually by the painter Axeli Gallen-Kallela, The recovery in contemporary art of Scotland's 'Karelia', likewise springs from Demarco and Beuys' Highland journeys. (The literary parallels are more numerous). The curated element of the exhibition here, reminds us of the Highland diaspora worldwide, an important element in globalism today. In his late years, Richard Demarco has become an even more vital promoter and guide for this fragile progression, leading uncountable individuals into this contemporary world, categorically linked with the historic and prehistoric, in this 'Year of Highland Culture' (as it is institutionally entitled).

Looking at the more central so-called 'conventional' categories of art on display, the two figure sculptures by Gareth Fisher, 'Cardinal' and 'Magdalene', are life-sized and stand with their human 'nobility' intact but not much else visibly as victims of having been blasted to shreds (here a major technical achievement sculpturally) by some market roadside bomb, or even tube catastrophe: a vision we have come to accept as commonplace through television coverage. Fisher showed two heads at RSA 2006. Now these figures indicate his eminent suitability for public commissioning. On a more serene note, Frances Walker's landscape painted folding screen (eight panels) reminds one of Paul Klee's similar venture almost a century ago. Heather Ross's 'Red Sky in the Morning' denies us the 'Shepherd's Warning', of the title's extrapolation into the old rural saying: and yet still establishes a psychological mood that is slightly ominous, for all the soft colouring.

Architecture is this year contained in one room, as with the Royal Academy in London. It is not dispersed, as it was in 2006, around the galleries. This is a pity, since certain of the schemes could also be keyed into the 'Highland' theme. Specifically, Graeme Hutton has been searching out the establishment of a 'not-vernacular' contemporaneity. This is evident in Hutton and David Jamieson's 'Abernyte House', shown here and in other domestic and health-related schemes of the practice. It was possible a generation ago for the late Jim Morris (commemorated here in a showing) to eschew the vernacular, which had become a strong constraint on Modernism in new building: he and others made tracks forward out of this impasse. Now it is Hutton and Jamieson's route, with a more receptive public, emboldening contemporary architecture outside cities. Robin Webster, in his superb 'House at Craignish' (also the subject of an impeccable model) develops this vocabulary further.

Just to demonstrate that Edinburgh and Glasgow architects are fully engaged in the international field, the scheme by RMJM's Tony Kettle for the 'Gazprom City' actually shows that what works in Russia could work in Leith or in the City of London. Gillespies', 'Razdory New Park' proposal for Moscow successfully combines historic principles of landscape design for informality and accessibility by establishing a formal presence on-site. Rab Bennett's 'Potterow Development' scheme for the University of Edinburgh shows that high density and quality are still combinable in a historic city like Edinburgh. The final accolade here must go to Gross Max, led by Eelco Hooftman, and Bridget Baines, based in the centre of Edinburgh, yet with schemes now across Europe.

Overall, in the Architecture Room, the 30 or so schemes exhibited by Scottish practices do reveal, at last, a new globalism drawing on a growing cosmopolitanism. 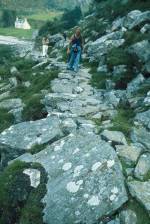 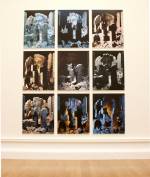 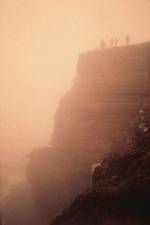 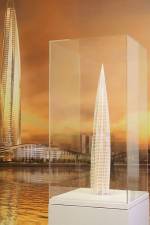 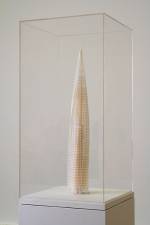 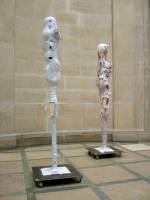 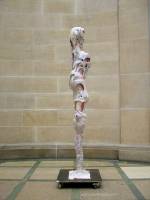 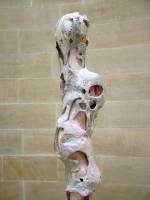 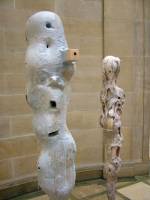