Until the 1970s and 1980s, drawings (and indeed all works on paper) were considered to be of less importance than the larger works on canvas or board that evolved from them. Traditionally, works on paper were more personal or diaristic, or they were studies for major works. The 1970s and 1980s saw a dramatic shift in the status of drawing, especially figurative drawing. Experimental works came to be considered as important, valid works in their own right. It became possible to exhibit and sell such works, and for artists to devote their careers to media that had previously been considered ephemeral, fragile and difficult to exhibit. There was also a move towards large-scale works in materials that had previously been too difficult to curate, travel or store. Such changes owe a considerable debt to the career of Helen Frankenthaler, who curator Bonnie Clearwater describes as, 'among the trailblazers of modern painting'.1 Her paintings and works on paper are pivotal in the history of modern art.

Born in 1928 in New York, Helen Frankenthaler achieved early recognition as an artist for her contribution to American abstract painting. She had her first retrospective at the Jewish Museum, New York in 1960. A seminal early work 'Mountains and Sea' (1952) completed when she was only 23, was used as the basis of a major exhibition at the Solomon R. Guggenheim, New York in 1998. After Mountains and Sea, 1956-1959, the major study of her work by John Elderfield (published Harry N. Abrams, 1989) rightly established her prominent position in the Abstract movement. A less likely honour perhaps came in 2001 when she received the National Medal of the Arts and made an Honorary Member of the Royal Scottish Academy, Edinburgh.

The exhibition, Helen Frankenthaler: Paintings on Paper (1949-2002) was shown this summer in the newly refurbished rooms of the Royal Scottish Academy. Compared to her own large exhibitions to date, and to other major retrospectives on at present, such as James Rosenquist at the Solomon R. Guggenheim, (reviewed by Studio International), the Edinburgh exhibition is modest in terms of the number of works and the scale of the works. However, in terms of the emotional intensity on show, the exhibition is significant and inspiring.

Helen Frankenthaler has always worked with paper, as well as with canvas. Her love of paper began in childhood; for the past ten years she has worked exclusively on paper. The sizes of the works do not belong in a traditional context. Frankenthaler has liberated her works on paper, many of which are 6 x 7 feet. Work on paper has been useful for her while travelling and when no studio space was available. The works on paper have a sense of immediacy, even urgency. They capture the creative act in a most candid and intense way. Paintings on Paper has travelled to Edinburgh from The Museum of Contemporary Art, North Miami where it was curated by Director, Bonnie Clearwater. She also curated a brilliant Frank Stella exhibition there in 2000 and for both she produced excellent catalogues with highly readable and informative texts.

Frankenthaler has described herself as a 'traditionalist and renegade'. She is an artist who can, 'contradict the rules of conventional compositions and still make a painting work'.2 Early critical attention from Clement Greenberg focused on Frankenthaler's technique, rather than the emotional or psychological resonance of her work. Frankenthaler and Greenberg met in 1950 and became close friends. They visited galleries and museums together in America and Europe when he was at the height of his career. It was a pivotal time in the development of American Abstract Expressionism. Greenberg championed the cause, extolling the artists for, 'opening up the possibilities of modern painting'. Although Greenberg had strong views on Abstract art, Helen Frankenthaler did not simply adopt the great man's views. Greenberg invited numerous people to view Frankenthaler's 'Mountains and Sea', including Kenneth Noland and Morris Louis who were greatly inspired to create 'Color Field' paintings with thinned pigments on unprimed canvas. In spite of her friendship and his enthusiasm for her work, Greenberg only once wrote about Frankenthaler's work in the context of an article on the work of Noland and Louis in Art International in May 1960.

In this he acknowledged in print what he had often admitted in conversation that Frankenthaler played a seminal role as a major influence on Color Field painting.

He ascribed a deeper meaning [than William Rubin] to Frankenthaler's paintings by demonstrating that her stain technique was not a means to relinquish control of the painting…Frankenthaler's stain technique, according to Greenberg contributed to the advancement of abstract painting because 'the more closely colour could be identified with its ground the freer would it be from the interference of tactile associations. The way to achieve this colour identification was by adopting watercolour technique to oil and using thin paint on an absorbent surface' so that pigment and canvas became unified 'like dyed cloth'.3

According to Greenberg, Frankenthaler's stain techniques, 'contradicted the illusion of pictorial space by emphasing the literal, physical characteristics of the painting as a flat, opaque surface'. In an interview, Morris Louis subsequently stated that Frankenthaler 'was a bridge between Pollock and what was possible'.4

In her own training Frankenthaler was most profoundly affected by Cubism which was taught by artists working in the Cubist tradition in America (Rufino Tamayo, Paul Feeley). Students at Bennington College, Vermont analysed works of art in reproduction by Picasso, Braque, Miro, Mondrian and Kandinsky. The aim of this dissection and discussion of works, according to Frankenthaler was to make them 'part of one's language'. Receptive and keen, Frankenthaler also studied under the Australian painter Wallace Harrison who reduced the painting, 'to a geometric plane of carefully calibrated flat patterns…From Harrison's instruction, Frankenthaler learned that drawing was as important as tone or colour'. Although Frankenthaler is known as a colourist, she benefited greatly from her work with Harrison where she was made to work in black and white. The sculptural quality of much of her work on paper owes much to the structure of the picture plane that was emphasised at this stage of her training.

Frankenthaler was predisposed to Cubism before she went to Bennington, but her direction was sealed under Feeley and Harrison. She remained committed to Cubism even under pressure from Greenberg to purge it from abstraction because its sculptural elements create illusionistic space. 'I have remained essentially a Cubist in my conception of space', she recently remarked. 'I think a painting can be flat and spacious at the same time.'5

Frankenthaler acknowledges the importance of her teachers and the element of luck in an artist's career. Hans Hofmann reinforced Frankenthaler's Cubist training when she studied with him for three weeks in July 1950. She moved to New York after graduation where she regularly visited museums. Kandinsky and Arshile Gorky were of particular importance to her, as was Jackson Pollock's 1950 exhibition. Clearwater describes it as, 'a revelation and her final liberation'.6 In this context she describes Frankenthaler's work beautifully.

Perhaps because Frankenthaler never abandoned painterly depth illusion, never worked programmatically, never lost her childhood delight in painting, she avoided the endgame that impeded some of her contemporaries careers. She rarely limited herself by working in series, never fell into a rut by painting by formula, or felt compelled to be true to the flatness of the picture plane. 'Mountains and Sea' remains a pivotal work in art history. However, it is important to recognize how her works that predate this landmark painting contain the potential for Frankenthaler's career-long pursuit of miraculous acts of painting. They reveal her true delight in creating spatial illusion, producing inner illumination and animated dramas.7

The sculptural quality of Frankenthaler's work has been played down historically yet it plays a vital role. Her calligraphic work on paper, often textured handmade paper with acrylic paint (she switched from oil in the mid-1960s) enables Frankenthaler to layer pigments. Many paintings on paper are created on coloured paper. Tremendous action is achieved visually. In the 1970s and 1980s a more tactile quality was created by using thick clumps of gold and silver paint. Yet in the formal process, Frankenthaler does not lose sight of the external world. References to nature are made constantly, they form an inspired dialogue between inner, private experience and the outside world or universal experience. In her 1984 monograph on Frankenthaler's works on paper, Karen Wilkin wrote:

Her best pictures keep a lively balance between spontaneity and wilfulness, between intuition and inspired calculation.8

Humour and game-playing are also key aspects of her work - playful sexuality and comic juxtaposition of objects. Her calligraphic lines often seem to have a life of their own - they flow from the artist's hand and are full of references and nuances to spiritual life and emotional experience. Chance appears to play a part and yet great control is also in evidence. Frankenthaler captures the sublime in landscape in a masterful but understated way. Her works are the product of half a century's acute observation, varied art practice and reflection. When one looks at these works it is possible to see the external world (light, forms), the history of art and a personal dialogue between the two. The exhibition Frankenthaler: Painting on Paper, is a rewarding and mysterious experience, there are works to marvel over and never completely comprehend. 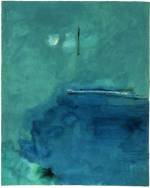 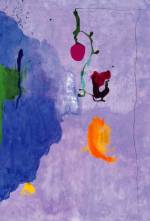