Art, Consciousness and Other Intractable Problems

Art, Consciousness and Other Intractable Problems

'Neuroscience is emerging as one of the grand belief systems informing the imagination of artists and writers in the twenty-first century',1 writes the neuropsychologist and author Paul Broks in the catalogue that accompanies this exhibition. It is certainly a rapidly evolving field, and undoubtedly the coming advances in our understanding of the brain will pose radical questions about our notions of selfhood and responsibility, even more than the emergence of psychoanalytic theories did at the start of the 20th century

As Broks knows, however, within this grand belief system are very real and important differences of opinion. There may, for example, be general agreement among scientists that a particular conscious experience is a particular brain process, but there are widely differing positions on the precise meaning of the word 'is' in that sentence; whether, for example, it means 'is reducible to', 'is equivalent to' or 'is associated with'. From such debates comes a question that relates directly to this exhibition: what would the qualia or 'raw feels' of life, one individual's sensations or thoughts, look like if they could be found in the brain?

This is a question that continues to frustrate scientific thinkers, not least because the object of study is subjectivity itself, and by its nature rubs up against the boundaries of science's objective method. An argument, it might be said, for paying greater attention to artistic approaches which might, like philosophy, help modify the conceptual frameworks through which observations gain meaning and experiments are designed.

Yet approaching the mind/brain from an artistic perspective does not simply clear the path: there are many thorny problems that carry over from science. How does any visual analysis, whether scientific or artistic, give adequate emphasis to the temporal dimension of consciousness? Any attempt to fix qualia in time risks losing an essential component of experience. What is a 'thought' anyway, and where should the artist look to find it? The notion of what thought might be has changed hugely in the last 50 years, moving from the idea of a 'language' with its own 'grammar' towards a model based on distributed processing networks, and it is still unclear onto which level a thought might be mapped, from an individual neuron to an entire brain region.

It is hardly surprising if Aldworth's work comes up short against some of these intractable difficulties. She has produced a series of etchings with aquatint called 'Birth of a Thought' (2007), one of which is displayed in the Transition Gallery's show, and appears to be based on an extreme close-up of neurons, their dendrites snaking off through darkness. But the 'explanatory gap', bugbear of philosophers and neurologists alike, is still there between the title and the work: how, exactly, is this the birth of a thought? The relationship between a work of art and its title is of course far from straightforward, but the meaning of the word 'thought' remains unexplored, and the nature of the 'is', the implied identity between the title and what is depicted, is left unexplained.

Yet perhaps this is to miss the point of Aldworth's work: as Broks points out, where science and philosophy attempt to dispel the paradox of the mind/body problem, this artist celebrates it.2 As responses to the otherness of the messy stuff of thought and being, Aldworth's 'Location Drawings' (2000-06) are indeed celebratory, the process of drawing from life in medical settings bringing a sense of wonder to these works in charcoal or acrylic ink. Pinned to the wall in a grid formation, the pattern of both modernism and medical science, they evoke both the real-time imaging that makes such delicate interventions possible, in the spread and fade of inks applied to wet paper, and the sense that beyond the meandering arteries and dark lines of bone, there is an individual life. A scribbled note on one of the drawings reads, 'Constance has a tumour at the back of her head. They are trying to see if the tumour is being fed by an artery which they will block with particles so that there is less blood supply in surgery to remove the tumour'. This marginal note, which reads as if transcribed from a surgeon's aside, turns these sketches towards a case history, and links them to a long tradition of humanist medical art.

Aldworth has clearly benefited from her residencies at the Royal London and Homerton hospitals, and has built up a visual language which is appropriate for her subject, balancing finely between the sensuous and the mortal. Her forays into the nature of consciousness outside the medical sphere are less conceptually satisfying, but this is a problem that is not uniquely hers. It might sometimes seem that artistic and scientific approaches to the mind are incommensurable, but collaborative work that draws on both has the potential to illuminate the phenomenon of human consciousness in unexpected ways, and needs to be attempted. The way we understand ourselves is changing, and artists can be at the heart of this process. 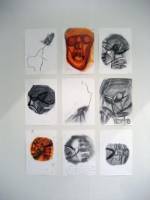 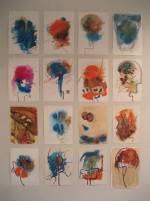 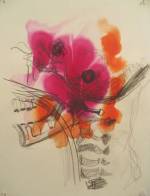 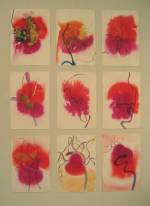