Over the centuries, time has had a curiously undervalued role in western art. While eastern artists sought to capture unfolding narratives via wall reliefs and hieroglyphs, occidental art remained largely fixated on the frozen moment. There were certainly artists who challenged the idea of painting as a static form, from the simultaneity of Pieter Bruegel the Elder’s works to the ingenious flow of time and people through architecture in Hans Memling’s Scenes from the Passion of Christ. Sequential art remained, however, primarily an anomaly, in memorable but isolated examples such as Trajan’s Column and the Bayeux Tapestry. It was not until the cubists and futurists, and the development of moving pictures that time began to assume the centrality in our art that it occupies in our lives.

Jim Campbell (b1956) is a San Francisco-based artist who has embraced the connections of light, space and time, as few others have. He uses LED technology and his skills in electrical engineering to masterfully achieve what Andrei Tarkovsky called “sculpting in time”. For this superlative exhibition at Dundee Contemporary Arts, the darkness of the rooms becomes a canvas for the lights and the illusion of motion. The galleries seem both vast and intimate. Campbell’s manipulations of space direct and reflect how our brains process visual information. He introduces the illusions and our minds complete them.

“The more precisely one tries to observe something, the more obscure it becomes,” goes the Heisenberg uncertainty principle, a maxim that could act as the motto for this exhibition. From afar, we see a video of moving figures in the work Exploded View (Commuters), 2011. The closer we get, the more it changes. Directly before it, we see that it is nothing more than an exquisite series of LEDs hanging from wires, mimicking the movement of silhouettes. Walking around it, we see further into the mechanics from a different angle. The scurrying human forms are nothing but synchronised lights flashing. It is a disarmingly beautiful lie, which reforms as we walk away from it again. It is also somehow evocative. As a child, I recall seeing the end of a rainbow dissolving into a floodplain. When I moved towards it, it seemed to retract further and further away until it appeared behind buildings in the distance. It was the illusory play of light with water as a prism and yet it seemed utterly tangible. It was real and it was unreal; a reminder that our eyes deceive us precisely in order to make sense of a world of pixels, newsprint and refracted light. That feeling is awakened here.

If Campbell’s work remained solely concerned with perception, it would be enough, but his work delves further. In an immediate sense it is immersive. The experience of Tilted Plane (2011) is akin to wading into the ocean or being surrounded by birds in flight. The space of the room constricts beneath the light bulbs and yet the dark seems interplanetary. This is expanded on in A Fire, A Freeway and A Walk (1999-2000), which resembles, to these deceiving eyes, a small eclipse, with swirling colours appearing like the solar prominences of a concealed manmade sun behind the velvet panel.

Campbell goes beyond the limitations and expanses of appearances, however. His work is revelatory, particularly at the point where we intersect with it imaginatively and emotionally. We exist within a nexus of information and perception that we are barely aware of, a nexus that is further influenced by our memories, fears, hopes and all the accompanying narratives we tell ourselves. With Home Movies 1040-3 (2011), a series of videos are shown on a large LED screen. The atomisation of visuals, which exploded the view of commuters earlier, has an even more haunting effect here. Figures appear as ghosts. They seem sometimes sinister, sometimes melancholic, sometimes ancient, reaching through a veil not simply of electricity, but mortality and fading memory. This is film as clairvoyance. Yet such views are clearly in the eye of the beholder. These might be, as the title suggests, simply home movies of families and children and no more a memento mori than any home movie is, but then that is precisely the point.

Last Day in the Beginning of March (2003) combines all of the artist’s strengths. It is set in an adjoining room, which we enter as if we are somehow entering the day it memorialises – the final day in the life of Campbell’s brother. This, of course, is an impossibility, but illusions are pervasive and what is memory but a wishful cinema of the mind? The installation is a memory theatre. Along the walls, there are plaques with short sentences of speech or description. Above them, lights dim and flicker to different rhythms, imprinted by specific patterns of recollections from that day. They pulse as breaths, heartbeats, coughing. The sound of falling rain alters as we walk around the room. It is solemn, meditative and quietly awe-inspiring, like a personal Stations of the Cross. “Every loop is a clock,” Laurie Anderson observed of Campbell’s work and this is a room filled with clocks within clocks. They may measure the last day, but they continue, defiantly and melancholically, to tick beyond it.

Life is, at our first point of contact, abstract. We make sense of it within milliseconds, but in that near-imperceptible time, our perceptions have been subtly but deeply altered by context, memory and illusion. Einstein demonstrated that light, time and space are relative: so, too, for the purposes of living, must we add the influence of our experiences, emotions and thoughts. Campbell’s stunning, innovative sculpting in time and electricity gives us much to consider; not just that reality appears illusory, but that illusions are reality. It is an exhibition that continues far beyond the confines of the gallery. 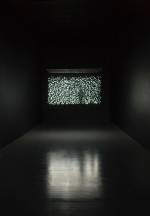