Through photographs, film and video art, in his exhibition at Edinburgh’s Fruitmarket Gallery, Canadian artist Stan Douglas blurs the borders between truth and fiction, between what we see and what we think we see 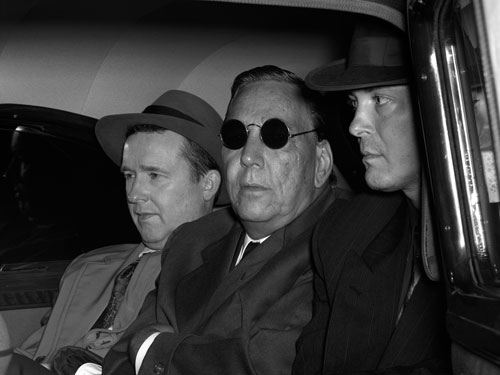 “Lying, the telling of beautiful untrue things, is the proper aim of Art,” goes the often-quoted Oscar Wilde line. This is, in itself, a lie; the assertion in question being voiced by the fictional character Vivian in The Decay of Lying, with Wilde acting as ventriloquist. There is a curious honesty in the self-confessed liar who admits lying, as well as an inevitable paradox as the philosopher Eubulides pointed out more than 2,000 years ago. In a world of deceptions, the admission of guilt becomes, if not a truth then something authentically inauthentic, even if its shape is an endless Möbius strip. 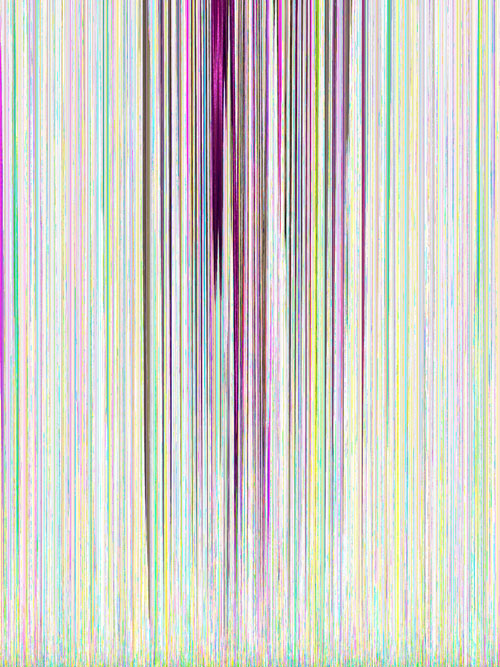 At the core of the work of the Canadian artist Stan Douglas (born in Vancouver in 1960), there exists a fascination with authenticity and the uncanny. He explores what happens when we delve into the treacherous ambiguities involved. Moreover, he suggests we have little choice in doing so. Our views are continually suspect, from the way the mind interprets visual data to the way our machines record it. The borders between truth and fiction are permeable, given the flaws and quirks of how we see things. The gravity of context in the way humans perceive objects can be deceptive. The absence of context in the way machines record objects can be equally so. We have all the free will to choose between the devil and the deep blue sea. 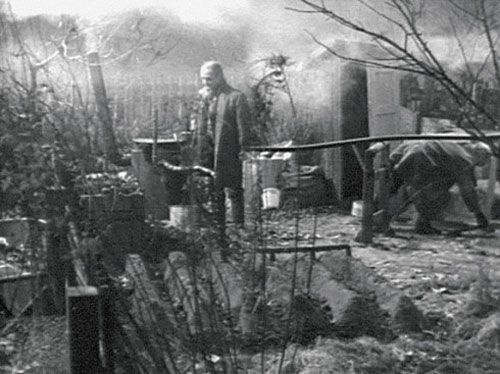 Beyond the building blocks of facts, the truth is a balanced approximation. This is most evident in Douglas’s photography. In his series Malabar People (2011), we have a gallery of characters shot in 2011 but modelled as archetypes from 60 years earlier. They stare out intensely and directly at the viewer. The connotations are unspoken, bar their titles, but each suggests narratives beyond the still image; the brusque taxi driver, the vivacious dancer, the defiant but vulnerable female impersonator, the tough but tender waitress. All these are cliched interpretations born from a million B movies; the comforting categorisation into types that allows us to dispense with the awkward and inconvenient complexities of real individuals. These are not real individuals, Douglas reminds us, and yet the detail and grain of the figures close-up, from the tension in the bartender’s gripped hands to the shadows that split their faces almost like a Rorschach inkblot to the poses that sometimes confront, sometimes allure, prove they are real in some capacity. They are, it seems, based on actual reports from 60 years ago. The camera never lies, as the saying goes, but its truth is a slippery, many-sided thing. 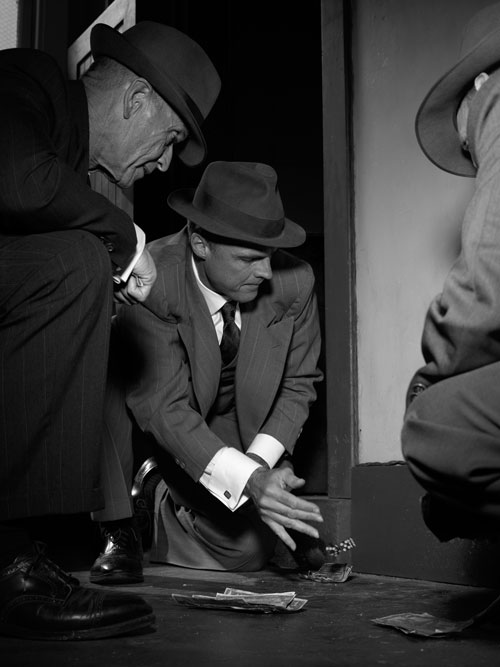 In the Midcentury Studio series of photographs (2010-11), actors similarly play characters in scenes. It is immediately obvious this is no Weegee-type photojournalist reportage. Whether in the poses or in the sheen or ageing of the images, the photos lack that intangible element that would make them seem real. Douglas is confident enough as an artist to allow us to recognise this and wonder what that missing element is and whether it is possible that some essential lie – like the ones we use to function on a daily basis – has been omitted. Yet for all their imitations, they are still genuine reproductions of a time and place. However fictional a scene, there is a point where the fiction runs out and it captures a moment in the lives of the actors. There are also intriguing quirks to the images that suggest all is not what it seems. In Dice, the mind might assume the figures are detectives crouching for forensics at the scene of a crime rather than men gambling. The sunglasses of the suspect in the photo of the same name suggests a figure as out of time and as sinister as the Clown elsewhere. In Intrigue (1948), a simple pair of high-heeled shoes mirrored become vaguely reminiscent of Hans Bellmer’s disturbing amorphous, inhuman human forms, yet they are also kitsch. In Cache, with its multiple old and modern meanings, a secret panel reveals a covert hole in the wall, a stash behind the wallpaper. It is a fitting metaphor for an exhibition concerned deeply with what lies beneath the surface, what lies behind the mirror, and the unsettling thought that there is nothing on either side of it. 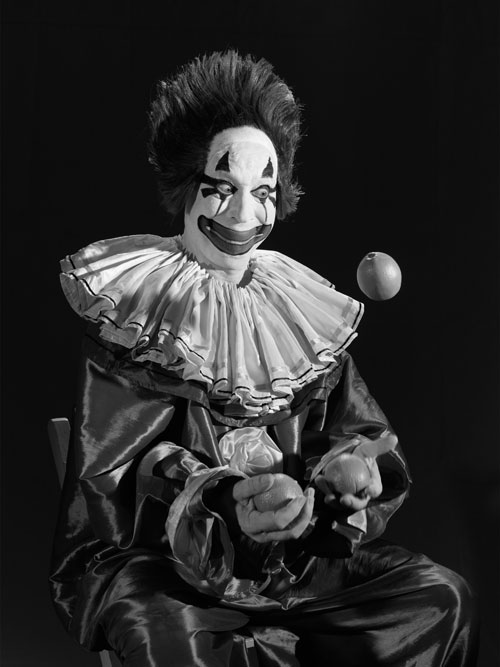 These are the microcosm, the set-pieces from which Douglas zooms out to present a replicated macrocosm. The large computer-generated backyards and tumbledown houses in Hogan’s Alley (a vast screenshot from his Circa 1948 installation) seem curiously unreal to the point of appearing sinister. This seems a doppelganger town (based on the Strathcona area of Vancouver), where every window is lit as if by automation. Though his work mimics the gangster-era of his native city, the layers through which it is filtered have a disconcerting effect, rendering it even more ominous than a strict realist depiction would. It has changed in translation. The way it glows seems almost sentient and not without an attractiveness, with the camera soaring in a bird’s-eye position. In The Second Hotel Vancouver (2014), Douglas creates a hyperrealist composite image of the earlier building in question. Both pieces invite thoughts of what is taking place in the rooms. We inhabit them with whatever degree of darkness, emptiness or fiction we choose.

All through the exhibition, Douglas has extracted images from his previous works and, in doing so, added another layer to their meaning and their dislocation. This is most explicit in his Corrupt Files pictures, which, with certain corrupted beauty, demonstrate what happens to images as raw digital information. The reason Douglas’s replications intrigue and unsettle is because this is essentially what we do in memory. As time passes, our recollections merge with other scenes, both real and fictional, until what actually happened is incidental to our recreations. The characters we remember, including our earlier selves, become akin to malleable and unreliable fictional characters. The cities we recollect seem like film sets. The objective data is inevitably corrupted. The cinema of memory comes with the proviso “based on a true story”.

Douglas’s film work is represented here by the fascinating Der Sandmann (1995) and Vidéo (2007). In the former, Douglas channels Freud’s channelling of ETA Hoffmann’s 1816 story The Sandman. In the process, Freud’s focus on “the idea of being robbed of one’s eyes” becomes the idea of being deceived by one’s eyes. In the latter, Douglas channels Orson Welles’ channelling of Franz Kafka’s The Trial, as well as Beckett’s cyclical and perception-fixated Film. We can reverse the process of Douglas’s layering, dig down through strata upon strata, and find we are back where we started. Though the exhibition is based on historical accounts and interpretations, these are scenes that did not strictly exist. Yet they exist right now in a gallery in Edinburgh if, and it is by no means a given, the cameras, our eyes and our memories are to be believed.