The Brooklyn-based artist talks about his latest show at the Lisson Gallery in London, billed as ‘a technological exploration of obsession and obsolescence’

Cory Arcangel trained as a classical musician, but the influence of his childhood home – Buffalo – and the prevalence of experimental video artists who had moved to the town from New York in the 1970s was stronger. With leading figures such as Steina and Woody Vasulka teaching at the local university, the medium penetrated every aspect of education: video art was even taught at Arcangel’s high school. He says: “I thought experimental video art was what art was and that painting and sculpture was what they taught kids. And if you wanted to be a real artist, you made weird videos.”

His work offers an immersion into the world of play, sometimes affectionate and nostalgic – hacking in to the iconic video games of his youth to strip them back to the barest, most essential landscapes of almost zen-like minimalism – and at times surreal, such as the series of “sculptures” that consisted of a community of swimming pool floats (noodles) dressed in headphones and custom-made “athleisure” wear. But though the result is often lighthearted, Arcangel is deadly serious in his interrogation of the nihilistic undercurrents of our technologically enhanced lifestyles. His new show at the Lisson Gallery – his second there, and his third in the UK – goes under the title Currentmood, which is also the hashtag he uses for his online investigations into the weird and wonderful world of web culture, and is billed as “a technological exploration of obsession and obsolescence”.

He never takes a position with his imagery – the kitsch, tacky, bland or profound are all given equal consideration and he celebrates obsolete technologies and online memes with equal enthusiasm – and he has “democratised” the content for this show, first by presenting all these works at the same size, in the same crisp white frame, regardless of quality of image or content.  Thus a digitally printed image of an Adidas item that is almost hyperreal in its evocation of the original textile gets the same exposure as a hasty, blurred snapshot street scene of a passing motorbike, grabbed from an early BlackBerry camera, or an online “shaming” image of Marilyn Manson, in all its pixillated, scandalmongering glory. So Arcangel is playing with the moment of “status” that is conferred on all the works by their context in a white cube gallery space, but at the same time, he subverts that status by running an online version of the show, which will fish for customers through a series of online adverts flagged up as “promoted content”. Thus gallery art becomes clickbait.

Studio International caught up with the artist as he was putting the finishing touches to his show at the Lisson Gallery. 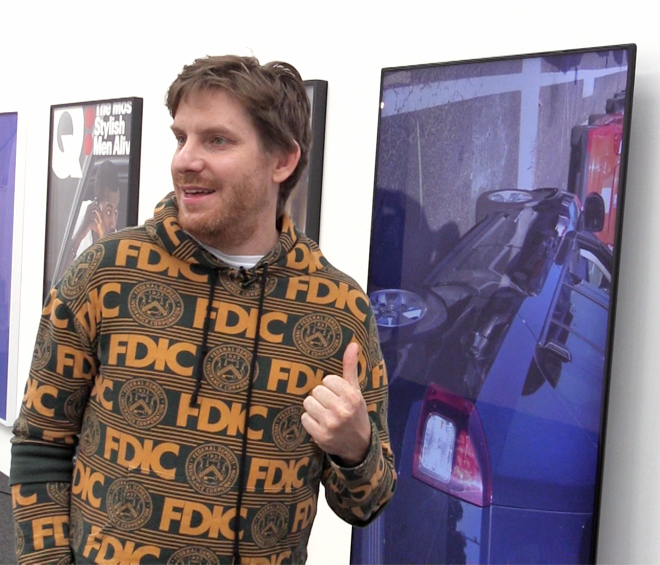