Lisson Gallery continues its minimalist aesthetic with the work of nine artists, five of whom have never shown before in the UK. Kate Tiernan went to view it

This group show, by nine artists, of paintings, prints, relief objects and works on canvas takes its title, Where Were You?, from a 1978 song by British punk band The Mekons. These works appear to have involved minimal intervention but the complex ideas they articulate belie this, demonstrating the time and labour put in by the artists. The minimalist aesthetic is something of a tradition at Lisson Gallery and this exhibition involves a dismantling of painting and minimalism in the 21st century.

Where Were You? leads with the work of São Paulo-based artist Paulo Monteiro, who is exhibiting 24 objects and paintings. These often miniature sculptural pieces cling to the wall, protruding playfully like tiny cotton telescopes or small canvases in which a line is used to divide the surface in two or highlight a corner with neon colour. A tiny piece of folded aluminium forms a clip, griping a narrow strip of cobalt-blue felt that hangs from the wall in Untitled (2014).

As we move through the monotone gallery space, an injection of colour radiates from one of Cory Arcangel’s Photoshop Gradient Demonstrations, in which he issues instructions to Photoshop: Photoshop CS: 84 by 50 inches, 300 DPI, RGB, square pixels, “Blue, Red, Yellow”, mousedown y=5750 x=8250 and so on .Conceived by mind and made by machine, the acid yellows, vivid red and midnight blue in this graphic rainbow intersect. Nearby is TBC (2014)  by Michael Rey, a large circular green panel with five peepholes. As you draw closer to look inside, you find the surface isn’t smooth but pitted with tiny irregularities from a covering of painted Plasticine.

The edges of the frames also draw attention in both Julia Rommel’s Whale Watcher (2014) , where there are glimpses of coloured stripes, and in Untitled (2014) by N Dash where they have been cut into with a nip and a tuck. The minimalist aesthetic of these works is undercut by the bold physicality of their presence, couriers of labour and craft. The visibly visceral Shape Shifter (2013) by Allora and Calzadilla was formed with layers of sandpaper that has been used by carpenters on building sites in Detroit.

Layering and erasing is a process that features repeatedly. An economy of gesture and lucid transparency is shown in Robert Janitz’s painting Love is an Object (2014), where wax creates layers of luminosity. Among the bluntness of these butting blank surfaces, a multitude of erased moments exists, resonating with one another. The absence of answers in the work is mirrored in the absence evident in the exhibition’s title: Where Were You? 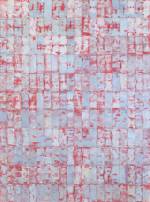 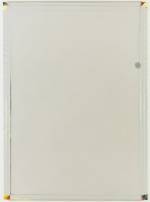 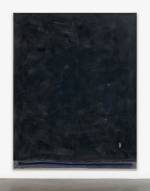