Richard Tuttle’s third solo exhibition with Modern Art shows four new bodies of work that continue his exploration of the properties of humble, everyday materials such as paper, cloth, wood and wire

For his third exhibition at Modern Art, the US artist Richard Tuttle (b1941) presents four different groups of work that were created at different times and in different locations. Using a selection of core objects, and miscellaneous ones, he has created wall- and floor-based sculptural assemblages that all vary in their spatial relationships, densities and surface areas. Two of these groups of work are titled Separation (Group 3) and Separation (Group 4).

The works in the exhibition are constructed using the same palette of materials that Tuttle has used in the past, including paper, cloth, wood and wire. These simple materials investigate the contradictions between line and volume that he investigated in early works such as his Paper Cubes (1962) and series of 48 Wire Pieces (1970-71). The contradictions lie in his very existence as an artist; as a sculptor Tuttle’s interest is formed by objects, and as a minimalist, his interest is line.

The exhibition is timed to run alongside a major show of Agnes Martin at Tate Modern. Tuttle worked as a studio assistant for Martin in the 1960s and they became close friends. He described his interest in Martin’s work and her use of the “primary line” in drawing, the most basic sense of line, which lies at the basis of our reality. This is what he attempts to achieve through sculpture, searching for a three-dimensional sense of line. He chooses sculptural lines such as a thin thread to be woven, a bamboo skewer or a roll of wool.

The wood Tuttle works with is, more precisely, timber. His material is wood that has been processed and turned into shapes and forms that can be bought in multiples: the smooth, manufactured point of a bamboo skewer, more commonly used for school science projects and barbecues; regularly stepped pine moulding for window frames and skirting boards that Tuttle uses as a wall fixture for a Styrofoam board; the smooth surface of a plywood panel, sold for shelving and signage. Using timber, Tuttle bypasses the natural associations of wood and moves straight to the material of everyday reality.

Each piece of timber is a component among other recurring materials in both series, which include canvas, acrylic and pushpins, while some miscellaneous objects make one-off appearances. Each work is a slight variation of another, but the formulas produce different answers every time. Like materials piled up in DIY stores, each material will solve somebody’s particular problem.

In Group 4, miscellaneous objects include a crumpled piece of paper, shiny silver synthetic fabric and a plastic box drawn on with a marker pen. Selected by circumstance, location or simple desire, like colour, they offer a detour from the original frame, like an unassuming visual focus or a weak crescendo.

The two other groups of works in the exhibition are denser and more concentrated, more fixed and consequently they give more impact through material, colour and shape than the Separation series. Tuttle’s Separation series works refuse to make an impact because of their humble, multiple materials and their unfixed construction. They are anti-impact, but hold greater potential.

The sculptural lines that Tuttle draws create more possibilities when they are unfixed, not just conceptually, but physically, because they rely on walls, floors and other objects to function as sculptures. They have the ability to change and collaborate in different ways.

Across the two Separation series, the closest relationship between two materials is acrylic and canvas, a relationship that limits their potential for change. In Group 4, acrylic absorbs, dries and crusts into canvas. In Group 3, acrylic is used on top of synthetic batting, a white cloud of light, fuzzy fabric, on which the paint lies on the top layer in a rough houndstooth-type pattern of green and pink. The paint has dried hard on top of the fibres. Like the plywood leaning on the wall, the paint depends on the canvas to take its form, but the bond is much stronger. Tuttle has worked a lot with textiles in the past. His last major show in London, at the Whitechapel Gallery at the end of last year, was centred around his interest and experiments in textiles titled, I Don’t Know. The Weave of Textile Language, which ran alongside a Tate Turbine Hall commission.

Chris Dercon, director of Tate Modern, worked with Tuttle on a show in Ghent at Albert Baronian. It was Dercon’s first job in an art gallery, as a “concierge”. He helped to install Tuttle’s miniature wooden and paper works, which took at least three weeks, because they each had to hang on a copper nail 1.84cm from the floor. After a successful opening, Dercon received a postcard from Tuttle saying he would like Dercon to rehang the works in the exhibition because: “Once the order has been found, everything can be changed around.” The potential of these objects, therefore, is their ability to separate. 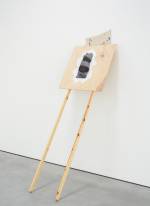 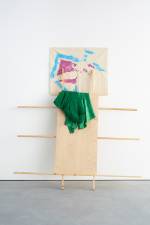 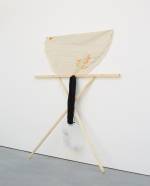 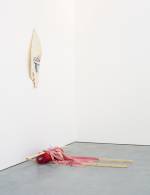 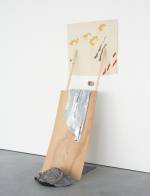 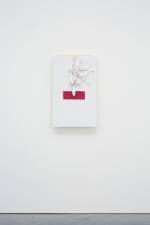 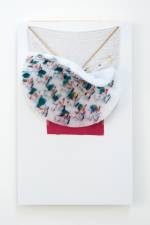