The Lisson Gallery in London took the phrase 'Imagine Action' as the title for its recent summer exhibition, crystallising the contributing artists' focus on the social, the political, the utopian and the spaces in which these aspects of human aspiration meet. According to the gallery's promotion, the title comes from Swedish artist Luca Frei's abstract sculpture of a tree and benches, included here but first shown in Frei's solo show, 'To Imagine Action'. This work represents a public sphere as a place of community where people engage in dialogue and create collective knowledge.

The word 'imagine' suggests a very special relation with another strong concept: image. All of the works selected for the exhibit are connected to an image that is not there; the image is produced when the viewer is transported by the artistic imagination that conceived the work. A dual definition of the word 'image' develops from this process, the first one of an image that registers as an action, in this case an action raised by artistic expression, and the second interpretation of the image as the action itself, or also a process. The selection of nearly 30 works from 16 contemporary artists of different origins and backgrounds that the Lisson Gallery and guest curator Emily Pethrick brought together entertains both interpretations in a single coherent discourse.

'Imagine Action' draws on remarkably diverse concepts and images for a strong central motif: the imaginative act which originated images. As such, video installations and slide projections in movement were well represented. Nevertheless, the gallery's divided spaces (at the same street in London) also contained static images, with sculptures, drawings, paintings and photographs amplifying the curatorial theme. An intensive dialogue between different types of artistic manifestation was the result. Works of art which might have seemed aesthetically antithetical were well combined. The association of the works and the various interpretations of 'imagine action' brought about a third and complementary dimension: images that intend to provoke action, particularly social action.

More important than the nature of these actions is how they are inducted. The works are grounded by the idea of inclusion: they awake the collective consciousness of viewers, including them in the dynamics of artistic creation. The Brazilian artist Ricardo Basbaum, for instance, showed wall drawings that proposed a series of games in which the players are identified using randomised signs labelled 'you' and 'me'. With these games, Basbaum illuminates how human beings assign a place for the subjective when the logic of socialisation has not been determined. In Basbaum's dynamics, the large wall drawings allocate the viewer as a posterior element of the diagram that can be recognised by pronouns. The subjectivity is converted in a single word that does not represent anyone specifically and, therefore, embraces everyone. A performance of the artist's 'me' and 'you' exercises and choreographed games were among a number of events planned for the exhibit.

The room displaying Basbaum's drawings also contained a tall sculpture made with glasses called 'Bambus' (2006) by the German artist Judith Hopf and a photographic series entitled 'Sheep' by the English artist Josephine Pryde. Having the repetition of the same element as subject - in the first case glasses, and in the second many photographs of a sheep - these works participated in a dialogue centred on identity. Also, Hopf showed 'Hospital Bone Dance' (2006), made in collaboration with Deborah Schamoni. The sketch-like humour presents a day in a nurse's life. In this piece, the artists deal with unexpected events, demonstrating the conflict between the sterile, somewhat severe and often intense system of a large hospital and lighter, even nonsensical, situations. The video art addresses, with humour, the idea of breaking through regular routine to stimulate change in perception. Moreover, videos like the Danish artist Henriette Heise's 'A Room of One's Own, Part II' (2002) and a slide projection, 'We all laughed at Christopher Columbus' (2006) by Sweden's Runo Lagomarsino, played with the concept of identity, displacement and position in the world as well.

Working within a group experiment like Basbaum but using different tools for negotiating the sense of inclusion, the Canadian artist Althea Thauberger developed 'Social Service? Art Project' (2006-2007), a long-term art workshop captured in a black and white video. For nearly four months, Thauberger guided a group of young men who were serving an atypical military service option in Berlin. The young men could choose to serve the community rather than train in and handle weapons. Their authorities allowed, as part of their service, that the men had regular meetings with the artist to discuss a range of topics regarding their lives. Afterwards, the discussions were made into a film performance with a scaffolding construction as the setting. The group produced a narrative in which they expressed by strong movements, sometimes dancing and sometimes acting, their compelled condition and how they would be welcomed again into 'normal' life. The group was accepted in a social environment they were not used to, one that encouraged them to freely think about their situation as a troop. Thus, the young men's collective imagination provided a rich source for Thauberger's art.

Frei's work was one of the highlights of the show, and perhaps this is why it sparked the idea for the exhibition title. Frei built an emblematic public space inside a private area, the front space of the gallery. The installation is the structure of a tree constructed of iron and bearing colourful Plexiglas® hexagons like fruits. There are six benches around the tree, painted in purple, blue, orange, red, yellow and green. Frei's 'Untitled' (2004), which could be seen from the street by the gallery windows, attempts to reproduce an ordinary urbanised square area that could be found in any city. It functions as an invitation to move into a space that is visually familiar for the visitor. The work is disarming because the space does not, in fact, make a person feel part of it. Since the space is artificial, it provokes a feeling of inclusion by creating a shared sense of strangeness.

Korean artist Haegue Yang's work 'Relation Irrelevance' (2006) was installed in the gallery's main space. Yang created the work with a ball-shaped lamp and a spotlight. As the light projects the shadow of the lamp, the viewer's discernment becomes confused. The basic element of the work is not the object but its black image on the gallery's wall; the defined boundaries between the work, the exhibition space and the viewer's perception are challenged. Yang's concept echoes a video produced by the Dutch artist Falke Pisano. In her video, Pisano shows, page by page, an art book that contains photographs of works by the Spanish sculptor Eduardo Chillida. Her perceptions and subjective feelings are the abstract material from which Pisano made 'Chillida: Forms & Feelings' (2006), a two-channel video containing the register of her comments about Chillida's art. In addition to these works, displayed in the same room was British artist Gareth Jones's sculpture. With its simple geometric shape and coloured floor space, Jones's 'Untitled Structure' requires the participation of viewers' imaginations, as it could be considered a more 'silent' work with few elements to initiate specific reactions.

Other works in 'Imagine Action' included the American Dan Graham's filmed performance 'Performer/Audience/Mirror' from 1975. The 65-year-old Graham, who has been working the longest of all exhibition participants, repeated the performance in the gallery on the opening day. Nonetheless, the video - nearly hidden in the gallery close to the reception desk - shows the artist at 33 years old standing opposite a seated audience while explaining his gestures and behaviour. Behind him and facing the audience, there is a mirror which entirely covers the back wall. While he speaks, the audience can see themselves and his image reflected in the mirror. Then, Graham turns to the wall and describes the audience looking in the mirror. He mentions when someone in the audience is speaking, smiling, looking at his or her watch, chewing, and when members of the audience touch their faces or rearrange themselves. As the artist speaks, the audience is included in the performance as the main element. The primary action (the performance) is the describing of the audience's acts.

'Imagine Action' originated primarily from the included artists' interest in the possibility of imagining actions through images. By convincingly juxtaposing subjective perceptions, social positions and political concerns, the show surpassed the curator's first intention. In fact, the exhibit constituted a visually strong reactive discourse and commentary on how imagination as a tool can stimulate change. 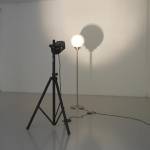