Published in Artforum in 1967, Robert Smithson’s A Tour of the Monuments of Passaic, New Jersey is a travelogue, beginning at the Port Authority in New York City and ending with a sandbox in a playground in Passaic. The choice of Passaic is important not simply for its proximity to New York City, but because it is the artist’s hometown.

The role of New Jersey in Smithson’s oeuvre is the subject of a focused exhibition currently on view at Montclair Art Museum. Although often overlooked, the Garden State has recently been receiving long-overdue attention for its role in the postwar avant garde, in exhibitions such as this and the recent New Jersey as Non-Site at Princeton University Art Museum, which explored the radical work produced there by figures such as Gordon Matta-Clark, Dan Graham, Allan Kaprow and, of course, Smithson.

Unsurprisingly, the exhibition at Montclair begins with Passaic and the photographs that formed the basis of Smithson’s seminal essay. Within his larger practice, photography is usually understood in reference to the artist’s definition of “site” and “non-site”, or the idea of transmitting information from a site outdoors to viewers indoors and thus establishing a relationship between a site and its representation. Although the images from Passaic were not originally shown in a gallery, the same concepts of site and non-site apply. In this text, photography is shown as a tool with which one can “make” sculpture, a row of waste pipes from a factory are photographed and retitled The Fountain Monument, while a lone sandbox in a playground becomes The Sand-Box Monument (also called The Desert). The six photographs that structure Smithson’s text were later reprinted by the artist and displayed as works of art in their own right. In the current exhibition, it is interesting to consider how Smithson’s concept of site and non-site find themselves strangely repeated when viewing the photographs extracted from the article.

Juxtaposed with the photographs from Passaic is a previously unknown photographic series, Suburbia (ca1967), which is also Smithson’s earliest New Jersey-based work. With a hesitant, though arguably more critical eye, these images capture in vibrant colour mundane scenes such as an empty parking lot, a small private pool, a brick wall and a tollbooth on the highway. Rounding out this display are 24 supplementary photographs from Smithson’s trip to Passaic, including a number of views of cars from behind and stretches of road, adding a greater sense of the pilgrimage the artist took to write his seminal essay. Seen together, it becomes obvious that all three sets of photographs are simply a collection of facts, similar in their documentation of vernacular culture to Dan Graham’s Homes for America (1966–67), but without adopting the latter’s serial regularity.

The neat order and structure in Smithson’s projects comes later, evident in the precise collating of information for the non-site of the Pine Barrens (1967–68), including a map, typed description, sculpture, and a group of photographs and a similar project for the Franklin mine site (1968). While engaging in the transformation (or perhaps transportation) of site to non-site, Smithson manages to render what may seem to be the most banal subject matter and material – pieces of rock organised into geometric wood bins or a uniform grid of black-and-white photographs of an abandoned mine landscape – strangely poetic in their presentation of matter-of-fact information.

The Great Notch Quarry in Montclair itself provides the setting for one of the most sublime pieces in the show, four photographs of a rectangular mirror balanced precariously over a narrow, steep crevice. Seen both vertiginously from below and from a bird’s-eye perspective above, the strip of reflective glass is both strange and entrancing, a useless bridge that still manages to connect the gap between the rocks and reflect the snowy ground and hazy, white sky back at each other in an eloquent duet.

In A Tour of the Monuments of Passaic, New Jersey, Smithson bridges a number of complex artistic debates. However, it is hard not to wonder when looking at the snapshot aesthetic of the photographs taken with a cheap Instamatic camera and rereading the somewhat purple prose that accompanies them, if this text is not simply a parody of the photojournalist tradition or even a self-conscious critique of the conceptual ideas of land art itself. Humour in many ways allows Smithson to address the clichés that haunt his home state. One of the most disappointing aspects of the current exhibition is that is does not mine deep enough into the very basic question “why New Jersey?”, aside from the fact that it is where the artist was born and was close to his studio in New York City. New Jersey has long been characterised as a “drive-thru state”, clogged with highways: Smithson takes these facts and works them into elegant sculptures, such as Non-site: Line of Wreckage (Bayonne, New Jersey) (1968), composed of concrete chunks from a former New Jersey highway, reverently enclosed in a red steel case. Here, an allusion to ancient stone ruins mingles with references to the driving migration to the suburbs facilitated by these mazes of freeways and underpasses, as simultaneous symbols of urban blight and renewal. Smithson was one of the chief mythologisers of the many postwar artists that found in New Jersey space to expand their practice. The artist’s non-site installations, with neat maps and directions, may sadly no longer lead to the places Smithson sought to direct his viewer, but collected together at Montclair it is intriguing to start to ponder why and how they affected the artist’s work. 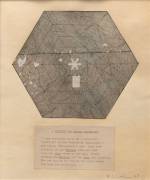 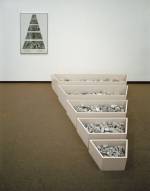 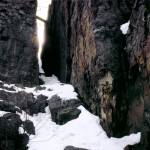