Despite leaving an archive of more than 1,000 slides and 60 films, as well as myriad drawings and sculptures, Ana Mendieta’s name, sadly, usually crops up only in relation to the tragic – not to mention suspicious – circumstances of her death.

In 1985, aged just 36, she fell from a window of the 34th-floor apartment she shared with her artist husband, Carl Andre, whom she had married less than eight months before. Given the tempestuous nature of their relationship, exacerbated by her growing success, many believe she was pushed. Andre was charged with her murder but acquitted after a third trial. The suggestion of suicide has been dismissed as unthinkable by her family and friends, but many critics have, regardless, analysed her work, in particular her Silueta (Silhouette) series, as a rehearsal for death: uncannily, the way in which she fell on to the roof of a delicatessen below her apartment mirrors the outlined silhouette shape, with one arm raised in a stylised pose reminiscent of the Great Goddess, of so much of her work.

Mendieta’s sister, Raquelin, who has taken care of Ana’s works ever since, overseeing the archive as both sister and scholar, is keen that the Cuban-born artist should be remembered in her own right. Some biography is necessary – Mendieta, born in 1948, was sent with Raquelin, aged 12 and 16 respectively, as part of Operation Peter Pan, to Iowa, where for five years they lived as wards of the Catholic Church, in orphanages, institutions and foster homes, until their mother and brother could follow them; their father was unable to escape his political detention and only joined his family in 1979. However, a purely biographical reading of Mendieta’s works tends to reduce them in meaning and overlook much of their value. Rarely considered outside the context of feminism or the work of other exiles or artists of Latin American origin until the mid-1990s, Mendieta’s “earth-body sculptures”, as she referred to her Silueta series, play an important part in the history of land art as well, and ought, despite their understated power and restriction in scale to her own body size of just 4ft 11in, also to be considered alongside those of fellow earthwork artists, such as Robert Smithson (1938-73), Michael Heizer (born 1944), Lita Albuquerque (born 1946) and Andy Goldsworthy (born 1956). Her oeuvre, nevertheless, defies categorisation, and it is in this neither-one-thing-nor-the-other-ness that Mendieta’s abiding spirit is to be found.

Spanning so many genres and media, it is not surprising that her works have appeared in many group shows, repeatedly being tailored to different contexts. The Hayward’s new exhibition offers the chance for a large cross-section of her works and, excitingly, until now unseen footage and contact sheets from her archive to be shown all together, demonstrating her process and development, and allowing us to tease out new themes and threads, previously overlooked. Displayed largely chronologically, the exhibition opens with her earliest works, produced while still a student on the new master of fine arts course in intermedia at the University of Iowa in the early 70s. These works, some of which play with gender and performance, others of which make shocking use of blood – in particular the re-enaction of the scene of a rape that occurred at the university at the time and was reported in the news – formed, Raquelin suggests, part of Mendieta’s search for her own identity, as well as an attempt to exorcise and overcome her greatest fears.

In 1971, Mendieta travelled to Mexico. Here, she rediscovered a sense of her Cuban roots. In the following years, she returned often, with her tutor and lover Hans Breder, and it was here that she began her Silueta series with Imagen de Yágul in 1973. Over the next seven years, she created more than 100 silhouette works using a variety of materials, including earth, wood, grass, flowers, leaves, moss, algae, mushrooms, pebbles, ice, fire and gunpowder. The works were documented with photographs, Super-8 films and 35mm slides and these are all that remains, and, indeed, all that even contemporary audiences would have seen of these works. In her first key solo exhibition, held at the Corroboree Gallery of New Concepts, University of Iowa, in 1977, Mendieta presented 27 small-scale colour photographs, unframed and mounted on board, of her Silueta works from the previous two years. This exhibition is reconstructed here so as to give some insight into the artist’s own handling and showing of her work. Alongside it, however, we are able also to watch videos, look at further photographs, and even enjoy a reconstruction of Ñáñigo Burial (1976), a silhouette of brightly burning black candles laid out on the gallery floor.

It is this, and the ensuing rooms of later works, which, for me, really make the exhibition a success. As Mendieta’s approach developed, she began to carve her Silueta into the walls of caves, in a series known as the Rupestrian works. She took black and white photographs of these using a better quality camera, which allowed her to make larger scale prints. In fact, in her 1981 exhibition at AIR Gallery, New York, also in part replicated here, the prints on display were almost life-size. This is where her empty, vacated forms really cry out to be heard; this is where her deliberate corporeal absence is so chillingly felt.

The penultimate room, just before the research space, showcases some of Mendieta’s final works, made indoors, once she had her own studio space in Rome, after winning the prestigious Prix de Rome from the American Academy. Neolithic silhouettes, made on the floor from a mixture of sand and dried earth, and upright, totemic, limewood sculptures, with life-size figures burnt into the trunks with gunpowder. Walking among them, you can almost feel the artist’s ghostly presence.

While I would not wish to disparage the earlier, smaller photographs, there is perhaps a sense of having seen them on just such an impressive scale in books and catalogues aplenty. In a show of this breadth, it is the louder and larger pieces that capture one’s attention and cause the echoes of their creator’s absence to resound within the gallery’s high concrete walls. That said, for the research room alone, this exhibition is well worth a visit: for seasoned Mendieta fans, for those who have only heard of her in the context of her death, and for ingenues alike. You will come away never again to forget that this diminutive Latina woman was an artist to be reckoned with in her own right. 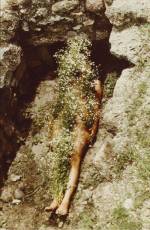 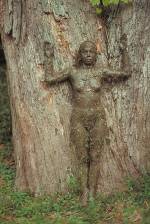 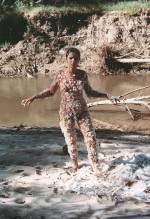 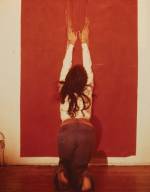 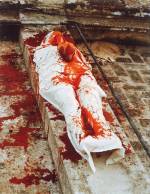 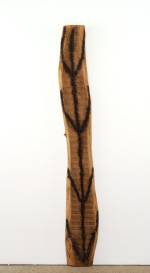