“My ambition as an artist is to be the ‘Turner of matter’,” Carl Andre (born 1935) has said. “As Turner severed colour from depiction, so I attempt to sever matter from depiction.” As such, Andre became a leading artist in the emergence of Minimalism in the United States in the mid-60s, making sculptures out of ordinary industrial materials – wood, bricks, and metals – arranged on the floor in simple linear or grid-like patterns. Following a visit to Stonehenge at the age of 19, Andre has worked with the idea of “sculpture as place” rather than the more traditional concept of “sculpture as form”. Although his life has been overshadowed by controversy – not least because he was tried (though later acquitted) for the murder of his wife, Ana Mendieta, who fell to her death from a window in 1985 – fellow artist Richard Serra’s claim that Andre “changed the history of sculpture” is not an exaggeration, and the eight works in this exhibition, accompanied by examples of his poetry, seek to justify this claim.

Turner Contemporary, Margate, until 6 May 2013. 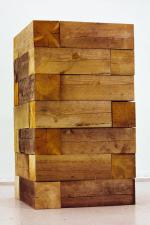