Anyone who hasn’t yet heard of Chiharu Shiota soon will have. Taught by Marina Abramović and influenced to such an extent by Ana Mendieta that she believed herself to be an incarnation of the tragic Cuban, her ethereal installations blend Lygia Clark with Christian Boltanski, innocence with experiences of trauma, unbearable weight with the lightness of being.

Born in Japan in 1972, Shiota has been based in Germany since crossing the globe in 1996 to study under Abramović, initially at the Hochschule für Bildende Künste in Braunschweig, and latterly at the Universität der Künste, Berlin, where she has been based ever since. “It’s a funny story,” Shiota explains. “I wanted to study with the Polish artist Magdalena Abakanowicz. I got their names mixed up, but Marina accepted me anyway, and I began my life in Germany.”1 A fortunate mistake, it would seem, for Abramović clearly taught Shiota a lot about the power of the body in art, the value of duration in performance, and the suggestive possibility of absent presence.

Having experienced cancer as a young woman, and last year both losing her father and suffering a miscarriage, Shiota has had her fair share of physical and mental pain, confronting the boundary between life and death and learning the ability of the body to let down its incumbent spirit. This is apparent in her pastel drawings, numerous of which are on display from her Red Line series, produced earlier this year, recalling Mendieta’s Body Tracks (1974) in their suggestion of bloodied hands and arms smeared across the page. Similarly, her film works, such as Red Body (2013), in which she smears a blood-like substance on to her bare chest, and Red Foot (2013), in which she paddles in a puddle of “blood” sunk into the muddy ground, evoke the earth-body works of her Cuban predecessor. These play their loops to a soundtrack of foreboding piano notes, echoing audibly throughout the entire third floor gallery space, adding ominous layers to her two large-scale installation works, the real stars of the show.

One of these pieces, Letters of Thanks, is a reworking of an installation first created for the Museum of Art in Kochi, Japan, in 2013. As a child, Shiota would often visit this museum with her father, who would say: “It would be great if you could have a solo exhibition in a place like this some day.” In fact, this was the one exhibition Shiota would have wished to show her father, but, sadly, he was too ill to go with her and died shortly after it ended. Instead, she dedicated it to him, wishing to thank him for raising her. The work comprises some 2,400 letters of thanks written by people from all over Japan – from children just learning to write, who often filled their pages with brightly coloured drawings as well, to elderly people with really heartfelt messages. Shiota then weaves these letters into a web of black wool, like flies caught in a spider’s web, except that the pages are lit, as if from within, and so they seem very much alive. They hang, caught in the web of time, transcending time, place and voice, crossing the boundaries of all four dimensions. The strings are knotted and tangled, representing relationships past and present, nodules of interaction, webs of communication. There is a strange beauty to this work, something portentous, casting shadows, with woven archways both inviting and forbidding.

The second installation was created especially for Walsall, with 400 vintage suitcases suspended with red ropes from black netting on the ceiling, cascading down in height so that some hang high above, casting multiple elegiac shadows, while others almost kiss the ground. A strange underwater reef or a fast-flowing waterfall, each suitcase packed with a lifetime of tales, the baggage we pick up as we travel through our lives. Many might also see references to Auschwitz, but I think this work has more personal motivations. Battered and bruised on the outside, the suitcases are displaced – perhaps like the artist herself, who notes she is always referred to as a Japanese artist in Europe, but a Berlin artist in Japan. Furthermore, the use of red strings is a move away from her usual black, suggesting blood flow, arteries, a life force. “The structure of my dark, heavy works might seem to be the same now as it was in the past,” Shiota says, “but at some point I made a definite switch, going not from life to death but death to life. Even though I still make work out of the same black yarn, I started wanting to create things out of flesh and blood instead of things that reeked of death.”2

For Shiota, it is all about interaction and communication. Relationships bring feelings to life. “String,” she says, “is like a feeling. The string is tight or tangled or cut. It’s like a relationship from human to human. It’s a mirror of my feelings.”3 The letters in her web are evidence of existence; the suitcases are footprints of travels – leaving tracks, making physical, voicing aloud. As the title of the show sums up, life exists primarily as a series of dialogues.

References
1. From email communication between Shiota and the art critic Omori Toshikatsu, 2013.
2. ibid.
3. Shiota speaking in a short film to accompany the exhibition, playing in the gallery foyer. 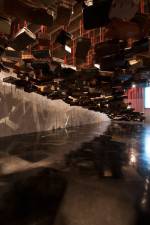 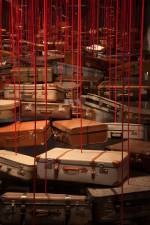