Mira Schendel: “You shall see the difference now that I am back again”

Mira Schendel: “You shall see the difference now that I am back again”

Tate Modern presents until 19 January an immaculate exhibition of Mira Schendel’s work. Schendel (1919-88) settled in Brazil in 1949, a Jewish refugee from fascist Italy, becoming known as one of Latin America’s most important postwar artists. The catalogue informs that the exhibition is “the largest display to date”, the phases of her work “very well shown, building up a more accurate idea of its extent”, according to art historian and curator Guy Brett in a video for TateShots.

Taking up 14 rooms, the whole of the building’s third floor, the subtle, quiet resonance of Mira Schendel’s drawings, paintings, collages, transfer letterings, hanging pieces – of candid yet sophisticated material and shape – is very cleverly elucidated by the curator Tanya Barson. Succinct explanations on the ideas of the philosophers related to each set of works – Schendel originally a student of philosophy – enlighten her use of fundamental shapes in an organic intuitive geometry, her experimention with media, as well as her exploration of language, letters, words, idioms.

As an example, The Return of Achilles (1964), one of the artist’s earliest experiments combining word and image, alludes to Homer’s epic poem The Iliad and incorporates a sentence from the theologian John Henry Newman, “You shall see the difference now that I am back again”. An opportune caption tells us that Cardinal Newman was interested in “ways in which individuals become certain of things that cannot necessarily be proven’, in ‘illustrating a moment of decision, which therefore reveals individual judgement and action based on faith and conviction’.

The core of Mira Schendel’s creative endeavour could well be encapsulated by this idea, the pursuit of creative episodes that enact these very powers: decision, certainty, conviction, faith. Hence her interest in game theory and the study of decision-making, in close relation with the theories of German philosopher Max Bense relating mathematics and art, especially in concrete poetry. Nevertheless, this interest was intrinsically attached to the sensual, a felt corporeality, the “lived body” or “bodily experience”, that Schendel – through the new phenomenology of another German philosopher Hermann Schmitz – believed to regulate space. With her lines, letters, flat or malleable hanging surfaces, she aimed to, in her own words, “stimulate the space” or, as Tanya Barson understands it, “activate the void”.

The attempt to activate the void is noticeable in her calligraphic works, particularly the exhaustive series of 2,000 Monotypes from 1964, in which she exercises the infusion of unexpected energy into her otherwise mostly calm, naturally regular handwriting, distributing it throughout the field in her recurrent subtle asymmetric mode. Transparency, the projection of shadow, perforation, division of a field by a line, are as many aesthetic contrivances to show this very sensual activation, ways of creating a rupture of planes, of providing the continuity between realms, between items pertaining to different categories, conciliating materiality and immateriality, ways to approach the challenging paradox of the nature of language.

In the exhibition, the chronological arrangement of her work allows the viewer to follow Schendel in this refined labour. Born in Zurich in 1919, she moved with her mother to Berlin and then to Milan, where she informally studied art from 1930 to 1936. She began to study philosophy in 1937, but was forced to stop that same year when a decree was issued that forbade Jewish people to bear Italian citizenship or attend university. She lived in Sarajevo from 1939 to 1944, returning to Italy to live in Rome from 1945 until 1949, when she moved to Brazil. In 1953 she met Knut Schendel, the owner of an academic bookstore in São Paulo and, in 1957, their daughter Ada is born.

Schendel’s first Brazilian paintings, from 1950, are influenced by Giorgio Morandi and Paul Klee, their figurative themes already very geometrically depicted and organised. During the 60s, this organic geometry, mostly still-lifes and architectonic facades, would evolve into the form of abstraction that, in Barson’s appreciation “stresses the artwork as an independent object”. From 1964, with The Return of Achilles and several untitled works, Schendel establishes a set of fundamental items – the gateway, the shield, wheel or sphere, the spear or arrow, the spiral, and the insertion of sentences or words – and develops the calligraphic series Monotypes (Monotipias), using several languages, including Portuguese, Italian, German and English.

In 1965-6, she created the series Bombs, electing specific words such as “sim” (Portuguese for “yes”), using the colour red in her otherwise nearly monochromatic production. She also created the series of creased, knotted rice paper soft sculptures Little Nothings (Droguinhas), and Little Trains (Trenzinhos), blank rice paper pages left loose, suspended across the space on a cotton thread. It is difficult not to establish a relation between these pieces and the political situation in Brazil at the time, the effacing or crushing of language under dictatorial rule. Other hanging pieces, such as Variants (1977), display language throughout space – letters, cursive scribbles, notations, or otherwise lyrics from songs, poems – seemingly enacting a subjective yet concretely sensorial property of language, enabling its apprehension by, and its impact through, the whole body.

From 1954 to 1956, Schendel exhibited in the São Paulo Museum of Modern Art and participated in the Third Bienal de São Paulo, a period also marked by her “burgeoning friendships”, in art historian Ana Avelar’s words, with the physicist and art critic Mário Schenberg, the psychoanalyst, poet, translator and art critic Theon Spanudis, and the philosopher Villém Flusser. In 1962, she resumed exhibiting in São Paulo. In 1965, her Monotypes were shown at the Eighth Bienal de São Paulo, where she first met Guy Brett, an encounter that led to her first journey to Europe since the war, to show her work at the London gallery Signals, in 1966.

The present exhibition can be seen as a culmination of the interdisciplinary network enterprise initiated in the 60s by Guy Brett, Paul Keeler, and David Medalla with the gallery Signals, a project devoted to experimental art and to showing the radical ways in which in the international context artists were “attempting to reframe contemporary art”, as Barson summarises it. Throughout the first decade of this century, a number of international artists who had shown at Signals during the 1960s saw their work presented and acquired by Tate Modern, including the Brazilian artists Helio Oiticica and Lygia Clark. Schendel is another representative of this generation of artists, having taken part in the Brazilian Concrete initiative and its further developments, her work now getting a wider recognition. 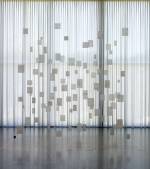