A person, unmarried, and living for most of his life in a dingy apartment in a north Italian city: at the hottest time of summer perhaps going up to a village in the nearby Apennines, or sometimes travelling by day and passing to other cities to visit exhibitions, then otherwise continuing to paint still lifes of groups of bottles. The process is reflective yet unchanging for all of his life; a still, contemplative life. 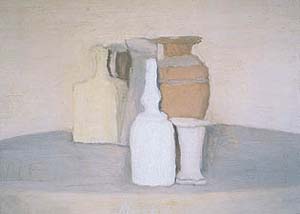 Such a life requires certain characteristics and a known context. Giorgio Morandi, who lived this life, was searching for the unknown in his compositions and technique. Of course he was a loner; perhaps he even suffered from agoraphobia. Such a story might be found in the pages of the writer Italo Calvino; the context described, but never truly explained.

Giorgio Morandi taught graphic arts close to his home as a professor at the Bologna Academy of Fine Arts. But his studio remained his bedroom, in the house in Bologna where he lived with his three unmarried sisters. Perhaps the closest he got to a companion in human form was the dressmaker's mannequin that appears occasionally in his early works.

Was there a voyeurism about Morandi's work, epitomised in his landscapes painted from the window with the help of binoculars? If so, it was of objects rather than of people. Morandi would search out the mystery of life through the most mundane apparatus, inspecting the inanimate. By just moving one bottle of a group he would generate a newer mystery of perception. Sometimes the semblance of Calvino's world seems almost to descend to that of Monsieur Hulot, Jacques Tati's tragi-comic figure. But Morandi, while exploring predicaments, never drew on humour — a sense somehow completely alien to his make-up. 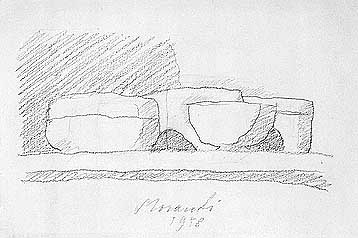 In Morandi's hermetic world each painting would take, on average, two months to complete. Such still life works as these comprise most of the fifty pieces on show at Tate Modern. As the newspaper La Repubblica says (21 May), ‘Morandi si unisce, quegli anni, solo ad altre solitudini; quella di Giacometti forse; forse quella di Rothko. Da Londra, una confirma era un pittore Europeo,’ — Morandi is being confirmed in Europe as a painter of world status. Yet Morandi only twice left Italy in achieving this pinnacle. Visiting Winterthur, north-east of Zurich, he paints a mysterious, surreal view; he cannot spend two months on this, but all the same, he encapsulates the mysterious presence of absence in such an alien landscape.

Morandi continues to puzzle and perplex us. This is why, at Tate Modern, after the confusion and distinct banality of 'Century City' the Tate is fortunate to be able to restore our sense of balance through Morandi's sublime, and to engender a genuine perception by the silent offerings of Italy's least explicable 20th century master. This is all the more important because Morandi stood for the non-metropolitan ethos; for smaller spatial experiences with qualities such as ‘Ordinariness and light’, which the English post-war architects Peter and the late Alison Smithson would seek to emulate. As early as the late l920s, those opposed to the radicalism of Novecento art in Italy sought refuge in rural backwaters, rather as the l980s English 'Ruralists' did. But in Morandi there was no nostalgia, which brings him into frame as a modernist, of sorts.

The Italian 'Strapaese' group of young writers revelled in the subterfuge of small worlds, and championed Morandi, which makes his work interesting again today as we flee globalisation. In other respects his apparent harmony with classical tendencies drew on the work of Piero della Francesca. More tellingly, Morandi's lifelong study of, and admiration for, the work of Cezanne is fully evident in the works on show at Tate Modern: it is with Cezanne and Chardin that he is most compared. Following involvement early in his career with Carra, de Chirico, Futurists and Metaphiscal Groups Morandi was enabled, by studying Cezanne, to break out on his own.

Even in the famous ‘Self-Portrait’ (l924) Morandi appears as an enigma, his face shaded by the hat, the light falling almost from a point directly above the painter. It was in the human perception of the man-made and its inexplicable translation into beauty that Morandi would continue, in these still-life works, to extend the optimism of the l920s. Even when he sought to deny individuality by grouping bottle objects together en masse, he was looking — however obliquely, however shaded — forward rather than back. This Tate exhibition now not only celebrates appropriately enough, Morandi's modernity, it also consolidates his international importance a generation after his death.