Magdalene Odundo: The Journey of Things

Magdalene Odundo: The Journey of Things 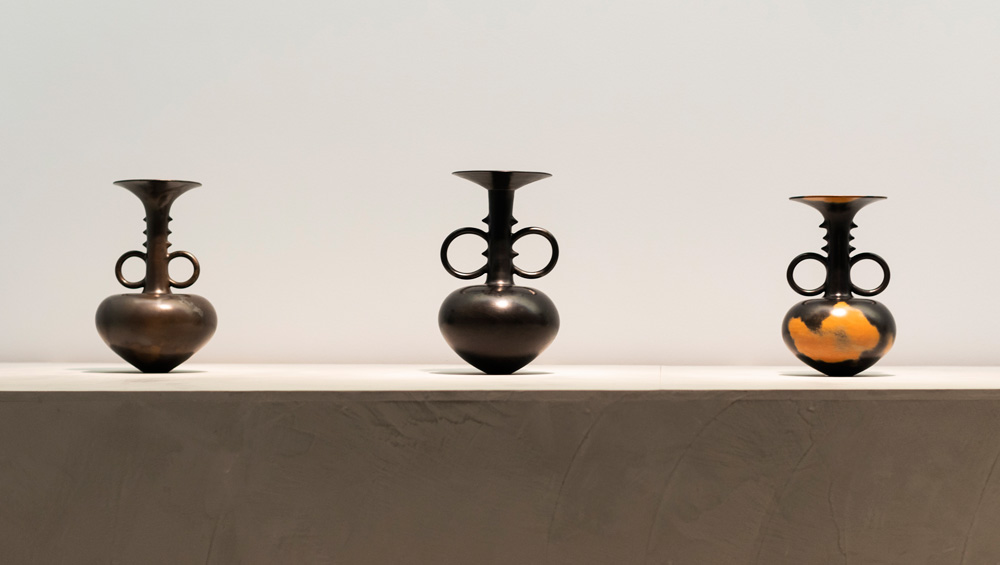 “Being interested in objects,” says the ceramicist Magdalene Odundo (b1950), “means being interested in human beings.” This mantra suffuses the oeuvre of the Kenya-born, Britain-based artist, which largely consists of gourd-bottomed, lustrously burnished terracotta vessels. It is also sometimes literalised in her pieces, which gracefully summon the spectre of the human form without ever quite imitating it. There are traces of nipples, hints of noses and intimations of headgear. Some pots have distended bellies like those of pregnant women. Several even have anthropomorphic names, such as Dark Vessel with Narrow Neck and Wide Rim. Beyond these echoes of the human body, Odundo’s pots have a genuine living presence, exuding personality even as they stand silent. Minute formal variants radically alter their personalities, which range from generous to prickly. “The pieces for me,” Odundo continues, “are about what it means to be human.” 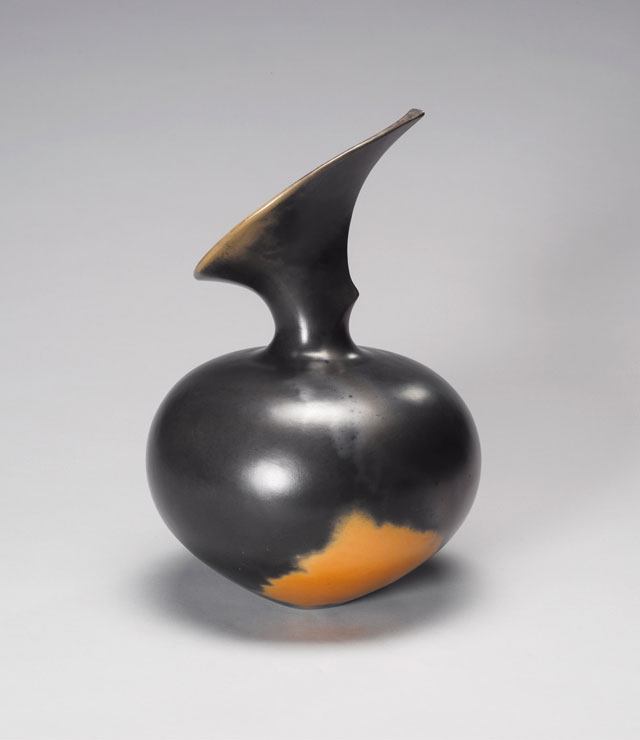 The Journey of Things, Odundo’s new exhibition at the Hepworth Wakefield, offers an anatomy of the diverse ways in which people shape objects and objects shape peoples. It evolved out of a plan to mount a more modest display of Odundo’s ceramics. During discussions with the artist, the museum’s curators became engrossed by the breadth and depth of her feeling for, and knowledge of, an enormous array of parallels and precedents. The Journey of Things positions more than 50 works of Odundo’s alongside about 100 objects and artworks from across place and time, each of which either serve as a direct influence or share thematic resonance with the ceramicist’s oeuvre. In this, the show also serves as a spiritual sequel to the Hepworth’s 2016 exhibition Disobedient Bodies, which saw the fashion designer JW Anderson combine garments with sculpture. 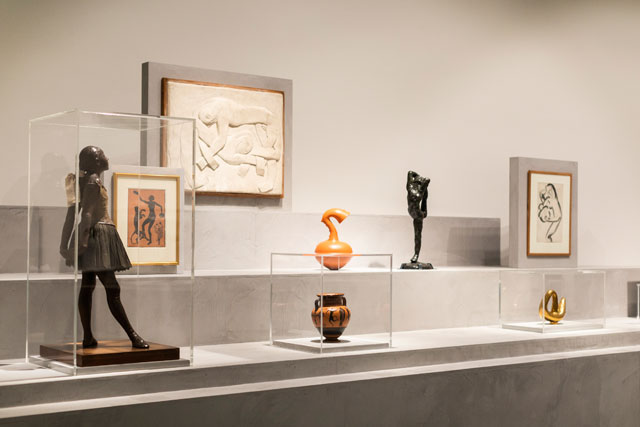 Largely drawn from the collections of Britain’s regional museums, the pieces Odundo has chosen encompass ancient artefacts from across the world, modernist artworks and studio ceramics, along with a handful of contemporary artworks. It is a bounteous, captivating selection. There is a gold alloy finial from the pre-Colombian Sinú people, four human- and animal-headed canopic jars and a beautifully carved wooden-and-metal pulley from mid-century West Africa. The very oldest items, such as an exquisite finger-sized Uruk standing figure, date back more than 3,000 years, while the newest, a vase of Odundo’s, was fired in 2017. Big names – Rodin and Degas, Picasso and Arp, Moore and Hepworth – jostle for attention with the unknown craftspeople of a dozen civilisations. More than just an exhibition, it can feel like a challenge to the hierarchical orderings of the museum.

It is aided in this by a superb design by the architect Farshid Moussavi, who has clustered the objects on several marbled, iceberg-like platforms, tiered to various levels, allowing for both the contemplation of individual exhibits and the complete consideration of entire sections. Some objects sit low and tempt you to peer within, while others – such as El Anatsui’s bedazzling BA (2014), a blanket composed of bottle tops with all the recesses and blemishes of fabric – curl off the wall. Odundo’s vessels provide the anchor and centrepiece for each display, connected to the surrounding artworks and artefacts as if by invisible dotted lines. Further groups of her ceramics are placed on islands at the room’s centre at eye level, inviting the beholder to converse. Unusually informative texts strike the right balance between explaining the collected items themselves and Odundo’s personal and creative relationship to them. 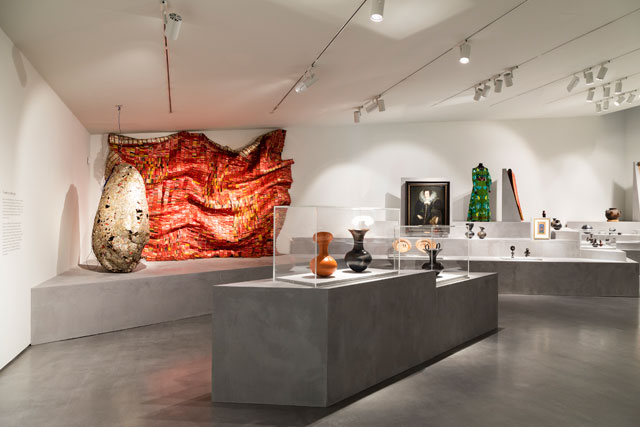 We begin at the beginning, with Odundo’s education. She was born in Nairobi, where she became one of the first women in Kenya to work in graphic design, moving in 1971 to England to do a foundation course at the Cambridge School of Art. For much of the next decade, she pursued further studies, going on to the West Surrey College of Art and Design in Farnham (now the University for the Creative Arts) and the Royal College of Art. She visited Bernard Leach, often regarded as the “father of British studio pottery,” in St Ives, before spending three months in Abuja, Nigeria, at the state-funded ceramics workshop of Leach’s former pupil Michael Cardew. The exhibition’s first section thus shows how successive mentors – Zoë Ellison in Cambridge, Henry Hammond in Farnham, and especially Cardew and Ladi Kwali in Abuja – shaped Odundo’s course. Her earliest work on display, an “esinasulo” water carrier (c1974-76) piece – bears the clear imprint of Kwali’s hand-coiled decoration, except muted and matte to her instructor’s glossy, mottled glaze.

Odundo discovered the frame of her mature work in the 80s and, with some detours into bronze and glass, has refined and extended these concerns since. Synthesising processes used in Abuja and Ancient Greece towards her own distinctive end, she works with a slip technique, whereby extremely fine particles of ground clay are applied to the surface of her terracotta pots before they are fired. This lends them an immaculate sheen. Those fired in an oxidised kiln burst out in an orange-red, those in a carbonising kiln yield a glossy black that seems to glow from within. Sometimes, these apparent certainties are disrupted with flame-like plumes of contrasting shades, in spectacular eruptions. They add up to a rich body of work, single-minded but subtly variegated. 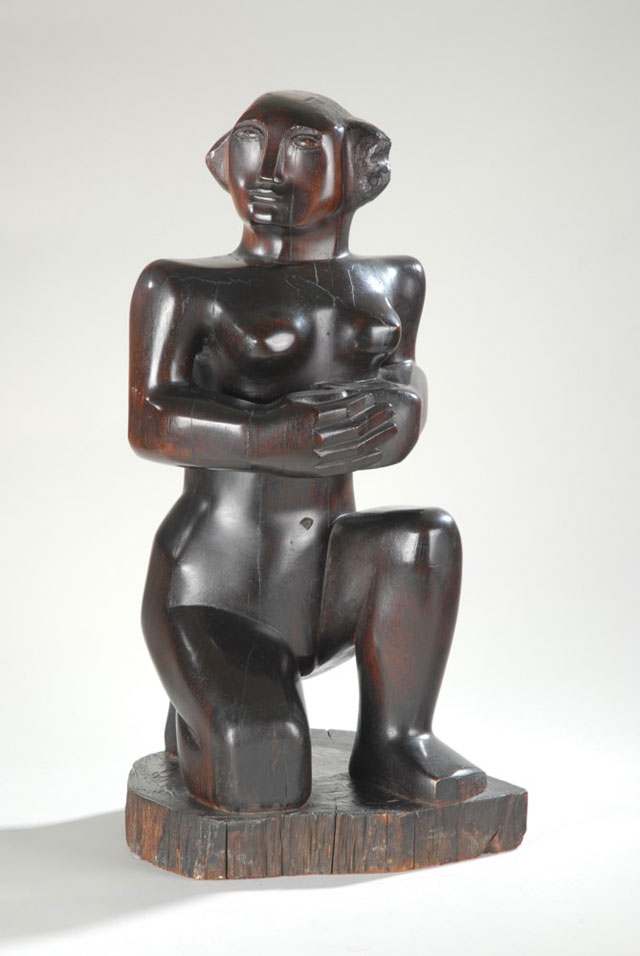 With Odundo’s apotheosis reached, The Journey of Things turns thematic, drawing out the various strands that intersect in the artist’s ceramics. One display takes in Odundo’s encounters with modernist sculpture – a genre that, as with a superb rosewood Kneeling Figure (1932) by Hepworth, repeatedly drew on non-western examples. By refolding these influences into her practice, Odundo arguably brings these influences full circle. There is a segment on the dichotomy of beauty and menace, as embodied by Odundo’s thorniest pieces, while another situates her alongside Giorgio Morandi, Cycladic carvings and the Australian potter Gwyn Hanssen Pigott as an exemplar of formal purity. Perhaps the most startling section, though, focuses on the ability of the static object to embody movement, cajoling examples as diverse as a Bernard Meadow’s Crab (1980) sculpture and Karl Blossfeldt’s botanical photography (1928). Seen in the light of these static yet kinetic works, the sinuous necks and rounded, precipitously balanced bases of Odundo’s ceramics gain a dancerly sprightliness. 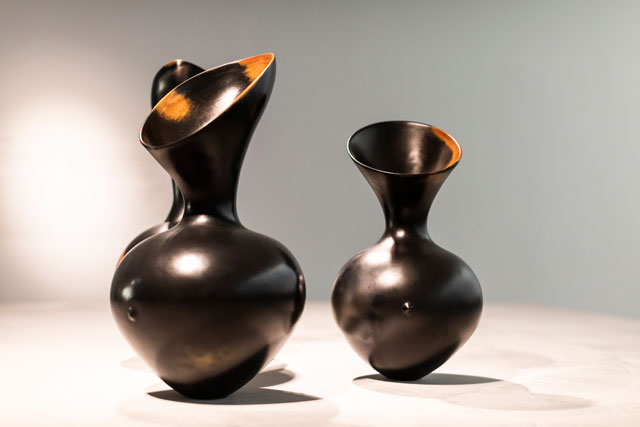 By opening out these different layers in Odundo’s works, The Journey of Things enriches their already-potent power. What might have been a motley assemblage of competing voices becomes a polyphonic choir, working harmoniously together to the same end. And Odundo’s clear feeling for the gathered objects pushes the viewer to consider and reconsider their functional and aesthetic value anew. There is nothing here that does not reward prolonged scrutiny. Odundo, Moussavi and the Hepworth’s curators have together created the sort of journey that you don’t want to come to an end.

• The Journey of Things will move to the Sainsbury Centre For Visual Arts, East Anglia University, Norwich, from 3 August to 15 December 2019. 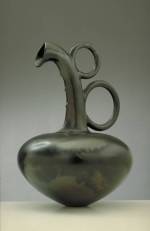 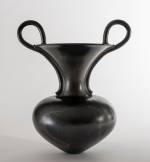 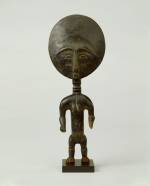 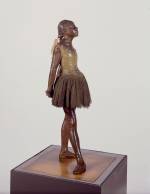