Radiating the heat and light of India, and expressing the artist’s love for the South Asian country, this vibrant exhibition brings Hodgkin’s “somewhere else” to the north of England 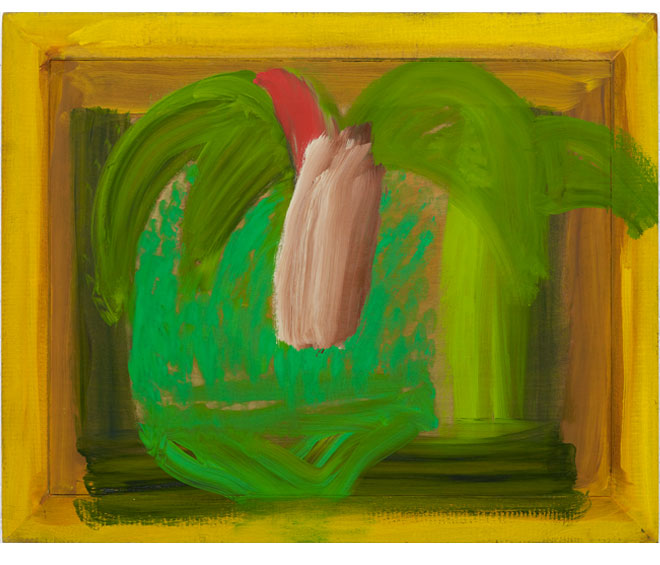 On a damp, grey British summer day, a dozen weary journalists are herded into a concrete building on the River Calder. The building is David Chipperfield’s prize-winning The Hepworth Wakefield. Inside the white-cube galleries, a riot of undiluted colours – reds, greens, yellows and blues – radiates heat and light from the walls, enough to revive even the least caffeinated of the troop. This is Howard Hodgkin: Painting India, an exhibition of approximately 35 works from the past 50 years, since the artist’s first visit to India in 1964, to his death at the age of 84 in March this year, two months after completing the final work on display here.

The young Hodgkin fell in love with Indian art while still at school, thanks to his art master, Wilfrid Blunt. He began collecting 17th-century Indian paintings, saying: “My collection has nothing to do with art history, it is entirely to do with the arbitrary inclinations of one person.” He nurtured a desire to visit the country, something he finally realised in 1964. “I didn’t know what I was looking for when I came, except that I was looking for somewhere else,” Hodgkin said, looking back, in a documentary made in 2015.1 From the outset, Hodgkin captured the intense mood of the south Asian country, his paintings sweeping the viewer up in a whirlwind of heat and colour. Mrs Sheth on the Terrace (1970-2) depicts (in as far as any of Hodgkin’s abstracted portraits can be said to truly depict) a lady who accompanied him on an early journey around India, taking with her an impressive array of extravagantly coloured saris. Hodgkin’s vibrant swirls wrap you up in silken folds, transporting you with them through the bazaars and lavish hotel foyers (Hodgkin didn’t stint on accommodation, regularly staying in places such as the Ritz).

Bombay Sunset (1972-3) observes the change in light on the wide open horizon, pixellating into small dabs, and framed by the blazing orange-red, which burns on to the retina of the inexperienced western tourist, used only to the pallid, watery sunsets of Europe. By comparison, View (Sunrise at Mahabalipuram) (1970-1) shows a gentler light washing in waves across the darkness of the disappearing night – and the dark three-sided frame. “The light is so beautiful,” Hodgkin wrote in his travel journal on 22 January 1975, “that all discouragement vanishes”. Looking at his paintings, this sentiment more than carries over.

Hodgkin returned to India annually after his first trip, absorbing the sights and sounds, smells and tastes, and taking everything back to his UK studio to immortalise in oil on board. The resultant paintings would often take a number of years to complete. While in India, he spent time with friends he made, including the artists Bhupen Khakhar and Jamini Roy. In In the Studio of Jamini Roy (1976-9), the daubed brush marks that feature so prominently in his later works, becoming key to his unique painterly vocabulary, begin to appear – again amid a flow of movement and colour. In Autumn in Bombay (2010-4), these strokes perfectly epitomise the falling auburn leaves.

By the mid-80s, Hodgkin was working with increasingly gestural brushstrokes, a stylistic shift that coincided with his adoption of the new quick-drying painting medium Liquin, allowing for the application of multiple layers in quick succession. He continued to paint on board, even reusing an old chopping board for Evening (1994-5), leaving the top of the board exposed, along with its many battle scars and incisions. This baring of the unpainted surface became more frequent as Hodgkin became more confident and the speed at which he painted increased. Nevertheless, a Hodgkin painting nearly always incorporates a painted frame, with the subject of the composition spilling outwards, towards the sublime, before being curtailed at the last minute, confined within an outer barrier of brushstrokes. Nicholas Serota, introducing Hodgkin’s first solo exhibition in India in 2015,2 speaks of Hodgkin as a stranger in a foreign country, adding: “Strangers have a way of capturing something that perhaps others cannot see.” Certainly there is a sense of looking in through a window, observing from the other side. In his journal entry, Hodgkin continues: “I feel like someone who has brought their harp to a party and no one has asked them to play.”

In 2012, however, Hodgkin began to paint in India itself, in a small studio high up above Mumbai, where he would spend up to seven months of the year. As his friend, the writer Bruce Chatwin, had noted some time previously: “The influence was now India herself, not the India of Indian painting.” In his most recent works, on show in the final room of the exhibition, one colour often suffices, whooshing around the board in broad strokes. Bombay Blues (2014-5), for example, captures that elusive seam where the sea meets the sky, while Hello, Bombay (2016) pays homage, once more, to the sun. There is an immediacy in these works not found in the earlier ones – and, significantly, the painted frames have disappeared. Hodgkin is no longer looking in through a window as a stranger – he is there, present, part of it all. The wall of this final white room is incised with a large window, looking out on to the disused mill, now a contemporary art space for The Hepworth Wakefield. The metaphorical window, it seems, has been reversed, and the viewer too has been absorbed into the artist’s Indian “somewhere else”, looking out on to the grey Wakefield day.

• The exhibition is accompanied by a catalogue of the same name, edited by the exhibition curator Eleanor Clayton, and published by Lund Humphries. Alongside high-quality reproductions of the paintings, capturing (and this is rare) the vibrancy of his colours, are essays and interviews with Hodgkin, and further selected extracts from his travel journals.

References
1. Film by Nick Aldridge and Gramafilm for Christie’s, on show in the exhibition
2. Ibid.