A Singular Artist Brings a Singular Work to South America

A Singular Artist Brings a Singular Work to South America

An interview with Anish Kapoor by Caroline Menezes

Born in Bombay (Mumbai), India, in 1954, sculptor Anish Kapoor has lived in London since his youth. Kapoor represented Great Britain at the 1990 Venice Biennale, was awarded the 1991 Turner Prize, and now is regarded as one of the most forward-looking artists in Britain. During the Seventies, the 52-year-old artist studied at the Chelsea School of Art. From the time of his debut in 1975 in the group exhibit Young Contemporaries, held at the Royal College of Art, Kapoor has drawn public attention in a range of exhibitions around the world. At the end of January 2007, he made his final stop on an acclaimed tour of Brazil, unveiling a public work called 'Ascension' in the Centro Cultural Banco do Brasil (CCBB) in São Paulo. The show, named for this work, is the first solo exhibit he has received in Latin America.

'Ascension' is a non-material sculpture formed by a column of smoke. Beyond this remarkable work, the exhibit also includes the film 'Wounds and Absent objects' (2003); two large sculptures, 'Pillar' (2003) and 'Untitled' (1998); a series of small sculptures called 'Echo'; and four installations.1

This interview began in the CCBB building and continued through the streets of the largest Brazilian city, São Paulo, up to the place where the work 'Ascension' was shown. Here, Kapoor explains the singularity of 'Ascension,' comments on how a post-colonial heritage impacts the way in which a work is created and received; reflects on changing notions of 'exotic' and 'foreign'; and discusses his regard for Barnett Newman.

CM: Initially, 'Ascension' was built in the central foyer of an imposing building, the Rio de Janeiro CCBB. Now, the work will be shown in the middle of the street under the Viaduto do Chá (Chá Viaduct). How does viewing the work differ in these different contexts? Do you think that this displacement reveals more about the work?

AK: In Rio, it was built in a very spectacular, big space. It was very strong. In São Paulo, I have a feeling that it is a different work. To see 'Ascension,' you enter in a construction and, firstly, you have to walk through these very long corridors. It is not 36 metres as it was in Rio, it is only eight metres. The whole thing is quite a real thing. In this age, when we have so much and still there are millions of people who have nothing, I am really interested whether art could be without sentimentality; how art can really engage in those problems. My feeling is that it must be able to, because I believe it deals with human poetry. First of all, 'Ascension' is an object made from a non-object. For many years, I have been trying to deal with the idea of a sculpture as a non-material object. And this thing happens in front of you. We can understand the poetics of that; a fog, a kind of circular motion that grows.

CM: Do you think about these issues while you are working, or do you create from a particular perception?

AK: The history of a sculpture is the history of a material; the clay to the bronze to the stone. I have always thought that every material has a non-material parallel. That is where my interest is aroused in a work like that: How can I make an object from something that does not exist? Smoke is simply the projection of the air in a room. So you can see that the smoke gives a form.

CM: 'Ascension' deals with a religious tradition. You came from a Jewish and Buddhist heritage.

AK: I am interested in mystic ideas. When Moses led the people through the desert, they found a column of air. In a way, it is just history. But it is that process that makes a good work; just a simple, stupid phenomenon, air or smoke in cyclic movements, making a column and offering multiple possibilities of meanings. We cannot deal with no meaning. I once made a work that was a very dark black hole in the ground. It was essentially nothing. I can say it is another non-object. It immediately suggests meanings as 'the beginning', 'the ending', God, death, fear, all because it is so dark, so deep. And it was just a hole. So, I think there's a psychological and mythological, a poetic background. We have to deal with whatever our history tells us to deal with. It is one of the tools art works with, and I am really interested in that kind of dynamic relation between myth and meaning because it is such a powerful tool.

CM: What was it like for an international artist to participate in a Latin American curatorial project? Sometimes, it seems easier to deal with the questions raised by post-colonial heritage when you come from the East. After all, there is a vast field of intellectual thought and a tradition of observation in the East. Perhaps it is not the same when you come from a Latin country.

AK: The post-colonial condition, the idea of a kind of political and psychological domination, is also true in New York and it is not different here [in South America]. Our relationship to this is changing. What I mean is that an artist, let's say the American Robert Gorbe, can be considered also exotic and, in the same way, the Brazilian Cildo Meireles or myself can be considered, too. We all have different kinds of exoticism. Maybe 20 years ago it was not true. And it is not to say that there is a particular Latin American history. The atmosphere, the felling of the work may be specific to the country, but the group of intellectual subjects is the same.

CM: Recently, you made a comment about the scale in Barnett Newman's work. In a new display at the Tate Modern collection, there is a large sculpture of yours in front of a painting by Newman. How do the works relate, and how do you see this curatorial tactic?

AK: Barnett Newman is my great hero. I think he is the greatest artist of the 20th century, more important than Duchamp. That work it is called 'Ishi's Light' (2003). Ishi is my son. Barnett Newman made a work late in his career called 'Anna's Light' (1968). Anna was his daughter. So, this is the easiest connection. Newman's paintings are a kind of mark of 'space' and 'scale'. 'Ishi's Light' makes a column because of the reflection made from the light from beyond the painting. It is the light of Barnett Newman. And I am very happy they are both in the same room. 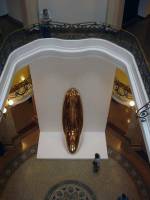 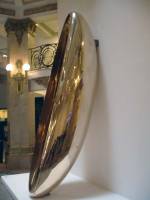 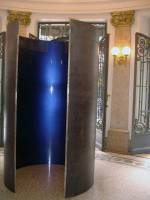