Much has been said about the work of Anish Kapoor and his trajectory has made him one of the most important sculptors working today. Kapoor, who works incessantly, always finds a way to overwhelm the public. This time he has created one of the most powerful artworks ever exhibited at the Grand Palais in Paris. Under the name of the biblical beast Leviathan, Kapoor has devised a giant inflated structure inside the neoclassical and art nouveau building

The whole piece invades, almost entirely, the 13,500 square metre nave of the Grand Palais, which was originally built for the Universal Exposition of 1900. Firstly, the visitor is invited to enter the interior of the work where it feels like being inside a living organism – a tiny intruder in an animal’s body. The material chosen to create the molecular shape, a special polyvinyl (PVC), provides a transparency that illuminates the inner part with an intense bright red. From this point, the viewer can already observe the complete integration between Kapoor’s Leviathan and the 19th-century architectural style. The sunlight that penetrates through the iron, steel and glass roof of the Grand Palais produces “tattoos” on the Leviathan’s “skin”. The entanglement of shadows results in lines, geometric forms and grids: drawings created by the relation between the work of art and its environment. The shadows’ dance becomes more playful with the passing of time and the changing sunlight, and the metamorphosis of the images can be perceived as if the membrane which covers the space were in movement or perhaps really alive.

Leaving the interior of the work, the visitors arrive at the vast nave of the Grand Palais. From the outside, the creation (or creature) imagined by Kapoor induces the viewer to a totally different experience. There, one discovers that the vinyl has an earthy-ochre monochromatic colour and is bigger than it seemed to be from the inside. Leviathan is composed of four connected ellipses that stand 35 metres high. The contrast with the building generates tension on the perception. The primary thought is how did it get in there? Actually, the whole production of this artwork, made especially for this exhibition, took about two years. Kapoor utilised new industrial technologies to create Leviathan. Once in its Parisian home, the immense vinyl outer membrane was inflated with air: there is nothing else supporting the structure. Although it could be seen as fragile and light, it appears solid and heavy. The fusion of the futuristic and organic design with the delicate lines that adorn the Grand Palais fascinates the sight and also the other senses, particularly if we consider the experience of the human body within the space, in this case a mythical scenario. To witness such a quiet and unique creature (or creation) in its glass and iron cage provokes thoughts about our condition as vulnerable beings that should perhaps be alert against an imminent danger that may just be in a deep sleep.

The exhibition, which has already received more than 200,000 visitors, is part of the Monumenta project that transforms the canonical Grand Palais into a space for experimental desire. The initiative began in 2007 with the deconstructive sculptures and paintings of the German artist Anselm Kiefer, who envisaged a decadent atmosphere with ruin-like artworks that aroused deep reflections on humanity and loss. The following year was the chance of the American Richard Serra who, with his minimalist approach, placed large-scale sheets of metal in the exhibition. In 2010, it was the French artist Christian Boltanski who forged an installation that combined sounds and memories represented by mountains of clothes. This year the challenge was given to this Indian-born British artist who conceived the apocalyptical monster Leviathan in the heart of Paris. Poetically playing with a pre-modern design and ancient myths, Kapoor has once again proved that his artistic endeavour is key to understanding the path that sculpture in taking in the 21st century. 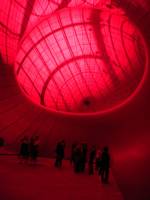 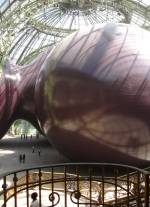 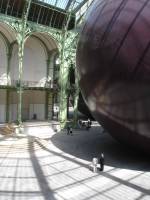