Berthe Morisot: An Impressionist and Her Circle

Berthe Morisot: An Impressionist and Her Circle

Berthe Morisot was the first woman to join the circle of Impressionist painters and it is through focus upon this painter that the exhibition presents more than 75 paintings and drawings from the Impressionist movement, including Edgar Degas, Claude Monet, Edouard Manet, Odilon Redon and Pierre-Auguste Renoir, as well as Morisot, who is as recognised and celebrated with affection in France, even if she is less well known than her male contemporaries elsewhere. And, although she takes the title of the exhibition, Morisot remains a subtle presence in a serene ambience, with paintings of children, flowers and a room with a view. Her paintings express feminine quietude and soft contentment, borne not of subservience within her circle of male friends and painters, but of mutual respect and understanding, a harmony enriched by differences in gender and not antagonised. 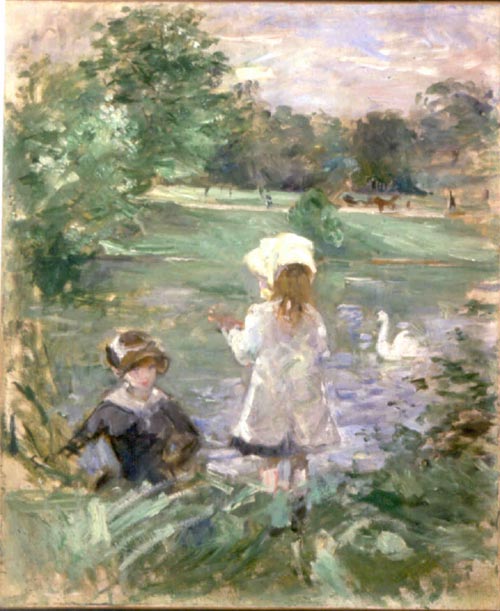 Born in Bourges, France in 1841, Morisot was the daughter of a successful civil servant. Her family moved to Paris in 1852 where she soon revealed her extraordinary painting and drawing talent as a young girl. She copied masterpieces in the Louvre and painted from nature. She first exhibited her paintings at the official salon in 1864 and continued to show her pictures in the annual Salons until 1873.

In 1868, Berthe Morisot met Edouard Manet and they began a lifelong friendship. Manet painted Morisot 14 times. She learnt much from Manet, although she never formally studied with him. In 1874, Degas invited her to exhibit with a group of independent artists, among them Claude Monet, Renoir and Camille Pissarro - imminently the infamous Impressionists. Degas especially approved of Morisot's canvases, the loose brushstrokes, unfinished backgrounds and light-infused colours, which he said epitomised the Impressionists' aims. Morisot continued to exhibit with them until their last exhibition in 1886.

Morisot married Eugene Manet - Edouard's brother - in December 1874, when she was 33. She defied convention by continuing her career after the marriage and keeping her maiden name professionally. Her daughter - Julie Manet - was born in 1878 and became Morisot's favourite muse, and later her art student and painting companion. Morisot's first solo exhibition in 1892 was received with great acclaim, and, sadly, turned out to be her last, as she died three years later, at the age of 54, from pneumonia.

Although a modest character that did not crave fame and alluded controversy, Morisot, nonetheless, stayed firm to her loyalty and support of the Impressionists. To see her paintings exhibited with those of the Impressionists is to understand the ethereal nature of their friendship and to recognise the ambience so apparent in the paintings of Monet and Manet, as the result of a movement of lunch parties and picnics with the modest intelligentsia rather than the singular career of controversy and rebellion against the Salon.

With the focus of the exhibition on the feminine presence of Morisot, it makes apparent the delicacy of the other works and signifies the inspiration of graceful women and pretty children. Morisot's spirit inspired the famous ambience of the Impressionists, and for once, the muse is not so concealed in plays of light. For a moment, the gaze turns to Morisot, sitting gracefully in the background with a lightness of being that implicitly enriched the paintings of her friends, as light on the water. To see 'An Impressionist and her Circle' is to realise the feminine wholeness of the movement, men in the presence of women, and the place of human relationship in art. To see Impressionism without Berthe Morisot and the wider entourage of women and children is to see only an impression of an impression, unrefined by feminine charm.