The great 18th-century caricaturist, William Hogarth, who signed himself 'Britophil', caught the mood with flattering - if double-edged - national stereotypes. People loved his beer-swilling, roast-beef-guzzling, four-square Englishmen, the 'dread and envy' of starveling, bare-foot, onion-nibbling French peasants, oppressed by lecherous Jesuits and mincing courtiers. The English abroad saw the Continent through such prejudices: all was terrible as objects of misery, all was poverty and superstition, vainglory and tyranny. 'I think nothing so terrible as objects of misery', confided Lady Mary Wortley Montagu, travelling through northern France in 1718, 'and all the country villages of France shew nothing else'.

In this way, the great historian, Roy Porter, caught the essence of Hogarth's impact in a nutshell. What would he have made of the fact that today, William Hogarth is, at last, the subject (albeit with Rembrandt) of a major exhibition at the Louvre (moving back to its more natural home in February at Tate Britain)? In fact, this is the first exhibition of the work of William Hogarth ever to be mounted in France. This might be taken as an example of the cultural benefits brought about by the entry of Britain to the EU. But either way, it is a significant mark of the growing prestige of Hogarth, not just within the English-speaking world but globally.

The term 'Hogarthian' is now enshrined in the English language, and it is easy to understand its meaning once one has seen his paintings. The French word 'Rabelaisian', taken from an earlier century's coarse and humorous writing, bears little of the strength of the former. William Hogarth's comely mansion is still visible, with its brick façade appearing full-frontal as one drives westward towards Heathrow along the M4 approach at Chiswick. Garrick wrote the epitaph on Hogarth's tomb in Chiswick churchyard. In 18th-century London, there could scarcely have been a greater honour. Hogarth stood as a symbol of English xenophobia to all things Continental, but he always laced it with wit, which is why his work was so broadly popular. He also caught the mood in England of a new salacious but exuberant form of the novel, for example, Fielding's work Tom Jones, which is better than Rabelaisian in its thrust.

At the Louvre (until 8 January 2007) some 120 Hogarth works vie with 64 Rembrandts (the French must surely have discovered the latter if not the former). Awareness of Hogarth would prompt in French sensibilities an understanding, however reluctant, that the Enlightenment process, of which revolutionary France became so self-consciously proud, actually has its roots in England (and dare one say it, Scotland). Professor Frederic Ogee, Co-curator, has done European culture a major favour by opening up a debate about the origins of this classic European movement, from which sprang the establishment of the American Constitution. And France, being France, will not be too worried about the chauvinism from the 'Rosbif', as the English were dubbed at this time, but will revel in their enjoyment of Hogarth fundamentally as a painter, a great colourist and a creator of literally 'choreographed' scenarios.

After all, Hogarth, like any talented British painter, was doing his best to establish his credentials as a European painter of stature among equals. By choosing subjects of modern morals, such as 'A Harlot's Progress' (popular in the Louvre right now) and 'A Rake's Progress', he moved the goalposts firmly across the channel. The six paintings from the series 'Marriage à la mode' as it was titled, stand as Hogarth's masterpiece. A set of engravings based on the paintings was executed in 1745 and these were offered for sale by Hogarth in 1752. The series was also entitled 'A Variety of Modern Occurrences in High-Life' and parodied an arranged marriage between the son of a nobleman and the daughter of a bourgeois in all its preposterous stages. Here, Hogarth was seen as a redoubtable but sceptical Modernist.

He also defined his epoch better than any other artist. He was the true founder of caricature, expressed with masterly skill. The painting, 'O The Roast Beef of Old England', was really his own personal revenge against the French for arresting him in 1747 on false pretences, deeming him to be a spy, while he was innocently waiting for a ferry at Calais. The painting is set with a background of the massive, rather ugly entry gate to Calais. It shows the 'rosbif' of great mass being carried to English tourists past motley French soldiers, a salacious monk and a moping, onion-sucking Jacobite mercenary: the Scots and Irish are lumped with the French (this only three years after the Jacobite rebellion in Scotland). Hogarth was hauled off to the town jail. This is hardly a likely favourite for the Louvre, but it does reveal the depths of enmity and Hogarth's great satirical skill.

British audiences will be able to give Hogarth an easier ride when the show opens at Tate Britain in early February 2007. 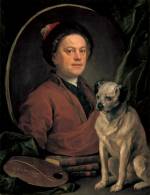