The Tao of Now

The Tao of Now

A New York don’t-miss event, this show is revolutionary. Though not exactly groundbreaking – the Museum of Modern Art’s 2008 Design and the Elastic Mind also explored technological innovation from the pivotal year of 2005, when the shift between rapid prototyping and 3D printing seems to have occurred – this presentation, as curated in-house by Ronald Labaco, is the first to focus on art as matter.

Spread out over three floors, with 85 contributors, Out of Hand is not a show you can run through. Indeed, the best way to approach it is to go through it twice. The first time for sheer delight, like a kid at a magic show, to marvel at liquid plastic spun out like salt-water taffy, a virtual vase created with sound, bracelets fashioned from a wave of your hand, desert sand layered into ceramic bowls and a printed road vehicle that weighs just 29lb. The second time to ponder the implications of programmed process versus brain-to-hand creativity, of the internet’s “computer-assisted” collaborations (so turn of the century!) versus the 3D printer’s “computer-generated” tao of now.

Those over 40 won’t have much trouble with the furnishings, fashion, lighting and architecture. Several of the designers on display are well known (Ron Arad, Anish Kapoor, Maya Lin, Marc Newson, Greg Lynn, Alan McCollum, Hiroshi Sugimoto), and most of them combine the new techniques with traditional practices. Many of the visuals are recognisable as well; the materials include wood, silver, bronze and plastic, and we are accustomed to repeating geometries of fractals, for example, through the ancient mathematics that drove Islamic design. Familiar, too, at first glance, is the initial digital process long since harnessed by architects and sculptors such as Frank Gehry and Alice Aycock to enable structures that only those with a background in engineering would know could not have been torqued manually or mechanically. And whoever wrote the breathless caption for the seamless bodysuit that SOMARTA computer-knitted for Lady Gaga has never knitted a scarf for a college sweetheart on round needles.

The lesson taught here is, literally, more elementary – an introductory course to a parallel universe that looks, feels and, on occasion, operates like the world of crafted objects we were brought up with, but that is constructed from the inside out and ground up, not bit by byte but element by element, from programmed particles.

On the introductory second floor, designers-in-residence engage the 3D printing technology developed by Shapeways and laid out for visitors in a promotional video that is unfortunate, but not fatal. The effort involved is deceptively simple – a program tossed off in a couple of hours may have taken years to gestate. The end product is not proprietary; sharing is big in this community, though the end results are so elaborate as to generally remain unique by virtue of the impossibility of replicating all the steps. Programming spin-offs of spin-offs, these self-designated creators of inorganic forms play on their laptops as in a sandbox; however, the exercise is not quixotic. The endgame is practicality, speed and universality: a tapestry can be woven in a day, traditional laws of production can be disrespected to create new proportions, materials and centres of gravity. Wertel Oberfell and Matthias Barr’s fractal table built of resin can be printed to any dimension, Michael Hansmeyer’s Subdivided Column built of 2,700 sheets of laser-cut board can be produced in an edition of 10,000. Though some of the projects are still being worked out – 3D printed human organs that function and houses spewed from concrete in a day are a few years away – as with any contemplation of endless possibility, the wow factor of this revolutionary new language is ever-present. The captioned descriptions veer from quotidian to quirky. Whereas objects built up from the powder of their materials might adapt the lost wax process, glazing, firing or hand-polishing, the objects that push the boundaries of “bigger, smaller, stranger” engage a nano-age vocabulary of laser sintering, elastomer nylon, contour algorithms and processuality. Judging by the visitors’ absorption with the interactive installations and objects made to handle, their meaning is not obscure.

What gets lost in the translation is the art. Take the head-to-toe mutant likeness of the artist Richard Dupont. Rendered in resin with data scanned from his body and modelled through a digital program, it calls into question the very idea of self-portrait. Bearing no relationship to Rembrandt’s searing investigations into inner life, or to Van Gogh’s piercing gaze on to incipient madness, this smooth autobiomorph is self-image as product. Far from a brush laid on canvas or a hand-held chisel meeting marble, the fabrication processes producing these designated artworks involve digital milling, rapid prototyping, audience participation and rebooting. Even a “selfie” has more soul. Although you could argue that a Ghiberti or a Bernini set their hands only to figures already carved out by assistants, those entrusted with such work were artists in their own right, many accruing their own fame.

These are early days, of course, as artists are still pushing the boundaries and learning to control a technology that can take off on tangents, like a runaway horse with the bit between its teeth. Frank Stella’s 3D resin and stainless steel sculptures pull the crisp vocabulary of his 2D wall pieces into the tangled mess of unsorted laundry. Marc Fornes’s body armour/dancers pieced from interlocked parts don’t outperform the Lego figures that loom down the street at the FAO Schwartz toy store. That Wim Delvoye can now add a twist to the complexity of his machines adds nothing at all. And what point is Marc Newson’s Doudou necklace fashioned digitally from more than 2,000 precious stones if it is outshone by the least of the costume jewellery masterpieces exhibited in a concurrent exhibition on the second floor?

Aesthetics rarely enter into it. The polyurethane sofa computer-numerical-control-milled from the brain waves of artist Lucas Maassen as he thought of the word “comfort” repels seating, the Breast Cancer Project’s bronze jewellery scanned from cancerous tumours log too-much-information and Roxy Paine’s spewing maroon gobs of plastic are carnival amusements in comparison with his haunting silver winter trees of yesteryear.

Is this our future? What is missing here? The technology, materials and programming are flawless: computer-printed product is miraculous. The problem, it may be, resides in the viewer – well, more narrowly, in me. Too many of these remarkable exhibits elicit an appreciation that stops short of emotion, as when my prevailing reaction to Softkill Design’s elaborate prototype for a 3D printed house, which uses an algorithm that imitates bone growth, was how much dust it will gather. The deepest concern with digital, as I see it, is one of love – love as deep feeling; the love that 5,000 years of civilisation have defined as inseparable from art. Can a digitally produced product be art? Can one love a robot? Is there not the same expectation of a great work of art as of a flower – its temporality, its beauty, its uniqueness and our wonder at its creation? Functional objects call less on magical thinking and, although The Museum of Arts and Design’s laudable and justified overriding mission is to break down the distinction between art and design, it seems to reassert itself forcefully here. I am aware, though, that this hair-splitting may be generational. Already there are films portraying convincing love affairs with an avatar, so it is quite possible that in 10 years from now, set on laser-printed plinths, Bernini’s marble bust of Urban Vlll, Jeff Koons’s marble bust of himself and Barry X Ball’s computer-milled calcite bust will hold their own together in the history of art. 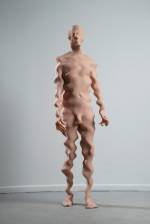 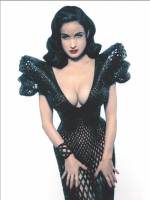 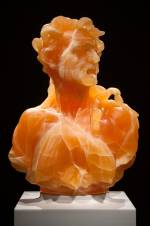 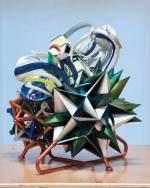 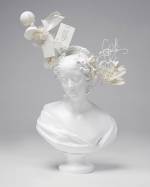 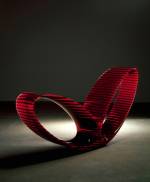