Sculptor Richard Deacon has selected works by more than 30 artists spanning the last 105 years to reveal how abstract drawing can be viewed and understood. He does not attempt a universal or exhaustive survey, but one that identifies the “various strands of abstract drawing – inscriptive, calligraphic, ornamental, generative, individuating and identifying”.

Abstract Drawing coincides with a major retrospective exhibition of his work as a sculptor, at Tate Britain (5 February – 27 April 2014). There, his early drawing It’s Orpheus When There’s Singing ♯7  (1978-79), inspired by Rilke’s Sonnets to Orpheus, indicates his affinity with drawing; it is a structurally cohesive work made up of beautiful curved forms, that appears to achieve an airborne place. Numerous of his scultures could, in recent drawing research parlance, be referred to as spatial drawings. Deacon’s choice of works for the Drawing Room’s exhibition Abstract Drawing reflects a sure eye, a learned individual devoted to making as an activity. His is a superb choice of work, resonating as it does with the subtle power of an art form that is very often an art of absence; of whisper rather than declaration; of suggestion rather than certitude; an art of beauty and of pleasure. It is not an art of dialogue, nor a kind of speech about other things.

This is a personal choice of artist’s drawing by Deacon and takes as a starting point the early-20th-century spiritual notebooks of Swedish artist Hilma af Klint, and a tiny suprematist drawing by Kazimir Malevich to a 1951 piece by Jackson Pollock. Pollock’s drawing is the consequence of drawing on porous mulberry paper reaching on to the sheet below. The fuzzy-edged blots were then worked on with white gouache. From the 60s, works include those by Eva Hesse, Mira Schendel, Dom Sylvester Houédard (well known for his concrete poetry), and Frederick Hammersley (the American artist who pioneered computer drawings).  From the 70s, there are two works on paper by Sol LeWitt, whose contribution to abstract and conceptual art has had a profound influence on artists and ideas in drawing. There are works by Indian modernist Nasreen Mohamedi, and Romanian artist Victor Caito. From the 80s, Deacon has included the rarely seen drawings in relief by Anish Kapoor and pastel works by artist and historian John Golding whose Paths to the Absolute (2000) is a key text on abstract art. Golding creates nuance in the surface texture, the works made up of endless, soft tonal lines, scratches, taps and marks that evoke sounds. There are hints of shapes, reminiscent of the exquisite surfaces of Monet. They form veils over the picture plane, the graphic marks creating a dynamic suspense. His works are made with intense concentration, which in turn invites an act of intense contemplation.

It is possible to imagine a time “when oil painting or video art did not exist”; but drawing has always existed. Barnett Newman claimed that the first man to make art did so with a stick in the earth, and that “drawing was the most direct and unmediated method of catching the creative process as it happened”.1 The process was epitomised by the act of drawing in a more immediate way than any other expression of art. The expansion of the field of sculpture within minimalism, land art and installation led to an increase in drawing of the diagrammatic aspects of making sculpture, and the concept of 3D, requiring a range of drawing processes. The sculptor Richard Serra, whose drawings are also on display here, famously said: “There is no way to make a drawing – there is only drawing.” In the same interview he stated: “Anything you can project as expressive in terms of drawing – ideas, metaphors, emotions, language structures – results from the act of drawing.” For Serra and many artists of his generation: “Drawing is a verb.”3 Serra has played a key role in the redefinition of drawing in present global culture.

In the late 60s and early 70s, the materiality of the art object was fundamentally reassessed. Drawing represented a private and curiously unfettered position compared with painting or sculpture, which had always possessed a more public position. Yet at the same time “drawings”, in conceptual terms, could leave the page, and leave behind their status of preparatory study or sketch, and walk in to the landscape. The work of the English artist Richard Long is an example of how these views have been developed. If Paul Klee famously “took a line for a walk” on paper, conceptual or land artists in the 70s took drawing for a walk in to the wider world.

Drawing is the process that artists choose when they need to work through and resolve ideas. Drawing is a physical adventure and sometimes a mantra that constantly defines self, and one’s relationship to the wider world. Yet drawing remains unique, in the very immediate way it conveys thought or impulse. It continues to be elusive because the majority of drawings are not shown, published or exhibited, but stay in artists’ studios or stored in plan chests in museums. A survey exhibition of drawing is always slightly intriguing for the mysteries of an artist’s working method that it might reveal.

Another British sculptor, Antony Gormley, suggests that drawing might have a clearer place in the working method and intellectual processes of a sculptor than a painter. He says: “The process of drawing helps the sculptor to synthesise their ideas and feelings; they are in control and contact with the material, which they can modify, correct or discard in a moment. And it offers the freedom to experiment.”3

In many of the fine works on show, silence is evoked, yet so are the “sounds” of colour and line. The immediate effect of compositions such as that by Suga: Accumulation of Critical Boundaries (1987) or Messenger, Ruled Black on Grey (2013) can be of complexity and loss, yet these feelings give way to a more uplifting experience as the eye roams about the beautifully crafted surface. References to exciting sensations, moments, experiences, are discernible in the often exquisitely woven surfaces.

The book to accompany the exhibition, Abstract Drawing by Deacon, with essays by him, Dawn Ades and Anna Lovatt, makes an important contribution to the reasearch in the field of drawing taking place. Ridinghouse has produced a well-designed accessible publication, an important aide-memoire to a fine show. 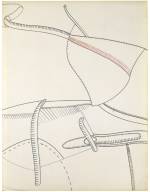 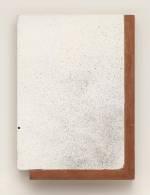