Sol LeWitt was a major leader of Conceptual art, which was initially called Minimalism. Critic Barbara Reise contributed a seminal article to Studio International, clarifying that LeWitt was a Conceptualist, which he stated himself.

The death of the renowned artist Sol LeWitt on 8 April, at the age of 78, comes well after those of his contemporaries, Don Judd, Dan Flavin and Carl André. He was first known as a Minimalist. The heyday for this loose conformation of American artists was in the late l960s and early l970s. However, for those still seeking to work out if LeWitt was a Minimalist or a Conceptualist, there was in Studio International (April 1969; 177: 910) the gift of Barbara Reise's trailblazing article Untitled l969: A Footnote on Art and Minimal Stylehood. Here Reise argued formidably against the actual term, 'Minimal Art'. She rightly traced the term back some four years to Richard Wollheim in Arts Magazine, January l965. This last was to create confusion, even discrediting the genre. Reise had, in fact, been asked by Studio International to review the exhibition, 'Minimal Art' mounted at the Gemeentemuseum, The Hague in 1969 by Curator Enno Develing. Reise set out to correct the basic misconceptions, which had proliferated by then over the term. Develing, for his part, made a spirited attempt with the work of ten invited artists, each of whom submitted five works for the show.

Sol LeWitt was one of these ten. Reise found his work seemed less material even than Flavin's:

Not because his materials are less solid than light, but because his conceptual content dominates its sensuous expression in matter. Lewitt actively de-emphasises the three dimensional tactile properties of his materials.1

From early in his career he has neutralised the materiality of solids by white paint or enamel … Recently he has taken the further step of virtually denying an independent object existence to his work by drawing directly onto a gallery's white wall in pencil.1

Taking a square (which is the most flexible anonymous unit and a plastic 'construct' in and of itself), LeWitt puts its rectilinear and numbered properties through such convolutions that it is virtually impossible to comprehend the whole of his thoughts at any one time. Even with one of his clearly articulated 'keys', one gets lost. For the more one follows his logic the more abstracted is one's experience from everyday perceptions; and the experience of losing oneself in such an irrationally followed logical system is essentially mystic.1

She quoted LeWitt's own words, from Art-Language No 1, March l969: 'Conceptual artists are mystics rather than rationalists. They leap to conclusions that logic cannot reach.'2 Reise claimed here that:

LeWitt's mysticism, unlike Bernini's or Mondrian's, is not representational or related to religion or nature. It is secular, with a syntax related to computerised mathematics. Like Flavin's light material qua material, Andre's place qua place, Judd's material qua material, and Morris's form qua form, it is mysticism qua mysticism: cultureless, non-referential and artistic in context and content.1

LeWitt was, therefore, categorically defined as a Conceptual artist. Reise's article released a storm of confused disagreement. Two issues later,Studio International published a letter from the curator at the Gemeentemuseum, which accused Reise of failing to understand that LeWitt's mysticism, like that of Mondrian, was nothing of the kind:

[LeWitt's] series of open and closed volumes merely illustrate the ambiguity of visual perception and demonstrate the great number of possibilities and varieties of an at first sight very simple quantity of plain information. If this factual information appears to be 'mystical' to the critic, then this has everything to do with his or her personal experience of reality and nothing with the artist he or she is talking about.

Enno Develing was perhaps the one confused not LeWitt, in his clarity of statement, or Barbara Reise, in her scholarly appraisal of the work. In fact, the editors were fortunate to be able to print in the correspondence column of the same issue, Reise's own conscientious revision of one small point concerning the 'completeness', and therefore the authenticity, of LeWitt's serial ordering in his work.

We produce here (to as good resolution as possible) the item by Sol LeWitt from page 189 of the first issue of Studio International, mentioned: 'Drawing Series l968 (Fours)'. The clarity and purity of LeWitt's subsequent three-dimensional work, 'Two Open Modular Cubes/Half Off' (1972), which is now in the Tate collection, substantiates perhaps Reise's 'mysticism', recognised by LeWitt himself and astutely by Reise.

By then lesser critics had been guided in their understanding by Reise. LeWitt for his part pursued a consistently sound development of his ideas, exploring colour again, and never far in his mind from Hartford, Connecticut, where he was born. He made substantial loans from his collection of his contemporaries' works to the Wadsworth Atheneum Museum of Art in Hartford, where he had received drawing lessons as a child. He supported younger artists whenever he could. An experiment took him to Italy in the l980s, but he was to return to the USA and settle in Chester, Connecticut for his remaining years. His parents had been Russian émigrés, and he maintained in his mind the rigour of artists such as Tatlin, and the Constructivists. 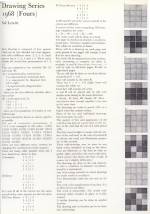