The Indian artist, brought up in a family of goldsmiths, adapts age-old techniques to make work that seems to bear witness and testimony to this family history and its artistic tradition 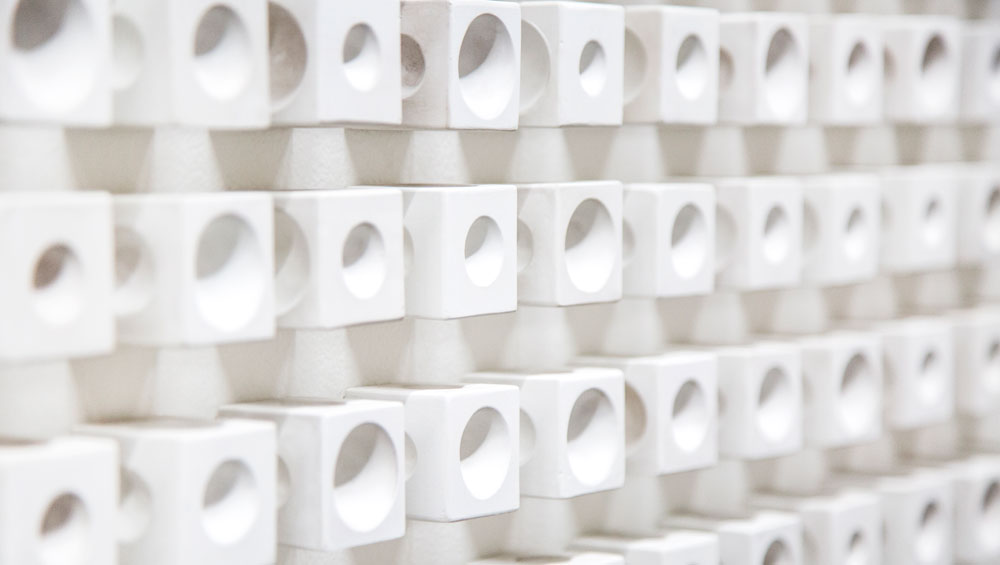 Prabhavathi Meppayil’s studio is located on Avenue Road in Bangalore, a neighbourhood that retains a trace of its decorous past – generations-old businesses fill the small offices and stores that make up a fabric of tightly wound streets. Home to scrap dealers, bookkeepers, weavers and goldsmiths, it is a geography of lilliputian rooms, each encasing someone working intently with their hands, repairing the tiny hook on an age-worn bracelet, say, or undoing a knot on the frailest of gold chains. Although, this being the “Silicon Valley of India”, the most common sight is of workers tenderly plucking out precious metals from old, discarded motherboards. Set amid all of this, up a flight of six stairs, in a building of small windows is Meppayil’s studio.

In 2013, two of Meppayil’s gesso panels hung beside each other at the Arsenale as part of The Encyclopaedic Palace, curated by Massimiliano Gioni for the 55th Venice Biennale. Meppayil was touted as one of the show’s most “important discoveries”. The following year, she had two solo shows: one at the American Academy in Rome and the second at Pace Gallery in London. Her most recent solo exhibition, which took place earlier this year at GALLERYSKE in New Delhi, brought together a series of gesso panels and cubes. Meppayil (b1965 Bangalore) titles her work strictly as part of a series, with numbers and letters that correspond to her own internal calculations. It seems to imply that each work is in conversation with its previous iteration, as well as the works to follow. This series begins with: d sixty one.

Meppayil’s practice consists of applying, often a hundred times over, thin layers of gesso on to wooden boards. Gesso, traditionally used as a primer to prepare canvases, is made from a mix of chalk, paint pigment and binder, whisked together to make a smooth paste. Meppayil does not mix in paint, or apply washes to the gesso, as layer after layer is meticulously applied over each wooden panel. It is material used to represent itself, giving way to a strange and wistful behaviour, especially in the way with which it settles itself on to the wood, as though each panel is a piece of soft marble, widening its pores to quench a thirst.

Intermittently, Meppayil pulls several thin, thread-like metal wires, tempered to smooth and bend, across the panels. She then carefully ties them together at the back; the knots of which, on closer inspection, have the intricacy of a finely strung wind instrument. She uses copper, or sometimes even silver or gold. During the tempering process, the metals pick up different shades of green and blue, while continuing to oxidise even after the work is complete. After the final layer of gesso has been applied, Meppayil gently scours the surface with sandpaper, to reveal, slowly and purely by chance, fragments of the metal wires encased underneath.

As variations on the same process, other works on display included gesso panels that are carefully, and rather obsessively, indented with the tip of a small goldsmith’s tool known as the “thinnam”, the gesture of an ancient jewellery-making practice of southern India. These tools are long, rectangular metal rods, often merely millimetres wide, traditionally used to decorate gold and silver bangles while the metal is still soft and hot. These accumulated marks on the surface of the wood are reminiscent of the early indentations of Lucio Fontana; works where he repeatedly pierced thin sheets of metal with a sharp pointed tool. Fontana’s work can be read as a meditation on newly industrialised material tensions, whereas Meppayil is concerned with the rhythmic, and percussive, element of an ancient craft. She has written in her notebooks: “The panel filled with tool marks was the abstraction of the tapping sound of the tool. It was interesting to discover that some of the motifs of the tool were related to basic geometric abstract forms.” What is not apparent in the viewing of the work, of course, is this very sonic quality to which Meppayil alludes, which, to her, is integral to the process.

There is a tendency to make Meppayil’s work legible by placing it against the western historical timeline of postwar abstractionism, particularly by comparing it with the work of Sol LeWitt, Agnes Martin and Robert Ryman. There even is a tendency to draw a parallel between Meppayil’s works and the fine line drawings of artist Nasreen Mohamedi. But although both the grid and line are present within the work, presenting formal similarities, the process reveals a narrative that is altogether different. Meppayil’s work speaks to the entanglement of history and tradition, abstracted as a series of gestures that deliver rather effortlessly, and brilliantly, its main principles. In a site-specific work at the Banaglore-based 1 Shanti Road in 2009, entitled Melting Pot (2009), Meppayil used the thinnam to mark chunks of found bricks of old walls, along with charcoal dust and cotton balls dipped in cinnamon oil. “I picked up these pieces … which contain several fossilised layers – smell, touch, sound memory, and loss. I etched them with my goldsmith tools, marks like a prayer, and placed them in the kitchen,” she says.

Meppayil was born into a family of goldsmiths, surrounded by the tools and practices of the trade. By adopting the same techniques, her work seems to bear witness and testimony to this family history and to its artistic tradition – currently at risk because of the industrialisation of Indian craft techniques. It is work that refashions and recontextualises to bring to the foreground labour practices that are otherwise entirely invisible. If one searches online for an image of a thinnam tool, a work of Meppayil’s is the first to show up. It is as though these techniques are disappearing from the modern imagination. This is not to make a nostalgic argument for tradition, but perhaps to elucidate a quality in the work that is rare. Often enough, conversations on Indian traditionalisms centre around what is unbroken, or that which stays the same through time, whereas Meppayil shows us, rather subtly, a successful contemporary rendition of an ancient set of techniques.

Meppayil’s work is difficult photograph, which is an interesting quality for it to have in the 21st century, at a time when images of images and objects have become integral to our understanding and consumption of them. It is thus entirely resistant to image-making, unable to comfortably undergo what has now become an almost fundamental transformation. The only way to witness Meppayil’s work is to stand directly in front of it, and to do so for a while. It is work of deep and calming meditative stillness. It is total abstraction. But also, it is inherently tied to, and contained within, form and process. Meppayil’s wooden panels are not merely the result of marking on a surface, but instead, the crafting of a surface to look as though it has been marked. Once assembled on the canvas, the individual materials appear strong and resolute, bearing little trace of a practice of heightened fragility, probability and tension.

Once, during an art lesson in school, we were asked to paint an egg, precariously balanced on a cup, with a palette that contained no white paint. It was an exercise in “painting light”, the teacher gesticulating at an invisible canvas, to conceive of “form without definition”. As we struggled with our misshapen ovals, what was revealed, instead, was the limit of perspective, and a total illusion of form. Meppayil’s work, rather like the eggshell, is delicate and slight; a porous whiteness enabled by the flat, even light that hangs across from it.