Seth Cluett: The Persistence of Traces

Seth Cluett: The Persistence of Traces

Seth Cluett: The Persistence of Traces includes stand-alone pieces, projection, sound and drawing, and, although the work is fixed in place, a sense of the ephemeral fills the space. Cluett’s work is fleeting yet satisfying. The stripped-back audio is like catching a passing scent of blossom in the park, while the visuals are reminiscent of walking past the same tree time and time again.

Repetition features heavily in the work, leading the viewer to question whether we see more of something from a place of pausing or pacing. Machine-like order and circular pattern is fractured with visuals of nature, while accompanying sounds stream like running water from the corner of the space.

The single-channel video Semblance positions the viewer between observer and the subject being observed, turning the viewer into a voyeur after a few minutes of looking into the trees – with awkwardness at what we could be witnessing behind the branches. The passing fog or steam in the film sweeps through the frame: is it coming from a machine exhaust, a fire, a lake, or a cigarette? Three trees stand strong and static in the midst of everything else that is moving and swaying in the wind, and sounds of trickling water drift from the left of the room along with the smoke. The work is both meditative and enchanting, with a persistent fragility.

Cluett says: “The show is an attempt to reconcile a taxonomy of memory types/ways of memory – I’m trying to understand the role of mediation in human memory and documentary recording technology (photography/drawing/video/sound) as a metaphor/devices for collecting/gathering/capturing. The works look at/listen to the distance between lived-experience and the inaccurate, mis-remembered, faulty, and hyperbolic attempts to think about the effect of time on the actions of the present. These are individual works but are placed in the space in such a way as to create an environment that rewards time and attention and changes when viewed/heard from different positions.”

A series of small delicate drawings on cotton rag paper detail what look like coffee cup rings, but in fact stem from a performance piece where Cluett repeated a circle 100 times. A natural form through a manmade act becomes mechanical – a metaphor for the water cycle, the life cycle, the eye – repeating and retracing itself. It is reminiscent of Sol LeWitt’s instructional patterning or Richard Long’s looped walks and stone circles, which seek to bring structure to the unstructured natural landscape. Cluett here presents the same themes through pared-down technology and aesthetics with audio and film.

This show is a chamber of sounds and silences, retreating from the bustle of the street to a seclusion of subtle undertones, tracking and tracing invisible movements and the unrelenting ephemeral momentum of nature. 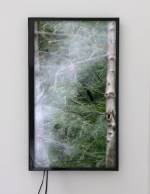