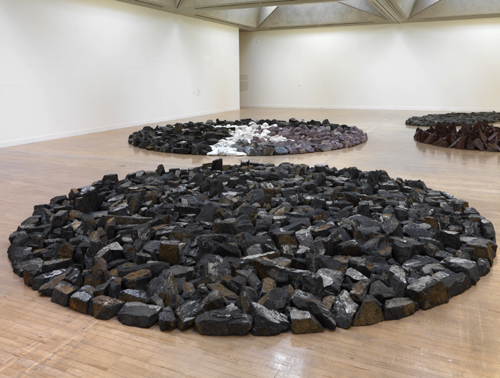 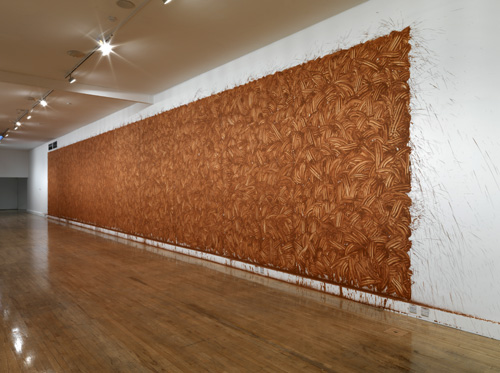 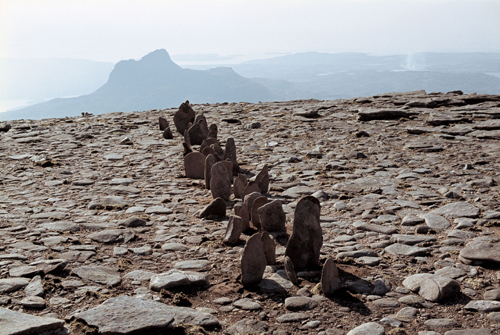 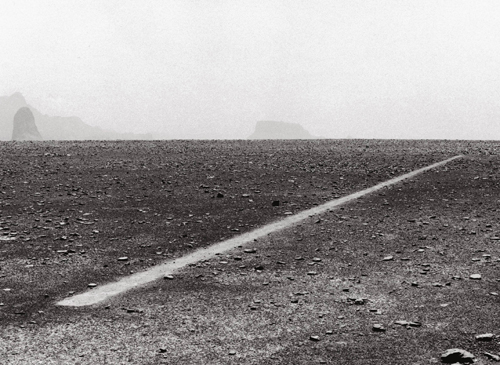 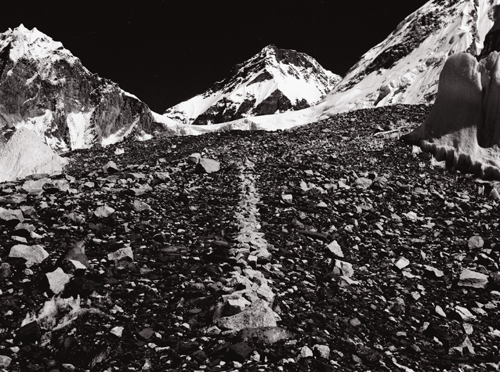 There is a seeming antithesis between the realities of an invasive ‘Time Team’ archaeological intervention at Stonehenge (as witnessed at the end of May on UK TV) and the gently caressing manner in which Richard Long’s works address the English landscape, and indeed the planetary land mass. He too denotes these in terms of stone circles, rocks, or pathways gently laid on the surface, always on the surface. How would Astronaut Long have visited the lunar surface? Far more gently than even gravity absence, allows. On earth, for Long, there is seldom any disruption by digging or excavation. Sometimes these impressions were even made by laying stones under water on a riverbed, as he has in the Little Pigeon River amidst the Great Smoky Mountains in Tennessee. The simple, pioneer namings of the landscape features of the mid-West suit Long’s poetic discourse rather better even than in England. The Three Day Triangular Walk between the Sources of the River Tamar (34 miles): from the source of the River Tamar to Exe Head (41 miles) and from Exe Head to East Dart Head (44 miles) in 1978, do seem needlessly complex and challenging but were there to be achieved.

The early works now hang as photographs in the second and third rooms of the Tate Britain exhibition entitled Richard Long, Heaven and Earth, like explorer’s evidence from nineteenth century expeditions redolent of imperial derring-do: indeed this is a curiously eponymous title for an exhibition so utterly contemporarily of the moment and somehow, far from the core meaning of Long’s work over this retrospective period. Nothing could be less evangelical. Long has in fact single-handedly removed the shackles from sculpture, indoor or outdoor, so creating an art form of the total environment. This subliminal caressing of the earth’s surface takes one straight back to the thought channels say, of Australian Aboriginal painting and land marking.

In Long’s linear creations, often made by the impact of feet compressing ground on a walk, there is, of course, a semblance of infinity. And yet that is very different from the infinity of the pirate’s plank which captives had to walk over the side of a ship. This infinity is about the aftermath of a walking man: he is now striding elsewhere. Long always moves on, and is one or several walks, metaphorically so beyond. But he is there, although he never appears himself in the works, engaged beyond again – over the horizon, mark-making gently for the stars – for posterity’s sake.  There is a cosmic time-frame to these endeavours yet one cannot confuse his work with that of Robert Smithson; Long has always indeed rejected the term ‘land art’, superimposed on him by earlier commentators.

One of the salient aspects of Long’s method has been the ability to walk over forty miles in a given day. So there is a time frame and a distance factor built in, a kind of reality check to his technique. In 1972 he strode from Stonehenge to Glastonbury, westward on a midsummer’s day: latterly on this occasion the lowering afternoon sun must have been a trial. But then this is the striding of a man 6ft 4ins tall. Unlike a conventional drawing skill when the hand and eye are the paramount tools, for Long the combination of legs and feet are all. So the feet are his link with the planet, and therefore the stars and the cosmos. Above everything there is no Beuysian shamanism, as some commentators were keen to impute.

Looking at the elements, Earth, Air, Fire and Water, Long remains solely compatible with Earth and Water. Rivers have been an important element for Long since childhood in the West Country of England, close to the river Avon. Hereabouts too came his first experience of the wild, prehistoric, even primeval landscape of Tor, rock, and heath. His more recent wall works involving mud laid on by hand imprint, are redolent. The marks made by his feet in the flat mud of Patagonia, or the sand of the Sahara Desert embellish and identify otherwise sparse and empty, dehumanised terrain. A recent major exhibition of his work in the National Gallery of Modern Art, Edinburgh allowed a perfect ground surface: flagstones worn down over a century and a half by pupils of the former school building gave a perfect materiality for Long. (Wisely the authorities had left the floor undisturbed in the transition to Gallery). This much will sadly not be possible at Tate Britain, but the exhibition otherwise, with over eighty works, promises to be a landmark. There could not either be a better time for the public to come to imbibe Long’s particular reverence for the earth and the planet, so under threat today. Long feels himself, at 64 years, still to be a son of the 1960s, even though all this has an enhanced meaning today. That was also, it should not be forgotten, the period of Arte Povera, now fortuitously celebrated at Tate Modern down the water.