Tate Britain's important exhibition of Bridget Riley’s painting ends later this month. This is a full retrospective, which was not possible at the recent exhibitions of her work at the Serpentine Gallery in London and the Dia Center for the Arts in New York. The exhibition explores the key phases of Riley's career, beginning with the formative black and white paintings of the 1960s. In these she concentrated on the development of the formal language of shapes. The next phase, which focused on the exploration of colour, was the stripe format paintings. Facing the entrance of the Tate Britain exhibition is Riley’s newest work, a recent large-scale drawing, using line only, made specifically for this show. It is an enormous drawing of circles filling the entire wall from floor to ceiling. Each circle is just under a metre in diameter. They are drawn or painted, with absolute precision, directly onto the wall. Other versions of this dramatic piece have been made in Bern and New York. It is a remarkable and complex work, especially given that Riley is now over 70. 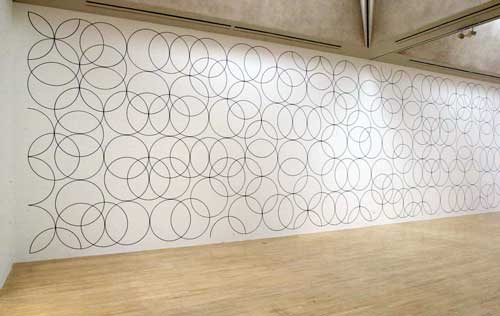 Riley has written on Cézanne, Mondrian, Poussin and Matisse. In 1999 she wrote a short essay on the video installation of American Bruce Nauman. Her words could well describe her own work.

The spectator becomes enveloped and taken to the brink of being over-whelmed by an almost impenetrable multi-layered complex of information … the power of their presence is firmly rooted in rigorously formal articulation.

Riley's paintings are easily recognisable, yet their identification is not down to an individual touch, since she has, from the early 1960s, employed assistants to manufacture her paintings. Based on her studies, drawings, variations and diagrams, the process is, in fact, highly technical. Every colour relationship is measured in terms of its tonal value and the paint is measured for its opacity, the way it flows, its degree of gloss or matte. Every last detail is mapped out and controlled. There is no element left to chance, no reworking. This lack of signature style is essential to Riley’s work. One reviewer described this as a 'must see' exhibition because there is no point looking at Bridget Riley’s work in reproduction for it reduces it to the inspiration level of a tailor's book of swatches! At her 1965 sell-out show in New York, gallery attendants were allowed to wear sunglasses. After her Op Art designs were taken up by fashion designers in the 1960s, she lamented that it would take at least 20 years before her paintings would be taken seriously again. She was also forced to defend her intellectual property in court when her designs were appropriated by designers.

So, almost 40 years later, a major retrospective at Tate Britain is an appropriate, if overdue, accolade. Bridget Riley’s status is assured by this exhibition; she is definitely one of the great abstract artists in Britain and one of the most important women artists. Her independence and the strength she has shown to her artistic convictions is an inspiration. One critic questioned whether Riley’s oeuvre amounts to anything more than 'a tedious formulaic trick … quasi-scientific experiments carried out by someone who drafts her designs … on graph paper'.1 Referring to her 1960s black and white paintings, Tom Lubbock, however, was in no doubt as to the emotional value of her painting:

These pictures are the most boggling, uncontrollable. But if they attack the eyes, that attack is part of the show. It's something to be enjoyed, participated in, taken on as part of the brittle milieu of risk, wit, anxiety, jumpy improvisation, sizzling tension, sudden dissolves and shifts, in which these pictures perform. There’s an exhilarating psychological action at work in their compositions and disorientations - a matter of getting it together, coming apart, going through it, taking corners, speeding up, slowing down, holding on, letting go, getting sucked in, losing it. This is the Riley moment of maximum intensity. Everything afterwards, singing and seductive as it can be, is, more

Although Riley writes convincingly and well about her own work, she has only rarely allowed herself to be interviewed, although before the Tate exhibition she spoke to Richard Cork:

It’s a very unsympathetic time for creative arts at the moment, and dealers have a lot to answer for. The values that a real artist holds have not been in harmony with society.3

One of Britain’s leading abstract artists, Riley is also rooted in the Romantic tradition. Inspired by nature, from the Cornish coast where she grew up, she aspires to translate nature, to find visual equivalents for states of mind. Lubbock describes Riley’s recent work thus:

All the work in the Nineties is only a step from landscape, a glimmering view of leaves and water and light. With the recent emergence of sinuous curves among the diagonals, nature is here in all but name.4

Quoting from his recent interview with Riley, Richard Cork writes:

Because Riley is a methodical painter, who admires Mondrian and Seurat, some critics imagine that her work has always developed in a steady, logical progression. But she is the first to point out that ‘the story told in this exhibition is full of loops and turns. It doesn't proceed in an orderly manner. Some people seem to think I've got it all planned until the year 2020. But you really don't know what's going to happen. I have a hunch that things might go in a certain direction, but sometimes they don't. You can't waste time, and one has to be ruthless with one's work.’5