The National Gallery of Modern Art (NGMA) in Edinburgh, in time for the Edinburgh Festival 2007, is currently staging an outstanding recent retrospective exhibition on Richard Long. There is a curious irony here: never has Long's work been so superbly exhibited anywhere, as in the NGMA's present building - this neo-classical Schinkelesque mid-l9th Century former school building. At the time this building was put at the disposal of the Trustees of the National Gallery, in the mid-l970s, the Property Services Agency (UK) was put in charge of the conversion.

One of the first things which this Government body proposed was the ripping out of the superb, mildly patinated granite floor paving slabs on the central corridor on the grounds that these were of uneven surface. Fortunately, this imbecility, of an enslaved bureaucracy, was stopped by the Trustees and the conservation authorities. So what was almost lost we now see today: a well-used but beautifully polished set of flagstones, utterly harmonious with the work of Richard Long, which can never accordingly have looked better in-situ in a major gallery. In the l970s, and onwards, Studio International was itself highly appreciative of Richard Long's work, including a Scottish cover (Studio International Vol 181, No 933: 'Stones on the Isle of Skye'). This museum, before moving to its new premises here, staged Richard Long's very first museum exhibition in l974. So this exhibition is a true fulfilment on an appropriately grand scale of these early links and ambitions, both on the part of the gallery and of the artist, an exhibition truly originated in Edinburgh. Nor, at least for the moment, is it going anywhere else. But in any case, given the building, it would be hard for any museum of similar distinction to emulate this triumph. Here it should be added that the catalogue, in which Long was himself involved in the composition, is fine, a worthy descendant of Rudi Fuchs' publication for the Solomon R. Guggenheim exhibition of l986. Senior Curator Patrick Elliott has worked this magic. Yet one should add that the exhibition bears all the stamp of distinction of the former Director, Richard Calvocoressi, now of the Henry Moore Foundation. Richard Long, who actually broke a leg walking in the Scottish Highlands only weeks before the opening, truly deserves full credit for his stoical determination to help bring this exhibition to the heights of excellence.

One of the interesting characteristics of Richard Long's work viewed from the 21st Century is that it is truly global, with all that that implies in terms of the world's concern for the planetary condition. Indeed, from the early l970s, when he worked on sites in the Arizona Desert, after Kilimanjaro, Africa (1969), his work has taken in the Andes, Bolivia and Peru (1972), Iceland and Canada (1974), Nepal (1975), Australia (l977), Central Africa (1978), Mexico and Japan (l979), India (2003), Finnish Lapland (1983) and Ladakh (l984). More recently, in the time-frame of the present catalogue and exhibition, there has been a greater focus on European sites: Switzerland, Portugal, Germany, Italy, Sardinia and France, as well as the Napa Valley, California, and Egypt. But of critical importance have been Long's regular landings on English and Scottish sites: the river Avon and the North-West of Scotland, which go back to the beginning of his oeuvre. And what is interesting is that the late-20th Century enthusiasm for 'regionalism' so beloved of politicians and bureaucrats, as well as anthropologists and planners of that period, seems almost wholly irrelevant or superseded in Long's progress. This is demonstrated both through the formal typology of the works, but also in their materiality.

The division of the works into extensive paths, or rectangles, circles and rings, becomes universal in Long's hands across the globe, as does the manipulation, true to whatever physical specification, of stone, slate, wood, and mud in particular. Although 'mud' was used by Long as early as 1969 (in the Konrad Fischer Gallery in Koln in a floor-based work), by 1984 in New York he was dealing with this soft material in a highly expressionist, and also much-controlled handling - a difficult enough combination for an artist - as in 'Throwing Muddy Water' (1984). Now in Edinburgh Long has made a re-application on a circular, radial basis, much similar to his 'River Blackwall Mud Hand Spiral' executed at Lismore Castle in Ireland (2006). Mud links Long back generically to his childhood forays with his father on the banks of the river Avon in England. The works in stone(s) are likewise a recurrent genre in Long's work. Like mud, they spread across the world, deriving from different topologies, path structures and emplacements, stone compositions from granite, to red or black slate, to sandstone, and many others. Long particularly values 'Stone Line', acquired by the NGMA in l980. Here it is in this show, allocated a single long neo-classical double cube space on the gallery's 'piano nobile'. There are two stone works installed externally at the NGMA, as part of the show. Firstly, 'Cornish Slate Cross' (2007), which one can look down on from the room containing 'Stone Line'. Secondly, 'Macduff Circle' (2002), also in the museum's collection. The latter is a smaller precursor to Houghton Hall's 'Full Moon Circle' (2004).

This apparent universality is a global characteristic of Long's work and is particularly relevant today in terms of the present wider quest for cultural meanings valid across the world. 'Regional Art' has been done to death, and nowhere more so than at the 2007 Venice Biennale. For work to have 'regional significance' is tantamount to a 'put-down' in today's critique. Long's full range of work, assiduously generated both inside and outside the gallery, epitomises today's widespread yearning by people to find solace and meaning in natural locations, natural materials. So this exhibition makes a notable milestone and full credit is due to all involved in bringing it to fruition. Let us hope that Richard Long's leg fracture is fully mended, and that he can set off again, as he will. He could survive now permanently as an 'indoors' artist, but that is unlikely. Wherever and whenever the call of the wild beckons, Long will be out there. 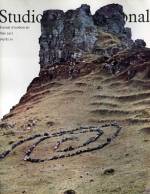