Daniel Buren and his Invention Trajectory

Daniel Buren and his Invention Trajectory

Daniel Buren has had a stimulating and now distinguished continuity in Britain. The arrival of his exhibition, 'Invention II', at Modern Art Oxford recalls a long association, firstly with MOMA Oxford (1973) and in the pages of Studio International. His own texts here are notable for their clarity and perspicacity.

In March 1970, we printed his article 'Beware!', which shook the emergent world of concept art profoundly. He had previously been covered in Studio International in January 1969, followed by June (p. 246: 'Gurgles around the Guggenheim'), then April and Sept/October 1975, with the now historical 'Notes on Work and Installation 1965-75 (p. 124). Much credit must go to the late Editor (to 1975) of Studio International, Peter Townsend, for realising the early importance of Daniel Buren. The liaison could perhaps be claimed to have been a vital one in the recognition of Buren as a major international artist, as was the exhibition at MOMA Oxford in 1973.

Today, Buren, now already in his late 60s, exhibits all the resurgent energy that can regenerate a creative individual, a process described by the late Edward Said in a new posthumous publication, On Late Style:Music and Literature Against the Grain.1 We now see him back in Oxford with a major new series of work. As an artist he has maintained a clear and steady rise through the 1990s and the present decade, to the position of one of France's premier contemporary artists. Back in 1973 he had suspended a series of vertically striped canvases from the superstructure of the spacious first-floor gallery, forming a sequence of free-flowing vertical planar elements, which run across this space totally at right angles to the load-bearing wall structure. In the new work, he establishes a wholly permeable space with great precision, repeating elements of the architecture.

To return to 'Beware', one can see how Buren had established a primary clarity in his thinking to which he has always adhered. ('Beware' was actually originally prepared by Buren for the exhibition 'Conception' at Leverkusen.) Puzzled by the ready adoption in the art world of the use of the word 'concept', Buren sought to rationalise and define what this 'keyword' actually meant. In the Le Petit Robert dictionary for instance, it was defined as an 'abstract general notion or conception'. This did not get the artist anywhere. Use of the term became loosely misunderstood. Buren rightly emphasised how restricted the actual meaning of 'concept' still was. So he went on to define (in 'Beware'), and with great clarity, four different meanings. For example, 'concept could mean Project or could be taken to equal Mannerism', getting closer to reality. But a variant of this usage he defined as 'concept=verbiage', and blamed the perpetrators of 'verbiage art' as only wishing to revive the 18th century.

Where 'concept=idea=art', he identified the most dangerous tendency - that of taking any sort of idea, making art of it and calling it a 'concept'. He then stepped back from the ensuing intellectual trap (which had ensnared many colleagues of the time, many architects, numerous critics, and even more art journalists), where concept becomes elevated to the level of the object as 'concept-object'. Massive numbers of his colleagues had already fallen irretrievably down this crevasse, where they remain today.

It is in that text, too, that Buren famously explained 'What is this work?' (his work of the past four years). The 1973 MOMA Oxford Show revealed exactly what he meant. Buren clarified, through practice, what he had sought to redefine in terms of word meaning. In March 1970, his progress was charted by Michel Claura in Studio International.

There were other references to Daniel Buren in Studio International around this time: namely 'Gurgles Around the Guggenheim', relating to the withdrawal from a show of a Buren work and the cancellation of an exhibition of the work of Hans Haacke. An article by Buren entitled 'Standpoints' re-asserted his name in the same issue of June 1971. These were tremulous times for museums and for artists, as the old guard prepared to shuffle off. In the September/October issue of 1975 (p. 124), Buren was on solid ground again, with an exemplary article entitled, 'Notes on Work in Connection with the Place Where it is Installed, Taken Between 1967-1975.' This was indeed a key period in Buren's career, but one in which he always demonstrated the close connection between theory and practice. Today, Buren's texts of the period are key texts for students.

The 1980s in particular saw a great flowering of Buren's work worldwide and, in 1986 at the Venice Biennale, he was awarded the Golden Lion. His identifying motif has continued to be the stripe, on sails, kites, drums, flags, banners and even on transportation (vertical stripes). Colour has been crucial to Buren throughout his career and he prefers to work 'in situ'. He has remained in the forefront of the continuing debate about the relationship of art to historic buildings.

The exhibition opens at Modern Art Oxford (formerly MOMA Oxford) on 4 November and runs through 28 January 2006. 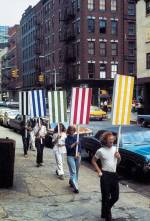 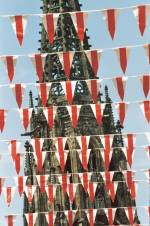 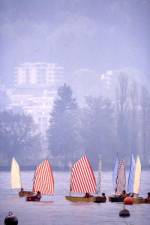 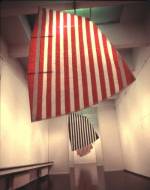