Sarah Sze’s current multi-room installation at the Fabric Workshop and Museum in Philadelphia is the culmination of a five-month residency there. The artist is known for her site-specific work, which engages directly with its architectural setting, using mundane materials ranging from steel ladders to white pills, to create intricate pieces that play with the limits of sculpture.

As an undergraduate, Sze studied architecture and painting, and it is out of these two disciplines that her work is born. Describing her oeuvre as simply installation, or even sculpture, feels confining, as the compositional qualities of the work seem to engage with line and colour in a painterly fashion. Worse still is the temptation to qualify it as collage or even assemblage, and it is here that Kurt Schwitters (1887-1948) provides a helpful example; the artist notably referred to his 2D works – too often simply designated as collage – as merzbild (merzpainting) or merzzeichnung (merzdrawing), taking “merz” from the tail end of the German word commerz meaning commerce. This careful use of language allows for a subtle shift in how we view Schwitters’ output and can help us to understand the way in which Sze takes an architectural space as a blank canvas in which to compose her work.

At the Fabric Workshop, the exhibition is split over three floors: the first, second, and eighth. It is easy to miss the start: a lone desk dramatically lit by a spotlight, with a few carefully arranged mundane objects. That this desk was the beginning of the exhibition really becomes apparent only after the visitor has walked past it into the adjoining room, where a modular wire structure stands as a skeletal double. The second desk (like many desks) holds neatly ordered chaos: newspapers, small pieces of fired clay, plants, strips of blue tape, a water bottle, a clipboard and an Amtrak paper coffee cup are some of the many identifiable objects. Neatly aligned Pantone swatches, which recur on different floors, draw attention to the site of the installation – the Fabric Workshop – and the artistic process of printing. Site is integral to Sze’s work and she often uses space to explore how we assign value to objects. The walls of an art gallery famously provided the setting for the elevation of Duchamp’s urinal to a work of art, and Sze’s compositions draw attention not only to how we assign value to objects, but how we assign it to space. She incorporates utility cupboards into her installations or creates her work in a back staircase. We may walk past the abandoned desk at first, but on our return, it calls for our attention.

Each floor contains a different “experiment,” but motifs, such as copies of the front page of the New York Times, desktop lamps and rocks, reappear across the galleries. In contrast to her recent presentation for the United States Pavilion at the 2013 Venice Biennale – a work that literally spilled out over the roof of the neo-palladian pavilion in a cascade of material into the courtyard, with trompe l’oeil fabricated rocks migrating outside the Giardini to surface in unexpected places atop kiosks or the low-lying roofs of shops throughout the city – the piece on view at the Fabric Workshop is more restrained. Like much of her early work, the compositions are more 2D, tied closely to the gallery floor, never migrating to the walls or ceiling. On the second floor, an assortment of fabricated and natural rocks litter the room, while a line of rectangular printed canvases stand propped against the wall, displaying a range of colour variations of the same print based on the textured surface of a rock. The canvases again draw attention to the process of printing and prompt the visitor to look more closely at the supposed rocks that surround them. Stones hold within them a strange sense of time, almost prehistoric, but also immortal. They are the basic material for the construction of a city – its buildings and its streets – but at their most fundamental level, they belong to nature. Sze describes her work in terms of binaries, between the crafted object and the found object, the natural and the manmade, or micro and macro. All of these are at work here.

As on the first floor, the different layers in Sze’s “experiments” become apparent only after leaving the room. On entering the final gallery on the eighth floor, you realise that the range of scale in the rocks on the second floor have conditioned you to feel more acutely your own size in relation to space. You feel strangely monumental, a giant looking down on a series of front pages of the New York Times, opened, flattened, and pressed into the floor by small rocks or pieces of fired clay, with thick orange cords snaking across them, dramatically lit by an assortment of small desk lamps. Laid precisely in a sweeping diagonal starting thickly at the corner by the window, the papers accentuate the long, narrow space, drawing you first into the corner and then pushing you back and down the long room to view the work. Time is also of vital importance here. The newspapers, ranging from June to October 2013, mark the duration of Sze’s residency at the Fabric Workshop, another reference to the artistic process. Sze has also manipulated these papers, cutting out all the images before laying the sheets over a single large photograph of a natural scene, a body of water, clouds and a starry sky. There is an element of chance in this layering of newspaper and image, as the layout of the front page varies from day to day, and the artist does not always know which section of the new photograph will be highlighted.

The use of photographs is new to Sze’s work, appearing first in her 2010 solo show at Tanya Bonakdar Gallery in New York City. Photographs tie into Sze’s interest in space, but by pairing photographs with newspapers, she introduces an unexpected critical bite to her composition, which is usually absent. The artist describes the creation of her work as being controlled by a set of rules, a nod to the methods of Minimalist artists such as Sol LeWitt, a legacy that becomes more apparent in Sze’s pieces the longer one spends with them. LeWitt was interested in closed systems, and Sze’s strongly formalist compositions feel divorced from outside reference and, at times, almost hermetically sealed. Sze sees the newspapers as universal markers of time and as objects that will position the viewer in a particular place and moment. But newspapers are designed to convey information in a particular order that is readily recognisable in its pairing of image and text to convey fact. By disrupting this system, by cutting out the original images, Sze draws attention to the newspaper as a tightly controlled system. The grid of the newspaper’s design becomes more noticeable, and one feels acutely the disconnect between the word and image, and tries to re-form connections between the two. Fixating on the details may force too close a reading of juxtapositions and miss the point of Sze’s total work, but this chance rupture is intriguing.

In the midst of the seeming profusion of materials, there is an inherent simplicity to Sze’s work. There is an effortless or improvised sense to it at first, but as one looks at it for longer, a systematic method becomes apparent. It is well worth a trip to see the three “experiments”, which at first impress with their physical presence and handling of space; the subtleties come later, after you leave, and they are far more interesting. 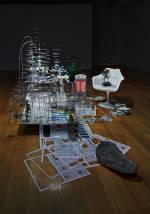 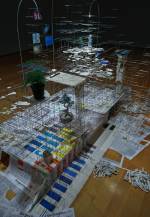 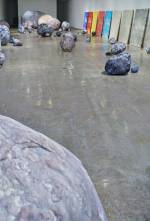