Light rain, heavy traffic and impossibly long queues to access transport marked the Frieze Art Fair’s third iteration on remote Randall’s Island. So did inflation: from last year, bus fares rose from $3  to $7, the number of galleries to 192, the artists to more than 2,300, the show space to 250,000 sq feet, and the catalogue and parking to a hefty $40 each.

For the most part, however, the fair-goers I talked to thought the cost and crowding was justified by the amenities, the food stands, the sheer cheer and space of the bright serpentine tent, and the impact and variety of the art it exhibited.

Few mentioned quality, on the grounds that Frieze is committed to presenting edgy work and young artists, and that the mandate of contemporary art fairs is to present work that grabs attention, not timeless expressions that will hang on tomorrow’s museum walls. One look at how the new consumers dressed to swan down the aisles and you knew they wanted art that was fashionable, not historical.

Given the ease with which the eye-catching pieces flew off the walls, the formula held. Work perceived as trending that sold out the first day included pop comments on Pop (Sylvie Fleury’s life-size crushed car that she painted with pink nail polish and posed against a wall caked with makeup; impeccable fabrication (Anish Kapoor’s shiny discs that danced down every aisle); mannequin sculptures (Chicago imagist Karl Wirsum’s robotic stick figures); body fetish (Guillaume Leblon’s truncated ceramic legs and Jonathan Monk’s kicking ones, Naotaka Hiro’s body casts of himself made with his right hand).

There were a few arresting installations, nonetheless, such as Danh Vo’s floating gilded cardboard segments that comment on moral transgressions, for which the Marian Goodman gallery eliminated its walls; Liu Wei’s architectural Library at Lehmann Maupin that collapses a metropolis to outrageous effect and, among the young artists who showed gripping promise, Aki Sasamoto’s Luncheon Field, which livened the Focus section with a table perforated to suspend forks that bobbed in the breeze of a fan, and Eddie Peake’s rumination on past and future that filled the Lorcan O’Neill booth with a tinted Plexiglas and steel installation involving a bear, a robot and lost Atlantis viewed through a meandering cut-out.

I noted preponderances rather than trends. There were several attempts to burrow down to a perceived reality by peeling back surfaces that had been thickly built up (Nikolas Gambaroff, Dora Longo Bahia, Lionel Maunz). A new focus on ceramics is lifting them from the craft world to art (Patrick Jackson’s thickly glazed mugs, Norbert Prangenberg’s biomorphic shafts, Bettina Samson’s scientific explorations of natural phenomena). That abstract art is back in full force was confirmed by the inclusion of Michelle Grabner – as artist – as well as four artists whose work she had selected – as curator – for the current Whitney Biennial. Still-photography and video were notably underrepresented (losing their lustre or just taking a breather?): stirring exceptions included CT Jasper’s tented installation at the Le Guern booth enfolding a video of a Polish cult film with the figures removed. There was also less than might be expected of 3D scanned material – Sean Townley’s rendering of Thomas Jefferson’s booted calves was one happy exception. There was a smattering of politically driven work, bannered by an astonishing tapestry by Goshka Macuga, woven in Flanders, that depicts her receiving a prize from Noam Chomsky in front of well-heeled collectors and Occupy Wall Street protesters. For the most part, however, statement art was represented by one-liner wordplay, such as Alfredo Jaar’s neon Teach Us To Outgrow Our Madness, or clever commentary such as Pedro Reyes’s instruments fashioned from guns that are “made to be used”, and such dubious efforts as Raqs Media Collective’s re-enactment of a 1948 scene shot by Henri Cartier-Bresson of a bank robbery in Shanghai.

The puns, jabs and jibes were generally well thought out and sometimes well executed, but at one point I sat down with a cappuccino and wondered how much of this work was art? What will most of it mean in five years? Will any of it enter the annals of anything but the purchase regretted? Whether due to a deja vu lassitude that has entered the lexicon as fair fatigue, or to a predominance of work that is flimsy, recycled, appropriated and lazy, there seemed to be a great deal of chaff to separate from the wheat. Struggling to make sense of it all, I dutifully read the mission statements for Conveyor (2013), a readymade conveyor belt that Aaron Flint Jamison has tipped into uselessness, and for activist Paul Chan’s investigations into “when change is catalysed into something neither wholly predictable nor fully determined”. An “oeuvre” by Lutz Bacher at Galerie Buchholz, described as “bracingly diverse”, juxtaposes “humble materials” (slag, rusty metal) to produce “in the gaps and elisions between artworks” an “awareness of the glumly finite”. The nagging feeling that this agglomeration of peeling paint, poured plaster, oozing resin, splintered wood and crayoned rags was destined for the metaphorical dustbin was reinforced by the contrast the next day at Sotheby’s and Christie’s tandem viewings of upcoming sales of contemporary art, which offered gorgeous works by Rothko, Richter, Bacon, Twombly, Kelly, Diebenkorn, Polke – on and on – that left most of the Frieze offerings in the dust.

Exceptions were, by and large, work by the tried and true; an Agnes Martin drawing, an Alex Katz tulip painting, a Barbara Kruger word painting, a Zhan Wang stainless steel totem, Carroll Dunham’s cartoon depictions of bodily boundaries, and, at the Thomas Schulte booth, a shining white steel sculpture by Alice Aycock from her Paper Chase series currently installed on Park Avenue. Curiously, the directors’ stated objective – a show “that really wakes people up” – this year endorsed more than 40 artists born before 1950, several who have died, and quite a few whose work sold so well last year that their galleries brought them back – not a formula, one would think, for new and exciting. Gravitas was well rewarded, however; a wall of Louise Bourgeois gouaches at Hauser & Wirth, an Antony Gormley cast-iron Prop lV at Sean Kelly, a gleaming stainless steel Saint Clair Cemin at Paul Kasmin, and Lygia Clark’s interlocking sculptures – all sold the first day. Curatorship, too, was well served; an impressive number of galleries signed on to the Focus section with solo shows of work too ephemeral, high maintenance, or heavy on concept to be readily collectible. Adding weight was the increasing number of high-profile gallerists who defected to Frieze this year from the storied extravaganza on the piers. Heralding trouble for the Armory Show 2015, Thomas Schulte tested island waters with the Aycock and a strong installation of Allan McCollum’s small, framed “surrogates” and was so delighted with the big tent’s natural lighting and amenities – “next to which the Pier show is a dump” – that, despite his loyalty to its director, he is thinking of returning next year.

The brisk sales impressed all. The disappointing results of Christie’s Post-Impressionist and Modern sale two days earlier had no impact on the buyers straining at the gate to get in, and all around me collectors were tabulating on their mobile phones or exchanging trophy totals – “I bought a Ruscha.” “I bought two.” Aside from a couple of critics, most thought that this year’s offerings were the best yet, and some dealers reported so much business in the first hour as to give many I talked to the impression that the more sought-after work had been pre-sold, a practice that would ban a gallery from fairs such as Art Basel, but that seems to fly here. Although it was said that 20% fewer VIPs had been invited than last year, attendance was high and at a level that the dealers held productive for networking. A glimpse of Leonardo DiCaprio, Uma Thurman and Spike Jonze thrilled the celebrity hounds; the presence of Donna Karan, Marc Jacobs, Raf Simons and Calvin Klein underscored art as fashion; Eli Broad led off the big collectors, and star artists were represented by Eric Fischl, who prowled the aisles with his camera, documenting the fair itself as a big installation as he snapped pictures for his upcoming show on people at art fairs.

There was the usual insider gossip; the speculation that sculpture was conspicuously absent at the entrance because, last year, Paul McCarthy’s in-your-face balloon dog had offended the city, and the power-play certainty that David Zwirner, knowing his booth was placed directly next to Gagosian’s, had deliberately chosen to feature Yayoi Kusama, the artist who had famously left Larry for him.

Did I have a good time? Yes. Was it worth the massive detour? Indeed. Could students afford it? On the Monday, they could buy a $10 ticket that, excepting an overnight stay in the re-creation of Al’s Grand Hotel – which (no kidding) locked you in overnight – included everything on offer – a performance piece by Koki Tanaka involving firefighters and the homeless; an installation by Eduardo Basualdo that mimics the Randall’s Island soccer fields, but blocks both goals with glass, rendering it impossible to use; an immersive environment by Eva Kotátková that situates participants throughout her geometric sculptures; an abbreviated tour of the shore in a boat handcrafted by artist Marie Lorenz, and a mini-music festival staged by Naama Tsabar with underground bands.

Given the huge effort of those tangential happenings it was regrettable that so many felt pressed to move on. The idea may have been to lure a youth culture attuned to art-as-event, but the events that attracted more strongly were elsewhere; the unshaven millennials who exited with me headed right for their bikes, because Frieze week is action week, stocked with satellite fairs spread over daunting distances that each featured a favourite artist or dealer or must-see installation. I, for one, sped down to Pulse to see Thomas Witte’s stencil-themed cut-outs at Davidson Contemporary. Then over to the 26th street Armory to check out the vibrant new Downtown Fair, where veteran dealers and galleries such as Armand Bartos, Nancy Hoffman, Yossi Milo and Cynthia-Reeves were happily ensconced under a vaulting black ceiling that made the art pop like bright stars in a night sky. Finally, a quick run over the Williamsburg Bridge to the condemned Domino Sugar Factory for the stunning tour de force sphinx – its Aunt Jemima head bound in a bandana, its rump fleshing out a scatalogical valentine – that Kara Walker worked from eight tons of white sugar into a stinging visual metaphor for the sugar cane that America’s slaves harvested to enrich their masters and the refined processed sugar that is killing the descendants of both.

The four-day run of Frieze and its satellites did not lack for viewers, but sales tapered off: the big buyers had flown off to the next art fair high – in Hong Kong. 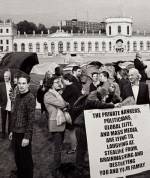 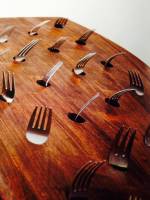 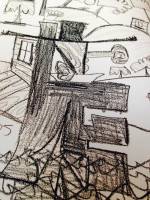 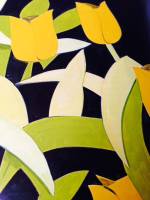 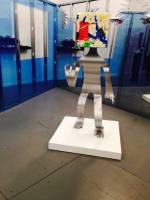 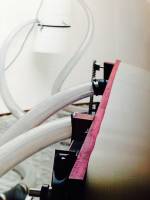 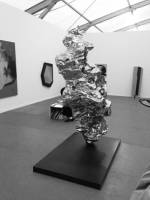 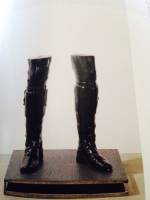 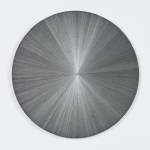