The first Frieze Art Fair, a major new international art fair, took place in London from 17-20 October 2003. Organised by Matthew Slotover and Amanda Sharp, founders of frieze magazine, it was the first ever international contemporary art fair to be staged in London and featured 124 of the world’s leading galleries. New art by over 1000 artists including Tracey Emin, Ed Ruscha, Andy Warhol, Sarah Lucas, Takashi Murakami, Maurizio Cattelan, Damien Hirst and Gerhard Richter was available for sale, ranging in price from £200 to £200,000.

The Frieze Art Fair was housed in a specially designed 11,000 square-metre temporary structure at the south-end of Regent’s Park. The installation was designed by the innovative architect David Adjaye, who has worked on numerous successful collaborations with artists. This was a brilliant project with a wide range of activities - from a programme of video and film presented in a mobile cinema to a superb music programme by eclectic musicians and artists with an interest in music. One hopes this is the first of many superb and enterprising Frieze Art Fairs. Our reviewer, Nick Howard attended:

THE APOTHEOSIS OF SWING - LONDON THOUGHTS ON THE FRIEZE

The Regent’s Park: practical parody (Nash, Nesfield, and the rest of the restoration) defined by its inner and outer circles (Dempster’s rather than Dante’s). And then this.

He walks in, a beautiful day in that beautiful autumn, golds coming, browns holding their own, bronze rabbit letting its languorous ears draw him in, past the orbs last seen beside a Blaine’s crane at Shad, a sunlounger forever turning. He snaps the snappers snapping, walks up the temporary ramps to the temporary structure, is reminded by the last of Herzog & de Meuron’s untreated oak, only to find their comely spinner waiting at the net’s mouth, watching the catch.

This is the real thing, before even the turnstiles have been passed. Was the two-man-tent outside exhibit, exhibitionism, or ex-officio dosser? Just that question justifies the bigger structure’s existence, empty.

Once inside, past the gentle security, he knows it needs no apologist. There’s no music yet, although there will be later, but there seems to be an echo that he can hear from a roof in Saville Row. It’s not so much the sound as the liquidity of optimism, that astounding belief that there are new things, there are surprises, there is a world still to be discovered. Just open up. Apple Corps and its ludicrously naïve vision has just materialised in a Royal Park, 35 years later.

He feels at home despite being surrounded by strangers. Many of the artists are unfamiliar names, yet their work has such context within this place that he cannot but feel that he does know them, that he would be hearing the cock crow if he pretended lack of association. There’s no threat in this environment. That’s left to the pieces. Sometimes, he rounds a corner and has to stop, fighting for breath as formerly putative love turns to passion. Juan Muñoz ravishes his senses with a figure who seems to be the wiseman of the fair. Slogans discard their wordy literalness and hold their risers high beside Picasso. Two children hold adults in a thrall of Mail guilt, waiting for the Daily to arrive. Round every corner c prints remind him that there is a difference between a mortal and an artist, but the line has never been found - so many on the wrong side, yet each one on the right side worth an hour of the others.

This, he sees, is the continuum. He’s known about it, seen it flashing in and out of view, the image stabilising for a moment, but always out of reach in another place, never here.

Now, it has arrived. Those Beatles, given pride of place by Miles in the supporters' club of the sixties, are only visible in a Blurred connection. But this stuff was happening before they did and they knew it and they wanted to be a part of it and so they gave it their blessing.

For London, this is the apotheosis of swing. Once inside the place, he’s in the band and he can’t miss a beat - there are no beats to miss, only tunes to hold, no notes to bum, only riffs to delight. This town has museums. This town has galleries. This town has snobbery. Only the galleries are here, and they had to leave their snobbery behind. The H&M place is meekly buying, delighted to be just a punter, like him.

A Glasgow gallery grunt seems almost in tears as he explains his delight in having travelled the world for so many years to these fairs, and finally to be doing it here.

This is the Stargate. By the time he reads about it, Frieze will have gone. But if he puts it in his diary for next year, maybe it will be there again, and he can discover once more that he knows nothing, and revel in the beginnings of knowledge. 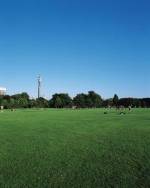