It is only in its third year, but Frieze is already one of the largest contemporary art events in the UK. This year, the organisers expected over 42,000 visitors to pass through the doors of David Adjaye's huge Regent's Park marquee, in a four-day frenzy of wandering, looking, and buying.

With 156 galleries and work by over 2,000 artists clamouring for attention, the atmosphere there this October ranged from intense to feverish. But if you could put up with the crowds, and had no illusions about enjoying a quiet moment in front of a favourite work of art, all the fun of the fair awaited: discoveries, distractions, hubbub, and eventually a headache.

Frieze is, essentially, a trading event, so the products on offer are dictated by the market's trends. This made the fair something of a barometer for current taste, although most of the displays seemed to be following the vogue rather than setting it - the market's innate conservatism coming to the fore. Thus, several of this year's Turner Prize nominees were on show, with Darren Almond especially in evidence. A whole room in the Matthew Marks Gallery was dedicated to his photos and mixed media works, while both Matthew Marks and the White Cube gallery displayed identical copies of his 'Station', a marble dust/resin sculpture in the shape of the British Rail logo.

Elsewhere, Paragon Press had Grayson Perry's 'Print for a Politician' up, a parodic tableau of internecine warfare reminiscent of Brueghel's 'The Triumph of Death' or a Japanese narrative battle painting. A pair of Perry's pots also graced the Victoria Miro Gallery stand, 'An ultimate consumer durable', featuring real and mythical creatures branded with high-fashion names, and 'Quotes from the internet' setting psychoanalytic proverbs among loaded symbols such as crossed rifles and swastika-engraved hearts.

Artists currently exhibiting in London seemed to get a double boost of exposure: photographer Nobuyoshi Araki's work featured heavily at both the Taka Ishii and Galerie Almine Rech stands, while Jan de Cock's series of three big lightboxes, 'Denkmal 7', was given a wall to itself in the Luis Campaña Galerie's arena. There was a well-deserved buzz surrounding the Courtyard Gallery's exhibition of Wang Qingsong's photographs, 'Past, Present and Future', and Cao Fei's video 'COSPlayers'. Wang's photographs restaged Socialist-Realist sculptures of workers and soldiers using actors covered in gilt paint or mud, and featured Wang himself as a bemused-looking tourist, a wounded tribute-bringer, or a participant. Cao's video showed groups of young people dressed as fantastic superheroes, engaging in mock-gladiatorial combat in the strangely deserted environs of Guangzhou, the boom city of southern China. Two robots paced through grassy wastelands with freshly minted skyscrapers as a backdrop, a character with a scythe and cape dodged taxis, and a pair of duelling martial arts experts ran though a sleek modern restaurant. Both artists feature in the Victoria and Albert Museum's exhibition, 'Between Past and Future: New Photography and Video from China' (15 September 2005-15 January 2006).

Although galleries resisted the temptation to pile up their goods as if on a market barrow, there was, inevitably, a surfeit of work. In this unsympathetic context, the art either had to be neon or outstandingly good to command attention. Bruce Nauman's 'Double Poke in the Eye II' fell into the former category, as did 'Alligator with Fibonacci' by Mario Merz and David Batchelor's 'Candelabra III'. These glowing pieces provided solace to a pair of tired eyes that eventually felt that they too had received a double poke.

Solace of another sort was provided by Antony Gormley, who sits firmly in the 'outstandingly good' bracket. Such was the presence and heft of his sculpture, 'Quarters', that, for a few minutes at least, the heat and noise of the marquee faded into a contemplation of the form and colour of rusty iron. Another enjoyable piece was Jim Lambie's 'The Clash' at The Modern Institute, four square, mirrored columns terminating at eye level in unadorned concrete blocks, set into which were upturned shirt collars in blue, turquoise, red and orange - an invigorating juxtaposition of colours, materials and textures. Subodh Gupta, a New Delhi-based artist, was given the run of Art & Public-Cabinet PH's space - to install his wall-mounted 'Curry' series and his free-standing assemblages of stainless steel tiffin carriers, pots and beakers, entitled 'Feast for Hundred and Eight Gods'. The room became the site for a remarkable transformation of everyday Indian utensils.

Sadly, the work of some other great artists was diminished by Frieze's atmosphere. Ian Hamilton Finlay's 'A Place for Light to Land' is a low altar or pedestal, made of Portland stone and worn, yellow-brown bricks. The upper surface is lightly scored with diagonally running lines, and must look beautiful in a natural light. There just wasn't the opportunity to give it the contemplation it invited. Thankfully, the outdoor sculpture area offered a more relaxed space for larger works including Anish Kapoor's 'Marble', a deeply hollowed marble sculpture enjoyed by energetic squirrels, the ladybird inching across its interior, and a security guard hovering nearby. Members of the public were also able to enjoy this art without paying the £15 entrance fee, and approval seemed to be high for the 'big marble bathtub'. Others had to be warned off from trying to climb on the bonnets of Julian Opie's plastic cars, however. Susan Hiller's 'What Every Gardener Knows', a 'garden carillon' sound sculpture, presented the entertaining spectacle of electric organ tones emanating from an herbaceous border, and Mungo Thomson's inflatable rooms were a hit with the small children bouncing around inside them.

Frieze's organisers also commissioned a series of artists to produce work for this year's fair under the banner of 'Frieze Projects'. Three established British artists, Roger Hiorns, Cathy Wilkes, and Donald Urquhart, were given commissions to produce their first short films, screened daily during the event. Hiorns' piece featured the resonant image of the middle finger of one hand clasped in between the knuckles of another, shifting slightly inwards and outwards, accompanied by a lyrical monologue which at times approached Richard Burton's reading of Under Milk Wood in timbre and musicality. The other two films were not as arresting - I preferred Christian Jankowski's slightly bizarre 'Puppet Conference', on show in the two identically arranged stalls of Klosterfelde (Berlin). This cloning idea was the brainchild of Elmgreen & Dragset, who even arranged a look-alike gallery owner. The fact that I didn't spot this detail until the second day says much for the disorientation Frieze induced.

Another project was Michael Beutler's installation 'next to center', a series of box-like spaces constructed from wire mesh and decorated with found pieces of card and brightly coloured paper. As the artist had envisaged, the installation acted as a social space, providing a place for tired fairgoers to hole up and rest, or camp out under its reclaimed awnings and towering cubes. Elsewhere, the Interlopers Hiking Club had erected a sturdier kind of tent, in which the members of this group of US artists/walkers slept out and recovered from their various costumed expeditions around the park and beyond.

Frieze also commissioned four artists to produce what the fair guide called 'Projects using the tour format'. I managed to catch Richard Wentworth's amble around the Regent's Park area, which was for me one of the best events of the weekend. Wentworth's inspiration is London, and his talk illustrated some aspects of the capital's secret nature with a close visual reading of post-boxes, railings, CCTV masts and wing mirrors. His contention was that the city - indeed, the country - has never been very good at being glamorous, and is at heart a make-do-and-mend culture. The repainting of a cast-iron sign, the softening of the points on a row of iron railings, and the fixing of a car's wing mirror with tape were all brought in to bolster his argument. Along the way, he digressed about the messages encoded in the post-boxes, lamps and parish boundary-markers we passed, all the while wearing away the two £5 notes he had glued to the soles of his shoes at the start of the tour.

The walk ended on a small hillock behind the marquee, where Wentworth pointed out another pair of boundary stones, and talked about the city's undertow of administration, the invisible lines of authority running through the grass. Celebration of the unspoken and incidental was the keynote here, and it served as a welcome counterweight to the fair's well-oiled market machinery, far removed from Auden's The Cave of Making where 'Silence/is turned into objects.'1 Indeed, Frieze's main purpose seems to be turning objects into money. This linking of art with finance is a thorny issue, and one bound to raise the hackles of those who think, like Blake, that, 'Where any view of Money exists, Art cannot be carried on'.2 The opposition would claim it is vital for art's facilitation and preservation, and point out that the fair's commissions provide money and exposure for a number of artists and speakers. Either way, this year's event showed, to anyone who doubted it, that money and contemporary art are as closely entwined as ever. 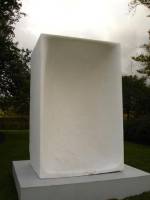 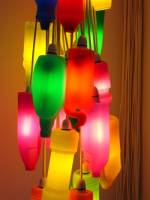 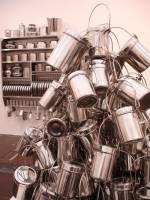 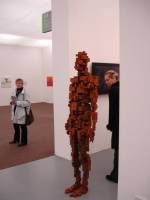