Spanning a wide range of media, this exhibition takes works created since 1969 by 15 artists, each of whom translates the same concept – the form of the line – into a distinct, novel idea

“Obviously,” Sol LeWitt once said, “a drawing of a person is not a real person, but a drawing of a line is a real line.” The energetic works in this group exhibition riff playfully on what a line might be. Curated by Drawing Room, a public gallery dedicated to contemporary drawing, the show features 15 artists’ take on the line, in works spanning a wide range of media, created between 1969 and 2016. From the starkly conceptual to the physically exuberant, it’s a clever idea for a show, full of pieces that challenge and respond to LeWitt’s statement.

The standout piece, in the gallery’s first room, is Monika Grzymala’s Raumzeichnung (outside/inside) – the title literally means “spatial drawing” – a dramatic installation created from seven kilometres of transparent and black sticky tape, which stretches in a sprawling web from the wall to the window. As you look in from the street, the effect is that of a cloud or a jet of water hurled against the window, struggling to escape from the gallery. These physical “lines” have taken on a life of their own, cutting off a corner of the space with their menacing fronds. If the view from the street initiates an inviting connection between inside and outside, the effect is continued as you enter the building: leading in from the door lies Ceal Floyer’s witty installation Taking a Line for a Walk (2008), which plays on Paul Klee’s dictum in Pedagogical Sketchbook that “a line is a dot that went for a walk”. A splashed line of white paint traces a path up the stairs, ending when the paint runs out, as signalled by the presence of the line-painting machine used to create it, which stands abandoned at the end of the upstairs corridor.

Several other works in the exhibition interact specifically, like these, with the interior of the gallery space. LeWitt’s Wall Drawing 157, first drawn according to his instructions in 1973 and now redrawn directly on to the white wall, is an early example of the line as concept. LeWitt, whose first solo show in Britain took place at the Lisson Gallery in 1971, elevated idea over execution, concept over practice; the simple diagonal of his chalked line is mirrored in Fred Sandback’s Untitled, a three-dimensional rod of acrylic yarn that crosses a corner of the gallery, under a spotlight. Describing his work in 1977, Sandback resists the ascribation of meaning to his use of the line. He echoes Klee’s exhortation to his Bauhaus students to “take a line for a walk” just for the sake of the journey, without attempting to describe or represent anything, but merely “moving freely, without goal … my lines aren’t distillations or refinements of anything. They are simple facts, issues of my activity that don’t represent anything beyond themselves.”

Many of the lines in this exhibition are less concrete than these: the shape’s relationship to land art is fruitfully explored by several artists who take the line beyond the gallery walls for walks further afield. K Yoland’s Border Land Other (2013-14) allows us to watch the artist create a line in the landscape: a strangely compelling video and several photographs chronicle the gradual unfurling of a long stream of red paper across a desert. The performance took place during a residency in Marfa, Texas, and the landscape shown marks the border between America and Texas; as the red line floats restlessly, in contrast to the static lines of colour on the horizon as the dust becomes the sky, the viewer is left to reflect on the arbitrariness of borders and human mapping of natural territory.

Diverting the idea of a geographical line in a very different direction, Richard Long’s text-based work A Four Day Walk (1980) documents a linear walk the land art pioneer made that year, distilling a straight stretch of land 94 miles long into a text, printed on the wall, which evokes its sights and sounds: “Road Stony Track Road Grass Field Road Bare Rock Lane Road Stony Path Heather Burnt Moor Stony Path Road.” Next to it, Athanasios Argianas’s Song Machine 19 also uses words to conjure lines, though in a more abstract sense: the artist inscribes thin ribbons of brass, elegantly draped over a steel armature, with descriptions of subjective measurements: “A single endlessly long strand … of the length of your arms, unfolded … the length of a shoelace … of the width of a coral snake curled up.”

The line in Tom Marioni’s joyful photograph One Second Sculpture (1969) takes as its terrain not land, but air: this is another recorded performance, in which the artist threw up a coiled tape measure, which opened up on its descent into a curved line, blurring into the greyscale background. The idea of the line as sculpture, and of sculpture as the lasting legacy of performance, is extended to self-portrait in Jonathan Monk’s Fallen (2006), in which a measurement of rope the same length as the artist’s height is rendered in glass neon tubing and left to curl on the floor. Works by Susan Hiller and Maximilian Schubert, meanwhile, use the line to interrogate the tools of traditional art. Hiller’s Work in Progress (1980) is borne of a week-long performance in which she unravelled a canvas and reconfigured its threads into new forms: a Rapunzel-like braid, or a square curtain of thin ropes, a sort of reconstituted frame. Schubert’s Format L6-BR (2016) comprises a golden steel rectangle, with hinges at each corner that twist the line into a protrusion off the wall, the frame becoming sculpture in its own right.

Each artwork translates the same concept – the form of the line – into a distinct, novel idea. Whether recalling the past or suggesting the future, interrogating the tenets of art itself or exploring landscape, this exhibition is a testimony to the creativity of its participants, and a witty re-evaluation of a simple, expansive and intriguing shape, the canvas for a plethora of possibilities. 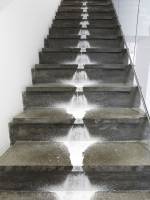 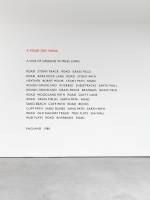 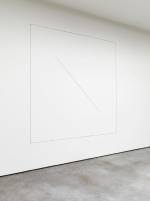 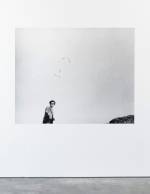