The Deconstructive Impulse: Women Artists Reconfigure the Signs of Power 1973

The Deconstructive Impulse: Women Artists Reconfigure the Signs of Power 1973–1991

Four years ago in their introduction, the authors of After the Revolution: Women Who Transformed Contemporary Art, (also published by Prestel) pointed out that the “fervent, single-minded feminism of the early political phase became more complicated and ambivalent as the women’s movement progressed”. After the Revolution: Women Who Transformed Contemporary Art, has become an indispensable publication for any scholar or artist trying to achieve a well-balanced view of a complex period of cultural history. The Deconstructive Impulse: Women Artists Reconfigure the Signs of Power 1973–1991, also edited by Nancy Princenthal, is a more lavish publication, and in keeping with its excellent title, progresses the debate at the highest level, enabling the work of key women artists to be viewed by a wider public.

This excellent catalogue, a survey of leading women artists from the late 20th century that examines the crucial feminist contribution to the deconstructivist movement, accompanies the exhibition that started at the Neuberger Museum of Art, Purchase College, State University of New York, Purchase (15 January–13 April 2011) and opens later this year at the Nasher Museum of Art at Duke University, Durham, North Carolina (25 August–5 December 2011).

In analyzing the work of these artists The Deconstructive Impulse sheds light on the role of gender in media, entertainment and advertising, and examines the often dangerous prejudices and messages of these media. Flicking through contemporary magazines and films, and according to very recent feminist literature, these biases and stereotypes are prevalent, and so this excellent publication is clearly relevant to modern issues and culture at large.

Deconstructivism, in particular, took these images and ideas apart, quite literally, to show the power imbalances and manipulation of the media throughout the 1970s and 80s, leading to a new awareness of the power of the media, and the power of sexuality in the media – and, significantly, repossessing that power in art. The various female artists discussed in The Deconstructive Impulse have in common the apparent inclination to use images in which women are at first sight submissive or oppressed by gender roles – and to take control of these images by re-appropriating them in their own Art – either laughing at the power imbalance, or exposing seduction as a social manipulation and selling point with problematic undertones. And this fresh perspective on media, art and advertising has, as Posner, one of the writers of the book, points out:

Younger generations of women artists have been the beneficiaries of all the work that was done previously … Feminism has opened up many possibilities for them, so maybe their awareness of being women doesn’t have to be as central as it was a few decades ago. Feminism really has changed the world.

As well as recognising the progress initiated by the Deconstructivists, the essays in The Deconstructive Impulse discuss issues such as the importance of psychoanalytic theory as a critical framework in art and culture, and the sexualisation of inanimate objects – as well as women perceived as “objects”. A compelling, fascinating and very well researched collection of essays, The Deconstructivist Impulse is a relevant, significant survey of some quite revolutionary artists – and necessary for anyone who wishes to gain a deeper understanding of modern art that deals with feminist issues, and indeed modern culture that involves and exploits sexual politics. 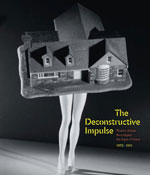