The short life of Egon Shiele (1890–1918) has fascinated historians, critics and artists for many years, so it comes as no surprise that a new publication on Schiele, which focuses on the artist’s development as a portraitist through four principal chronological phases, from 1906 to 1918, is another superb publication. The book accompanies the exhibition at the Belvedere Museum in Vienna (17 February–13 June 2011). It demonstrates how Schiele reinvented the art of portraiture, capturing with great insight and superb draughtsmanship the inner lives of many of his subjects, including himself.

Schiele constantly pushed the boundaries of acceptability with confrontational works, often explicitly erotic and mostly devoid of the traditional props associated with portraiture or the paraphernalia of life, intended to give clues as to the sitter’s personality. By contrast, and using a pared down lexicon of profoundly expressive drawn lines, Schiele’s portraits present an intense insight in to the human condition. The work of Schiele aptly illustrates what in the field of drawing is referred to as “meaningful marks”. It refers to the manner in which drawing (freed from academic convention) is, like music, a most immediate form of human expression. It is appropriate that in the city where Sigmund Freud “invented” psychoanalysis, Schiele should share his incisive ability to see beyond appearances. Transcriptions of his letters are also published, giving a rare insight into his working methods and personality.

Although Schiele famously disliked the traditional syllabus of the Kunstgewerbeschule (School of Arts and Crafts) in Vienna, and embraced the avant-garde and his own ideas rather than follow a more conventional career path as a portrait artist, he nevertheless painted over 100 brilliant portraits before his premature death from influenza aged 28. His life – a rebellious, sometimes chaotic affair that led him from brothels to country escapes to even jail at one point – clearly introduced him to some fascinating characters whose portraits illustrate this new book devoted to such portraiture. Provocative in his art and life Schiele served a prison sentence for having sex with an under-age girl. He employed teenage girls to model for him, which attracted considerable disapproval in the town of Neulengbach, 35 km west of Vienna where he was living with his lover. The judge, in passing a sentence there in 1912 on the charges of “exhibiting erotic drawings in a place accessible to children”, dropped those of seduction and abduction, but actually burned one of the 100 or so “pornographic” works over a candle to illustrate that Schiele’s flouting of convention in this way was unacceptable and illegal.

Schiele was closely in touch with modern developments in psychoanalysis and the deep, conflicted problems in the people he met and drew. His paintings emanate a curiosity and fascination, and this collection shows very clearly his exploration into the human emotions, the complexities and divisions of human personalities, the distance sometimes, and then the closeness, of human relations and possibility of compassion.

His self-portraits, furthermore, evidence a searching desire for understanding, self-analysis, and quite possibly a fair degree of narcissism. Glimpses into the sometimes tortured, occasionally arrogant or maverick images of self are compelling and supremely moving. Schiele brings the viewer close to himself, to his acquaintances, to his loves and the lost, focusing almost entirely on those people, their minds and emotions, notably without any distraction from background or situation. They are writhing emotions, raging people, quintessentially human, in every stroke of pink, amber, ochre and black. His people are silently screaming and singing from the frames of the canvases. Even in reproduction, the images in this book are dramatic. The exhibition beckons. 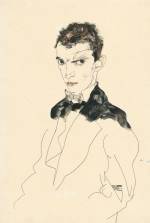 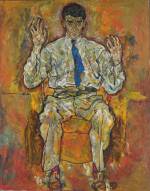 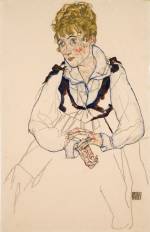 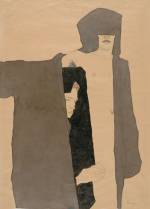 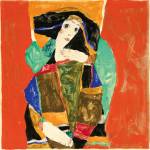