Caught in the back and forth flow of the gaze. “… the AGO has commissioned renowned American artist Barbara Kruger to create a large-scale public installation to be displayed along the Gallery’s signature glass skirt, which spans an entire city block between McCaul and Beverley Streets”
(AGO press release). 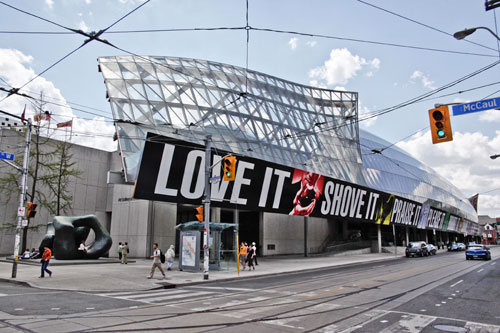 The AGO stands in the China town area of Toronto facing a line of old town houses, now containing a selection of small shops and cafes. This sleepy side of the street is a marked contrast to the newly transformed Frank Gehry designed building and Kruger’s spectacular installation.

Following her studies of art and design at Parsons School of Art in New York City, Barbara Kruger worked at Condé Nast for various magazines, in turn as graphic designer, picture editor and art editor. It is no surprise therefore that her striking use of image and text so strongly references the commercial culture that surrounds and directs us every day. Yet rather than perpetuate our seduction, Kruger now subverts that tantalising language, and placing herself more as poacher than gamekeeper, alerts us to the dangers of being passive in the persistent barrage of commerce driven visualisations.

Utilising the powerful influence of image and text, Kruger provokes our propensity for visual direction:

“I work with pictures and words because they have the ability to determine who we are and who we aren’t.”
(www.barbarakruger.com)

Kruger’s installation Love it, Shove it, Praise it, Please it, Doubt it, Shame it, Blame it, Kiss it, Buy it, Believe it, reads as part contemporary haiku, part cautionary tale and perhaps even a selection of ten deadly sins.

In celebrity endorsement and “must have it” advertising, our culture has accepted a quasi tribal elitist mode of peer pressure, structured in signs throughout our lives. Walter Benjamin, Guy Debord, Jacque Lacan and John Berger all address the entropic condition of commercial culture and the dangers of being caught in the gaze 1.

While the designers of beauty and style have us dancing to their annually renewed tunes, Kruger provokes us to come conscious to our part in this play of style and money.

Advertising, literature, political slogan and film, are woven through Kruger’s practice, her works place us in multi-layered roles, and conjure a wide range of references. For her image of a hand offering a bitten apple, we might be both wicked stepmother and innocents in Eden, while the desire to please and also to be pleased is revealed in the images of hands in prayer, and a women’s face in preparation for surgery.

Kruger’s final image in this installation addresses the push and pull of the gaze, a large eye its pupil circled in rings, is both hypnotised and hypnotising, we are caught in the back and forth flow of the gaze. But Kruger is surely also warning that just as in advertising art also puts us into that receiving believing role, and as conscious audience members we should be aware that while we look, we are being looked at, directed, influenced and dictated to.

1. Walter Benjamin. Art in the Age of Mechanical Reproduction, 1936 available on line at UCLA School of Theatre Film and Television http://www.marxists.org/reference/subject/philosophy/works/ge/benjamin.htm

Jacque Lacan. ‘The Split Between the Eye and the Gaze’ in The Four Fundamental Concepts of Psycho-Analysis, Peregrine Books, 1986, pages 67-78.

Guy Debord. The Society of the Spectacle, 1967 (2002 translation), available on line at The Situationist International