The portrait Rebecca and Matthew (1998), of the art historian Matthew Sturgis and gallery owner Rebecca Hossack, was Abigail McLellan’s first commission when she was just 28 following her study at the Glasgow School of Art; she had grown up in the north of England and then Scotland.

The figures are elongated, and at a distinct distance from the artist, averting close connection, perhaps in awe of the good fortune to have encountered the spirited and generous couple, while she was still in her 20s. It was Hossack’s recognition of the young artist’s talent and passion for life that led her to play a key role in McLellan’s life and to enable her to exhibit on a regular basis. Hossack first encountered McLellan’s work when she visited the studio block that the artist and her partner, Alasdair Wallace, shared, in Glasgow, to select work for an exhibition at her London gallery. In January 1996, Hossack invited McLellan to exhibit in a group show of Scottish artists. She recalls the impact of the work: “For small paintings, they had amazing power. They were very bold in their design choices, and they hummed with these delicious deep colours.” Most of the works sold – and, in response, McLellan painted the studio empty except for an electric bar heater, under a black ceiling (the previous inhabitant of the studio had been a photographer). Empty Studio (1996) and Drums and Jug (1996) exude simplicity, yet they are painstakingly built up using numerous layers and a range of hues to achieve what was, at first glance, a single block of colour. The minimal style was liberating and her subsequent productivity bore testament; further, she cast any caution aside, with respect to subject matter and painted flowers, which she loved, developing a strong and independent manner of working, influenced by Henri Matisse, Howard Hodgkin and mostly by Japanese art and design. At the end of that year, she had a solo exhibition at the Rebecca Hossack Gallery.

Sturgis tells the story of McLellan’s career with the knowledge borne of friendship. A less able author might have erred on the side of nostalgia for this ebullient yet self-deprecating artist, died tragically at the age of 40. Sturgis has made a balanced appraisal of her life and work. As a scholar of 19th-century art, he presents McLellan as an immensely appealing and amusing woman, through a description of her childhood, family and education. He discusses her work from the perspective of her being a “born artist”, one who made images just as she breathed or ate. Having myself known Hossack since the 1970s and now reading Sturgis’s text, it is clear how, as patron and dealer, Hossack’s sustained generosity and enthusiasm impacted on the life of the young artist. McLellan had seven solo exhibitions at the Rebecca Hossack Gallery, London and in each she showed significant progress and a flowering of talent, in a career that spanned a mere 15 years.

Flowers and other natural phenomena were her favourite subjects, and she employed them increasingly to reveal herself. Portraits (including self-portraits) display an insight in to her subjects, such as the student work. Her talent was recognised by several awards and in 1996 by the selection of her work for the BP Portrait Award at the National Gallery in London. Indeed, the painting of her friend Louise wearing a red dress was chosen as one of the works to publicise the show and made into a poster for London Underground. Later, the delicate fan-like fronds were patiently and lovingly created. Sea coral became something of an obsession, perhaps due to the exacting technique she adopted: “For some reason, I thought, I’ve really got to make this as difficult as possible for myself, by not painting the lines and just painting the in-between bits.” Using translucent paint, McLellan used a stippling technique to build up layers to create an intricate negative space, images of a marvellous intensity. Pink Sea Fan (1998) exhibited at her second solo exhibition was bought by Flemings Bank, now The Fleming-Wyfold Art Foundation, known affectionately as the embassy for Scottish art in London.

In 1999, McLellan and Wallace travelled to New York; there her fascination for linear patterning was given great inspiration. Coney Island (1999) is a superb work; her Stripe paintings too, made in the following years, show a fine sensibility and immense promise. On a residency at the famous Cromarty Arts Trust, on the Black Isle, Abigail made a series of landscape studies. They, too, were beautiful “stripe” compositions; Hossack commissioned hand-woven rugs, which subsequently appeared in Interiors and on the cover of Vogue Living.

A trip to Japan in 2000 had been planned when McLellan developed a numb foot and blurred vision in one eye. She was diagnosed with multiple sclerosis, but went ahead with the trip, which she claimed exceeded all expectations. Having long been influenced by the Japanese aesthetic through the work of Charles Rennie Mackintosh (Glasgow School of Art building) and Scottish artist Craigie Aitchison RA, she was deeply impressed by the Japanese national religion, Shinto, with its deep reverence for nature. The impact of ikebana, the art of flower arrangement, was intense with her subsequent work focusing increasingly on single-stemmed blooms, increasingly abstracted. Her palette continued in its intensity, and in her exquisitely balanced compositions she created lasting testament to her spirit and strength. She brought fabrics back from Japan and her 2002 solo exhibition was entitled: Kimono. She adapted her working methods, her studio and her subject matter to accommodate her growing loss of movement and she continued to work. Indeed, her productivity was remarkable given the devastating effects of the disease, and her determination to carry on was by all accounts phenomenal. The portrayal of her remarkable, yet short life in the monograph published by Lund Humphries is now most appropriate and curiously life-affirming, a tribute to friendship. The publication was made in close collaboration with Abigail’s widower, the artist Alasdair Wallace. 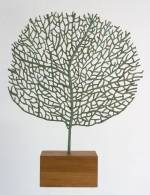