The triennial’s theme is the megacity, imagining what Bruges would be like if the millions of tourists who visit each year were to stay. Alongside three indoor exhibitions, 14 outdoor installations explore global urbanisation

Bruges is to Belgium something like Bath is to the UK: a city steeped in history, whose inhabitants are a little sceptical when it comes to contemporary art. Or this, at least, is the comparison offered by adopted Bruggian, director of Musea Brugge and head curator of the Groeningemuseum and Arentshuis, Till-Holger Borchert, who, along with Michel Dewilde, curator of visual arts at the Cultural Centre, Bruges, has been working hard to bring back to life the Bruges Triennial for the first time since 1974. Borchert, who is better known as a Van Eyck expert and aficionado of Flemish primitivism, confidently says he sees no difference between that kind of art and the über-contemporary public sculptures that have now sprung up across the city for the five-month duration of the triennial.

The triennial’s theme is global urbanisation and the birth of the “megacity” or megalopolis. Bruges itself was preserved and restored to its medieval form in the 19th century, and is thus far from fitting such a category. A relatively small city, with 117,000 inhabitants, 22,000 of whom live in the centre, Bruges welcomes around 5.3 million tourists every year. What would happen, the curators posit, if these visitors all decided to stay? Would Bruges not then be compelled to transform into a modern megacity?

The triennial’s logo, URB EGG, is a playful reversal of the city’s logo (BRUGGE), with urb referring to urbanism and urbanisation and egg to the oval shape of the city centre, described as “het ei van Brugge” (“the Bruges egg”) as early as in the middle ages. More than 40 international artists, architects, scientists and policymakers have been involved in producing work on the theme of the triennial, engaging in a dialogue with Bruges’s rich heritage and history.

Alongside three indoor exhibitions – which present exhilarating architectural visions of imaginary cities; the history of deconstruction and reconstruction of cities in the Middle and Far East; Huib Hoste’s dramatic unrealised modernist plans for a reconstruction of Bruges in the interwar period; and a cleverly curated display of the city morphologies of postmodernist Oswald Mathias Ungers – it is the 14 outdoor installations and interventions that form the mainstay of the triennial. These are arranged in three “archipelagos” distributed across the city in a north-south axis and, although they can all be seen in one day by a steady walker, spreading them over two days would be a more pleasurable option. The triennial guidebook provides a good overview of what there is to be seen, explaining the concepts behind each artist’s work, and also suggests three efficient walking routes.

The idea, as you wander, is to ponder the concept of new citizenship in the megalopolis of Bruges. This begins outside the railway station with The Passage Room by Daniël Dewaele (b1950, Belgium), a sea container converted into an immigration office, where visitors are asked to fill out questionnaires about their expectations of their new place of residence, including what language they would wish to be addressed in, what religion they profess, what currency they would want to use and how they would wish to live.

Palace by Nathan Coley (b1967, UK) goes some way to answering this question by illuminating five key concepts, which he believes necessary for life, high up on the interior walls of the Stadshallen: belief, mind, land, wealth and life. Based on Islamic teaching, the words can be read together as a poem, phrase or motto for the city, or separately, according to each visitor’s wishes. For Coley, the interpretation of his work – understated light sculptures using traditional round light bulbs and eschewing neon – is very much up to the viewers and the stories and associations they bring. Across the city on the Burg, Coley’s second piece, A Place Beyond Belief – the titular words lit up with light bulbs on industrial scaffolding – is a reinstallation of a work he created in response to 9/11, having watched a video of people talking about what they hoped to see at Ground Zero. Here the words appear on the site of a former church, St Donaaskathedraal, destroyed by the French army in 1799. Knowing this, imbues the words with new meaning. Not knowing it, they still take on different shades, transcending place, time and religion.

Across the square, which, flanked by the 14th-century City Hall, is the administrative centre of the city, Rainer Ganahl (b1961, Austria) makes an acerbic comment on contemporary economy with his chocolate replica of the Huis ter Beurze (the former Bruges stock exchange), capped by the revolving statement: Uber Capitalism. Teeth marks in the side of the sculpture, where overenthusiastic visitors have tried to sample the Belgian cocoa product – still, of course, associated with child labour and economic exploitation – are further evidence of the greed of contemporary society.

Vibeke Jensen (b1962, Norway) has also produced a piece that pays homage to a traditional Bruggian industry – that of diamond cutting. Her octagonal sculpture, 1:1 Connect: DiamondScope, stands on the Market Square, facing the iconic Belfry, glimmering in the light, much like a diamond itself. From the outside, all you can see are mirrored surfaces, but go inside and you will find one large facet is actually a one-way mirror. Here, you can sit and look at both the Belfry and the tourists, as they stop to check their hair and lipstick, pose for selfies, and generally play the fool in front of the kaleidoscope. The initial idea was to use the Bruges postcode as an entry code on the door so that only citizens would know the way in. Visitors would then have seen them enter and ask how they might also go inside. This would have sparked a conversation and led to social interaction and integration. Unfortunately, people got frustrated and impatient, hitting away with multiple attempts at the code and tugging at the door. As a result, the codes were removed so that anyone can now enter.

Similar hopes for social interaction have been expressed in the works of Studio Mumbai (b1965, India) and Atelier Bow-Wow (Yoshiharu Tsukamoto, b1965, Japan and Momoyo Kaijima, b1969, Japan), who have created architectural platforms for citizens and tourists alike to enjoy. Studio Mumbai’s Bridge by the Canal, originally intended to span the canal, but now sited beside it, offers a shaded place to sit and chat or have a picnic, while Atelier Bow-Wow’s Canal Swimmer’s Club is a platform stretching out across the water, reclaiming space that even citizens have no current right to (Bruges’ inhabitants are not allowed on the waterways, even if they have a boat – only the 20 tour boats have the right). Swimming in the canals has been back in fashion since the 70s remediation work, but police have the right to insist people leave the water. I didn’t see anyone in there during my visit and certainly wasn’t tempted myself. Nevertheless, the platform, which can also host a bar during events, was popular with teenagers, who lounged about with cigarettes and stereos, if not with hoteliers and residents, who have complained that it spoils their view.

One massive intervention, which hints at environmental destruction, the effects of overpopulation and modern technologies spiralling out of control, is Undercurrent by Hehe, which consists of Helen Evans (b1972, UK) and Heiko Hansen (b1970, Germany). A high-voltage pylon, which has “fallen” into the canal at St John’s Hospital, hums, splutters and hisses with surges of electric current and sporadically shoots flashes of light into the water. In fact, the sound effects run from speakers, and there is no real danger of fried fish. The blatant warning, however, is unsettling.

On a more peaceful note, Wu Wei Er Wei (Doing Nothing Doing) by Song Dong (b1966, China) was conceived of as a Chinese Zen rock garden and is constructed out of windows taken from demolished, historic Chinese buildings, on the site of an old graveyard in front of St Saviour’s Cathedral. While also commenting on the process of urbanisation in China, the work – with its neon words – also calls for inaction, “a form of passive, meditative oneness with the environment”. The structure, which mirrors that of the cathedral, to me recalls Berlin’s Kaiser-Wilhelm-Gedächtniskirche, with its broken spires reaching up into the clouds.

The most charming work of them all is Tree Huts in Bruges by Tadashi Kawamata (b1953, Japan), set in the serenity of the Begijnhof, a 13th-century convent, now home to Benedictine nuns. Kawamata has built eight huts high up in the poplar trees, without a single nail piercing a branch. Pushing the boundaries of art, architecture and nature, Kawamata’s huts – like Coley’s words – take on a different meaning in each location in which they are built. Here, he suggests, they are perhaps halfway houses for the nuns between Earth and heaven, taking them one step higher and closer to God. Certainly, sitting on a bench, in the peace of the courtyard, imagining birds building their nests and creating their own miniature cities up above my head, I was able finally to take some time to consider what it would be like to be a citizen of Bruges and what our continued urbanisation and increasing populations mean for the world at large. Art with meaning. Provocative, both to traditionalist Bruggians, but also to those who engage with the questions being asked. 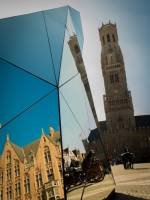 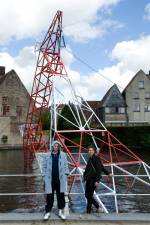 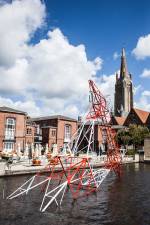 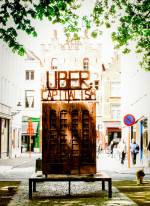 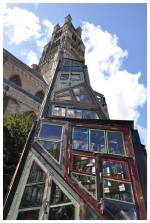